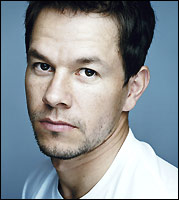 From hip-hop wannabe to Oscar nominee. Now that's what we call progress.

A lot has been made of Mark Wahlberg's body (those turtle-shell abs, that rumored third nipple, for instance). But have you ever studied him above the neck? His eyes are small and intense. His mouth can manufacture a singular scowl. And even in the happiest of times, his nostrils seem flared. Altogether, it's a rocky countenance -- a face only a parole officer could love. But, in more than a decade in movies, Wahlberg has slowly made parole officers of us all.

Tonight, he'll attend the Oscars as a nominee, having played an officer of his own in "The Departed." He's dangerously sardonic in the part, bullying Matt Damon and Leonardo DiCaprio with a barrage of putdowns. The irony of the role was rich. The actor who has spent his career trying to prove himself to Hollywood spends Martin Scorsese's thriller demanding that Damon and DiCaprio prove themselves to him. Judging from the way the final scenes shake out, I don't think he was impressed.

For Wahlberg, "The Departed" doesn't seem much of a stretch. He's playing a Boston cop, and, really, all he probably had to do was remember the gentlemen who arrested him in his days as a juvenile delinquent in Dorchester. But he gave the movie a lot of its authentic sting. And authenticity, of course, is what can break Wahlberg and, as of recently, make him. (Interestingly, "Entourage," the television show Wahlberg created and produces, seems like the Bizarro version of his story: sweet and lackadaisical. It's not him, per se. It's HBO.)

If we're being honest, Wahlberg is a far more convincing actor than he ever was a musician. He didn't rap his lyrics so much as bark them. Marky Mark was a hip-hop gimmick trapped in a house-music moment: the white thug suspended in a state of permanent gay-disco-appropriate shirtlessness. And he had a hard time squaring that with his racist adolescence. Yet he persevered. If the hard look on his face in 1992's "Good Vibrations" video and in "The Marky Mark Workout: Fitness, Form, Focus" didn't say, "I'm a star!" it at least said, "I'm taking my bid for stardom seriously." And by 1996, he'd appeared in a few movies and in a notorious series of Calvin Klein ads that the late Herb Ritts shot. Somehow, he managed to parlay his sex appeal and street cred into a starring role as a nutcase hood obsessed with Reese Witherspoon in a thriller called "Fear."

The movie didn't ask much of him. He wasn't playing a human being so much as he was embodying pure sexual evil. His voice was soft, almost feminine, as he cooed to Witherspoon and sassed William Petersen, who played her distrusting dad. Half the time you could barely hear him. But the message was clear. Even while thrown to his death from a bedroom window, Wahlberg seemed to have taken a page from "Dreamgirls," more or less exclaiming, "You're gonna love me!" as he plunged to the pavement.

Still, that trace of thug in Wahlberg's face and that homeboy aura put a cap on his range, even if he or certain directors thought otherwise. It's easy watching him as a cop opposite Chow Yun-Fat in "The Corruptor," liberating Kuwaitis as a soldier in "Three Kings," stealing from Edward Norton with Mos Def and Charlize Theron in "The Italian Job," or avenging a dead foster mother in "Four Brothers." But Mark Wahlberg has no business in a beret (Jonathan Demme's 2002 film "The Truth About Charlie") or in outer space (Tim Burton's 2001 "Planet of the Apes" remake ).

Both those movies were remakes whose originals starred, respectively, Cary Grant and Charlton Heston. Wahlberg wasn't suave enough for Demme's movie (his American in Paris seemed like a dude on a class trip), although he did seem understandably smitten with Thandie Newton. And he wasn't campy enough for Burton's. It is admirable that Wahlberg dared to play it straight, but he was too macho to register sufficient shock at crashing in a land where Helena Bonham Carter is covered in fur .

The year before, we discovered that he had introverted greatness in him. In James Gray's little-seen crime melodrama, "The Yards," he was exceptional as a bashful ex-con on the run in Queens for a murder he didn't commit. Wahlberg was drowning in notorious method actors (Joaquin Phoenix, Ellen Burstyn, Faye Dunaway, James Caan), who were for once on their best behavior. As he wrestled with the code of thuggery, Wahlberg quietly showed both this man's regret for his stupid choices and the misery of acquiring too much rectitude in a world that doesn't value integrity. It was a Brando part that Wahlberg played like a near-mute James Dean.

No wonder he was so flat in "Planet of the Apes" and "Rock Star," which, nonetheless, had him playing another man trying to prove himself to a skeptical public: Wahlberg made a breakthrough, then wound up in gimmicky kitsch. He also was carrying those movies. Don't let the physique fool you: His strength as a performer doesn't lie in Herculean feats. He's best in a large cast, playing off bigger actors' energies and egos. (See him comically spar with Alec Baldwin in "The Departed.")

Somehow, the idea of Wahlberg as a team player was obvious to David O. Russell, who directed Wahlberg in "Three Kings" and customized a part for him in his next movie, 2004's underappreciated ensemble philosophy farce "I (Heart) Huckabees," in which Wahlberg played a fireman having an ontological crisis. It was a joke, but one Wahlberg sprinted with. The pugilist in him was having an existential fight. And again Wahlberg had something to prove: that he could make us laugh -- on purpose.

Where his work in "The Yards" was about restraint, "Huckabees" was about release. His eyes dart, they squint, they glower, they roll. The inflection and enunciation that eluded him in other parts crackled here. His comic timing was whip-smart, and his sense of humor was physically exuberant, that face of stone and body of steel finally turned to Play-Doh . Russell allowed Wahlberg an arsenal in this movie. He was exasperated, jutting out his lip and furrowing his brow in a fantastic scene at a dinner in the suburbs. He looked like a peeved gorilla.

His fireman's existential confusion was perfect for an actor whose place in the Hollywood universe didn't seem to make sense, maybe even to him. He went nose to nose with Dustin Hoffman and was just as absurdly lunatic. The chip on his shoulder extended to having to share scenes with Jude Law, the prettiest guy in the movies. He decked him at some point, and the symbolism was exciting: Chalk one up for the mook!

In "Huckabees" and "The Departed," Wahlberg is the most intense comedian. He's essentially funny in both movies, but there's an explosiveness roiling within his characters. These are blue-collar roles that don't fall far from his own roots.

It'd be a pity if he got stuck in parts that keep him celibate on screen, however. Not even in "Boogie Nights" was Wahlberg truly sexual. In "Huckabees," he and Naomi Watts share a hilarious kiss that ends in a moment of sincere connection. His next movie, "Shooter," looks like a brawlathon, but it'd be nice to see him turn that brief "Huckabees" encounter into an entire movie. Let Watts or Witherspoon or Newton have another crack at him. Or if he's feeling really frisky: George Clooney.

Wahlberg's newfound command of his entire personality demands more risk and material as good as "The Departed" and Russell's movies. He'll never be Grant or Clooney for that matter. But he is Mark Wahlberg. And suddenly, there is exhilarating possibility in that.