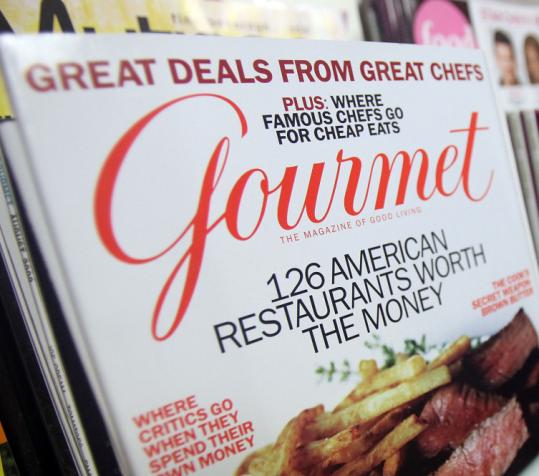 The demise last week of Gourmet magazine, its plug pulled by owner Condé Nast, inspired a Rashomon-like response in the food and media worlds: No one saw it coming, yet everyone saw it coming. Gourmet was stodgy and old-fashioned. Or current and relevant. The magazine was elitist and snobbish. Or, wait, make that democratic and down-to-earth. Gourmet’s death embodies the dumbing down of America. Or the smartening up of a younger foodie generation that wants to participate in the conversation. It declined under charismatic editor Ruth Reichl. Or was Reichl responsible for breathing new life into it?

One response that seems nearly universal: “I’ll tell you, I’m very sad,’’ said Jody Adams, chef and owner of Rialto restaurant in Cambridge. “Sad’’ was perhaps the word used most by food writers, bloggers, chefs, and other figures in the industry.

Even those who found much lacking in Gourmet’s old-media model were hardly dancing on its grave. “I am one of the people who grew up with Gourmet and learned to cook from it,’’ said Chris Amirault, director of operations for eG Forums of the eGullet Society for Culinary Arts & Letters, an online food community (www.egullet.org). But Amirault believes that Gourmet signed its own death warrant by failing to establish a clear identity and not creating a strong enough Web presence.

Even if Gourmet failed to keep up with the times, not everyone saw that as a downfall. “I never thought of Gourmet as cutting edge, God knows,’’ said Gordon Hamersley, chef and owner of Hamersley’s Bistro in the South End. “But I’d hate to think that a little bit of stodginess would have put that magazine out of business.’’ To Hamersley, Gourmet had the kind of quality that never really goes out of style.

Other chefs bristle at the suggestion that there was something musty or dated about the magazine. “Ruth Reichl really elevated it to greatness,’’ said Lydia Shire, longtime Boston chef now at Locke-Ober and Scampo. “You could hardly wait to see what she was going to do in each issue.’’

And the appeal wasn’t necessarily generational. Krista Kranyak, owner of Ten Tables restaurants in Jamaica Plain and Cambridge and a longtime Gourmet reader, said, “I am part of a younger generation - I’m 36 - but I still love to go to bed and flip through a magazine. I think Gourmet was old school, but I appreciate that.’’

As to the oft-heard charge that the magazine was elitist, don’t get Laura Shapiro started. The food historian and author’s recent contribution to Gourmet was a review of the movie “Julie & Julia.’’

“To say that ‘literate’ and ‘intelligent’ is elitist - that’s insane, the way people sling around ‘arugula’ to be synonymous with highfalutin,’’ says Shapiro. “This is another nail in the coffin of literate journalism.’’

Michael and Jane Stern were columnists for Gourmet for 15 years; when news of the closing reached Michael, he was in California researching a piece for the magazine. If the magazine was snobbish, he says, you couldn’t prove it by the Sterns’ Roadfood reports. “Our column, and the things we wrote about, like chili dogs and barbecues, were if anything anti-snob,’’ said Michael Stern. Still, he admits, the term “gourmet’’ may itself point to a residual snobbishness. “To be a gourmet in the ’50s, ’60s, even ’70s, was something to aspire to. Now, a lot of people would be embarrassed to call themselves gourmets.’’

Some wished for a white knight to save the venerable publication, or a government bailout (“Hell, I’d rather put money behind Gourmet than GM,’’ said Hamersley), while others simply felt that Condé Nast could have made a few judicious cuts across the board rather than use a blunt instrument. “I know everyone’s numbers are down. That doesn’t necessarily mandate closing the magazine,’’ said Doe Coover, of the Doe Coover Agency, a literary agent whose clients include the new “Gourmet Today’’ cookbook.

That Condé Nast chose to hold on to competing magazine Bon Appetit caused some consternation. “Bon Appetit’s not especially interesting,’’ said Shire. “It’s for people at the supermarket checkout who want ‘quick and easy’ recipes.’’

Bon Appetit may have broader appeal, but does anyone hold on to dozens of back issues, as many longtime Gourmet subscribers do? Barbara Haber, a food historian and former curator at Harvard’s Schlesinger Library, recalled that at the library, she’d get a call at least once a month, asking if she’d like a donation of old Gourmet magazines. And she’d politely decline, being already in possession of a complete bound set, with index.

Adams was one of those readers who hauled 30 years of Gourmet from home to home, until the archives became available online.

“I tried to donate them, but in the end, I think I just dumped them. My sad friends going to rest,’’ Adams said. “Gourmet will be sorely missed.’’