Blurring in ‘Billionaires’ is no accident 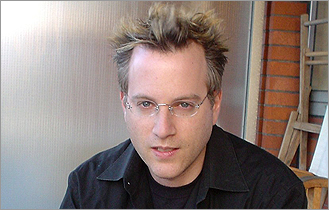 This week, a stack of Ben Mezrich’s “The Accidental Billionaires’’ will be on the new nonfiction table near the entrance of Brookline Booksmith. Eventually, though, after an inevitable ride on bestseller lists, the hardcover about the founding of Facebook by Harvard undergrads will be relocated to a more permanent home. “Then it will just be in the business section,’’ says Dana Brigham, Booksmith’s co-owner and manager.

It sounds straightforward enough. But there are critics who believe “The Accidental Billionaires’’ does not belong in any nonfiction section, not at Booksmith, the chains, or online outlets. Indeed, they want to see Mezrich’s self-described “dramatic, narrative account’’ - a chronicle of geeks and duplicity on the Charles - go straight to fiction.

Mezrich, the Boston-based author of 11 books, including the 2002 hit “Bringing Down the House,’’ on which the movie “21’’ was based, has become a poster boy for the pernicious, wiki-era blurring of fact and fiction. But what’s clear now with “Billionaires’’ is that rather than let criticism of his style nudge him toward either straight fiction or painstakingly reported narrative nonfiction, Mezrich is more determined than ever to create his own category, where fiction and nonfiction coexist not only in the same book and same page, but in the same sentences. On the phone from his book tour, Mezrich says, “I see myself as attempting to break ground. I definitely am trying to create my own genre here. . . . I’m attempting to tell stories in a very new and entertaining way. I see myself as an entertainer.’’

Certainly in this latest book, he sprinkles his energetically written story - subtitled “The Founding of Facebook: A Tale of Sex, Money, Genius, and Betrayal’’ - with juicy bits while tracking the embattled origins of the world-famous online social network. There’s a scene in which founders Mark Zuckerberg and Eduardo Saverin, students whose friendship later broke apart as the business took off, are having sex with women in adjacent bathroom stalls. “His lips found her ear,’’ Mezrich writes about Saverin’s encounter, “and she gasped again.’’ In a statement released last month, Facebook spokesman Elliot Schrage placed Mezrich in the category of tawdry fictioneers: “Ben Mezrich clearly aspires to be the Jackie Collins or Danielle Steele of Silicon Valley.’’

The Boston Globe, as well as Boston magazine, Gawker, The Observer, and other outlets, have more rigorously taken Mezrich to task for scenes and characters he has invent ed in earlier books, particularly in “Bringing Down the House.’’ And it’s already happening with “Billionaires.’’ Mezrich’s claim that Zuckerberg ate koala on the yacht of a Sun Mircosystems exec has been challenged by a number of websites, for example. (Mezrich’s response: “Eventually one of the people who ate koala on that yacht will come forward and say, ‘Yeah, I ate koala on that yacht.’ I have multiple sources who said they ate koala on the yacht.’’)

For some, Mezrich’s style is an unfortunate symptom of our culture’s ever-increasing “truthiness,’’ Stephen Colbert’s satirical word for versions of truth that disregard fact. Truthiness thrives in the new age of the Web, where the delineation between fact and fiction is unclear, says Douglas Brinkley, an author and historian at Rice University. “People rely on Wikipedia, and a lot of it is wrong. But because there it is on the Internet, they assume it’s right. Rumor gets printed as fact. We may have lost our critical facility as a nation.’’

Mezrich’s prose has a cinematic flavor that makes you feel he is writing with a screen option - not a reported set of facts - foremost in mind. And “Billionaires’’ was already on track for a movie adaptation before Mezrich finished writing. Mezrich says he was handing off fresh chapters to screenwriter Aaron Sorkin as he finished them. Did Hollywood’s lure encourage Mezrich to stuff messy reality into a more screenplay-ready story?

H.W. Brands, a University of Texas historian who has written books on Andrew Jackson and Benjamin Franklin, says audiences certainly prefer neat dramatic arcs to the ambiguities of reality. But he resists giving them what they want. “One of the things those of us who practice history find ourselves doing all the time is demonstrating that the world is a lot more complicated than people want to think,’’ he says.

“The Accidental Billionaires’’ has clear moments of invention that make the story more suspenseful and potentially popular. Zuckerberg did not talk to Mezrich, so Mezrich includes gingerly worded scenes in which he describes Zuckerberg alone: “If the newly revived Balzac had been there in that Spartan, claustrophobic dorm, he might have seen Mark head straight for his computer.’’ Mezrich even provides a soundtrack: “We almost hear the James Bond theme running through the kid’s head.’’

In the book’s “Author’s Note,’’ Mezrich spells out his methodology. He admits “details of setting and descriptions have been changed or imagined,’’ and that he does “employ the technique of re-created dialogue.’’

New New Journalism?
Forgiving observers call Mezrich’s approach an extension of a nonfiction tradition that has roots in Greek historian Herodotus and branches in the New Journalism of Hunter S. Thompson and Tom Wolfe. As Thompson wrote in jacket copy for “Fear and Loathing in Las Vegas’’ about his own technique, “In the end I found myself imposing an essentially fictional framework on what began as a piece of straight/crazy journalism.’’ Brinkley sees that fact-fiction tension as a perennial issue: “Every generation, someone does something to blur that line. . . . There’s a great American art form of exaggeration - Mark Twain used it, and certainly Hunter Thompson was adept at it.’’

But when a book is labeled nonfiction, there are standards of fact, and Mezrich’s style challenges them.

Madison Smartt Bell, author of a few historical novels, says in an e-mail: “If you are fictionalizing narratives within recent memory then you don’t have the excuse, because there’s no reason you can’t go and report the story in a factual verifiable way. . . . If the author is making any claim to report events as they in fact happened, he has no right (in my opinion) to fabricate any of it.’’

Mezrich, for his part, has no qualms about his approach, and insists he’s never “made things up out of whole cloth. . . . I firmly believe that what is in this book is what happened.’’

“In terms of a narrative nonfiction book,’’ he says, “when you’re describing scenes that you have multiple sources for, and that you have differing sources for, and you decide to choose a path that puts all that information together, well yeah, there’s definitely going to be a little bit of the author in that. But there’s nothing wrong with that.’’

He says criticism of him is limited to a few in the media. “There are definitely journalists out there who are disturbed by my books because my books are fun and written in this thriller style. And that disturbs some journalists who want it to be written as a documentary. . . . But in terms of readers and publishers and movie studios and everybody else, it’s just not even an issue.’’

Mezrich, a Harvard graduate, considers himself an “immersion journalist’’ who lives “vicariously through the characters’’ to get inside the story. “I’m not embedding myself in Iraq and reporting back to the New York Times,’’ he says. “What I’m doing is reporting a story that took place in the halls of Harvard.’’