But predicts more reductions ahead 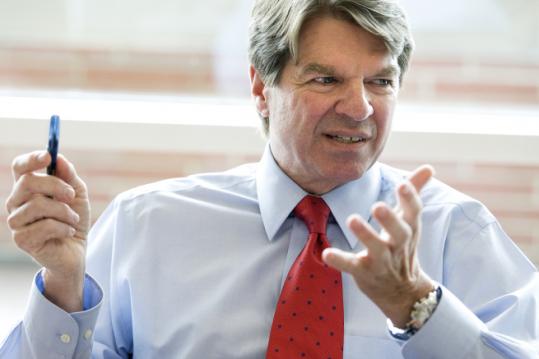 Boston Globe publisher P. Steven Ainsley said yesterday that the threatened shutdown of the newspaper has been "extraordinarily difficult" for readers, advertisers, employees, and him, but the outpouring from the community has underscored the importance of restoring the Globe to financial health.

In his first extensive interview since the Globe's owner, The , threatened to shut the newspaper, Ainsley said he believes it was the Globe's dire financial problems, coupled with a rapidly deteriorating economy, that led to the Times Co.'s ultimatum to the paper's unions to give back $20 million in concessions. He said he expects the Globe will continue to reduce its workforce in the near future in the face of economic and industry downturns, although no specific layoffs are now planned.

He also predicted, assuming union members ratify financial and contract concessions, that the Globe will still be publishing a year from now - and beyond.

"It's more than just a business to us, it's a huge community responsibility that we take seriously," he said. "With some irony, it's been energizing to fully understand how important we are to the community."

As for the frayed community of employees who make up the Globe, Ainsley said he recognizes that it may take time to restore confidence and trust after the stress over possible closure, and the devastating labor-management collisions of recent weeks.

"We do have to have healing," Ainsley said. "We've got to get to the point that we're comfortable with the notion that these type of sacrifices that the company has asked of all of us are worth it, that the larger mission is something that we think is important."

Ainsley, 56, has been the Globe publisher since 2006, when the Times Co. moved him from his job as president of its Florida-based Regional Newspaper Group. Like many newspapers, the Globe has been hit by the migration of readers and advertisers to the Internet and, more recently, the recession.

Ainsley's tenure has been marked by a cycle of falling revenues, followed by job and other cost cuts. In fact, the paper had just completed the reduction of 50 jobs in the newsroom when the Times Co. called union leaders together and threatened to shutter the Globe unless they agreed to major concessions. Ainsley said that decision was made by top executives in New York and that the Globe's losses, coming on top of the dismal first quarter for the Times Co., likely forced their hands. He described it as the likely cause, because he said he doesn't know exactly what the reasoning was.

"That wasn't my call, that wasn't my decision. That was made at the upper reaches of the company so you'd really have to ask them," he said.

In the first quarter, advertising revenue at the Times Co.'s New England Media Group, dominated by the Globe, plunged more than 30 percent compared to a year ago. The paper is projected to lose $85 million this year without significant cost reductions, the Times Co. has said.

"The Globe's a business like any other, and the dollars we've been quoted as losing, $85 million, is a very real number," Ainsley said. "If we could find a means to reduce that fairly dramatically in a short period of time, then the company wanted to give that every opportunity to succeed. [But] they just couldn't sustain those losses."

The shutdown threat has been "extraordinarily difficult" for all employees, managers and union members alike, Ainsley said. But they've also shown resilience, Ainsley said, producing "remarkable journalism" that "continued to establish that the community needs the Globe."

Ainsley said employees have been asked to make considerable sacrifices. Union workers, who still must ratify recently negotiated contracts, face pay cuts from 5 percent to 10 percent, as well as reductions to retirement and other benefits. Managers have already taken a 5 percent pay cut and had their pensions reduced, Ainsley said. They will lose bonuses, or incentive pay, this year.

These sacrifices and the uncertainty of recent weeks have taken a toll, Ainsley acknowledged. He said the steps he's had to take have been the most difficult of his approximately 30-year career in newspapers.

"I've asked every person in this building to make enormous personal sacrifices in the name of this institution," he said. "That's hard to do."

And the sacrifices are probably not over because the underlying causes of the Globe's problems, the changing habits of readers and advertisers, remain, Ainsley said.

"Layoffs or staff reductions or force reductions are probably part of the way we operate this newspaper for at least the foreseeable future," he said.

Ainsley conceded that cutbacks are not the solution to the Globe's and the newspaper industry's woes. While the outlook will improve when the economy recovers, much of the advertising on which newspapers traditionally depended, primarily classified ads for jobs, homes, and cars, won't return.

As a result, the newspaper business model is shifting away from an almost complete dependence on advertising for revenues to one that will have readers pay more. For example, the Globe recently raised the price on single-copy newsstand sales and will soon announce increases in subscription prices, Ainsley said.

One factor in deciding to raise those rates was the outpouring from readers who wrote or called after learning of the closure threat and said they would be willing to pay more. One reader from Mattapan even sent a $50 check to help support the paper.

The Globe, Ainsley said, is studying ways to charge readers of its online affiliate, Boston.com, although it's unclear how that might be done. One method the industry is studying is micropayments, in which readers are charged small amounts when, for example, they click on a story.

But Ainsley said he is skeptical about charging for access to Boston.com, concerned that it would cut the number of visitors to the site, and, as a result, the ad revenue it generates. (Digital advertising, while growing, still generates only about 10 percent of the Globe's revenue.)

"Consumers of the news are going to have to pay more of the cost of producing that journalism," Ainsley said. "Figuring out ways to get more efficient, to get smaller are part of it. But we can't cut ourselves to success. No business can."