Details of pact to be released 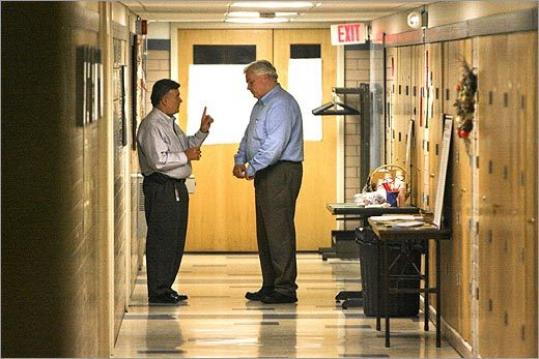 WEYMOUTH - The Boston Globe's largest union reached a tentative deal with the New York Times Co. shortly after 3 a.m. this morning, agreeing to a substantial pay cut, unpaid furloughs, and modifications to the lifetime job guarantee provisions that protect almost 200 employees in the Boston Newspaper Guild, according to sources familiar with the deal.

With the agreement, the guild, representing more than 600 editorial, advertising, and business office employees, became the last of the newspaper's major unions to agree to concessions with the Times Co. The Globe's parent company now has the $20 million in concessions that it demanded a month ago. And perhaps more importantly, the Times Co. succeeded in changing the job guarantee language, which was widely considered a roadblock to any potential sale of New England's largest newspaper.

It was a complex deal, a source with knowledge of the agreement said, with cuts across the board in various compensation and benefits categories. But further details about the changes to job security language and the proposed wage cuts were not available early this morning.

"These negotiations have concluded and we have a proposal to bring before the members of the Boston Newspaper Guild," Totten said. "Out of respect to our members, we will not disclose any details until we meet with membership."

Moments later, the Globe management released a statement: "We have completed negotiations with the guild but have agreed not to release any details until the leadership speaks with guild members on Thursday."

A source familiar with the deal said members would likely know more details in the next day or two.

The Newspaper Guild was the last major union without a tentative agreement after more than a month of high-stakes bargaining to wring $20 million and major contract concessions.

The two sides began the bargaining session last night so far apart that the company had proposed what it called its "last, best offer," deeply slashing wages of guild members by 23 percent to gain the $10 million in concessions, according to union and management representatives with knowledge of the negotiations.

Globe management had also presented that offer of 23 percent in wage cuts during Sunday's marathon negotiating session; it was a move that could have laid the groundwork for management to declare an impasse and unilaterally impose the draconian wage cuts, said Thomas Kohler, a Boston College law professor.

Labor laws allow companies, under certain legal conditions, to impose the terms of their last, best offer if an impasse is reached in negotiations.

In a letter to members sent last night, Totten said the Times Co. not only proposed a 23 percent wage cut but also "intimated that a large layoff can be expected regardless of the outcome of negotiations."

The union on Sunday had offered a proposal that provided, by the union's reckoning, slightly more than $10 million in savings, but management negotiators rejected it. The proposal included a wide range of cuts in pay and benefits, including a 3.5 percent wage reduction for most members, pension cutbacks, and a lengthening of the workweek from 37.5 to 40 hours.

The talks instead became deadlocked over the company's drive to eliminate lifetime job guarantees for about 190 guild employees.

Negotiations between the company and the guild have been laborious and contentious since the Times Co. early last month threatened to shutter the money losing paper unless unions agreed to major financial and contract concessions within 30 days.

The company was prepared to file a 60-day plant closing notice on Monday until Globe management struck deals with three of the paper's four major unions early that morning.

Those union officials have declined to provide details. The agreements still must be ratified by the vote of members of each union.

Like many newspapers, the Globe has been hard-hit by the migration of readers to the Internet and the deep national recession. The Globe is projected to lose $85 million this year without significant cost savings, according to the Times Co.

Advertising revenues for the Times Co.'s New England Media Group, dominated by the Globe, plunged more than 30 percent in the first three months of this year from the same period in 2008.

As negotiations had unfolded, though, contract concessions, particularly on job guarantees, have become as important as the financial givebacks to the Times Co. Eliminating lifetime job guarantees would give management more flexibility in shrinking its staff through layoffs.

Unions have resisted giving up the guarantees, arguing they paid for them with major concessions in years past. For example, the guild gave up a no-layoff clause to get the lifetime guarantees in a contract ratified in 1994.

The issue, however, had divided guild members, creating tensions between young and old, advertising and editorial, union leadership and members. Some guild employees had argued that company is going back on a promise made in exchange for significant concessions by the guild. Others, including some of those with guaranteed positions, thought everything should be on the table to save the paper.

Robert Weisman of the Globe staff contributed to this report.