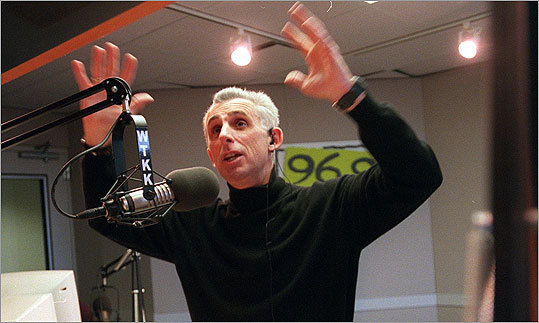 (Globe Staff / Suzanne Kreiter) "There is nothing that I talk about that I don't regard as serious, even when I'm having fun," says Jay Severin.
By Mark Jurkowitz Globe Staff / March 21, 2001

This article originally ran in The Boston Globe on March 21, 2001, and was written by former Globe staffer Mark Jurkowitz.

It's moments before air and WTKK-FM "Extreme Games" host Jay Severin is getting his game face on. "Nobody knows what I'm going to say until 3:06," he remarks, "including me."

But with several piles of newspaper clips chock-full of talk-radio fodder in front of him, Severin actually seems meticulously prepped. Systematically, his monologue marches through a series of topics sure to push some hot buttons.

A story on the Clinton pardon mess leads to a Severin riff on the former first family's assault on "decency." Lieutenant Governor Jane Swift's desire for a State House "lactation center" provokes his ire over the improper use of tax dollars. And he steers Red Sox star Carl Everett's failure to make a spring training bus into an assault on squishy compassion, Jesse Jackson, and rampaging multiculturalism.

"It's Seinfeldian," says Severin during a break, noting that he doesn't have a 10-megaton topic to detonate. "So far, it's been a show about nothing."

Yet nothing Severin does is about nothing, which may explain why he's a red-hot commodity. He's on Talkers magazine's list of 100 top talk hosts and will be featured in Boston magazine's celebration of 100 local movers and shakers. The growing audience for his 3-7 p.m. show makes him WTKK's highest-rated host and has lifted him into a virtual ratings

Meanwhile Severin's love of the rhetorical bombshell - whether calling Hillary Clinton a "lying bitch" or saying Al Gore would strike a Faustian deal to kill a family member in order to be president - attracts the media attention that is manna to any self-respecting talk host.

"He calls himself a rock 'n' roll Republican," says Talkers publisher Michael Harrison. "He has his own style. There's no question he's connecting."

Severin does it by balancing a set of apparent contradictions. He is a stream-of-consciousness talker actually following a savvy script. He cultivates a younger, hipper audience, but shuns the modern trappings of FM "hot talk" - there's no shtick, no sidekicks, no guests. And he's a sex-drugs-and-rock 'n' roll baby boomer who once eulogized Abbie Hoffman, but who now holds liberalism in utter disdain.

Says Bob Newman, head of a firm that books talk-radio guests: "Jay is trying to take the old man's game of talk radio, which is issues talk, and bring it to a younger audience."

But not everyone is a fan. "What concerns me about Jay's show is I think it's offered up as a show about political discussion and politics. It's not. It's entertainment," says Andrea Lee, president of the Greater Boston Chapter of the National Organization for Women. He's "not trashing people's ideas. [He's] trashing them as people."

To the thumping sounds of "Heavy" by Collective Soul, Severin springs into a show like an athlete charging into an arena. Attired in his trademark dark shirt that highlights an athletic physique consistent with a regimen of skiing, climbing, biking, and snowboarding, he is a mass of confident energy. He stands for the entire program, and during musical breaks, plays air guitar with the energy and passion of an adolescent boy.

In truth, Severin's voice and delivery are nothing special. He lacks Jerry Williams's sonorous pipes, Rush Limbaugh's pregnant pauses, or David Brudnoy's erudition. He compensates with attitude, certitude, and most importantly, sheer hard work. Whether it's a monologue or a life insurance ad, Severin sells - and sells hard, the slightly hoarse voice churning without letup.

In admitting that he's no great natural talent, Severin uses a blue-collar analogy that Bruins fans can appreciate. "I try to be Terry O'Reilly," he says. "I have to go out and skate hard on every shift."

A large part of that effort involves the music that Severin uses to lead into the show. It is classic stuff - from James Brown's "Get On the Good Foot" to the Kinks' "All Day and All of the Night" - that helps cement his hipster credentials and gives the program a distinct and fresh feel. (This is a man who has a Tibetan folk song on his cellphone recording.)

The driving tunes also mesh neatly with Severin's hard-edged conservative rap. Jesse Jackson is "a pimp, a race hustler." Severin acknowledges, without apology, that under his own social approach, "the poor and stupid would starve." On a recent show, he sarcastically broached the idea of an "NBA Reading Month," clearly suggesting that players in the African American-dominated league are flummoxed by the printed word.

None of these are exactly fresh targets. Yet as Harrison notes, Severin is not from the "cookie cutter" conservative talk mold. One key reason is his fascination with that three-letter word that scares some conservatives - S-E-X.

Although he spent several decades as a mainstream Republican political consultant, Severin calls himself a "radical libertarian, a libertine," with the emphasis on the latter. In interviews and on the air, he gives the distinct and relentless impression that he can't get his mind off the female form. Even when some women callers during the lactation-room discussion focus on the biological function of mammary glands, Severin can't resist gleefully calling them "fun bags."

Severin's "libertine" persona may explain his secrets. While he openly professes love for his Newfoundland dogs, he refuses to say whether he is married, insisting that "since I talk a lot about boys and girls, I don't want any prejudice attached to my takes on these things." (The betting is he is.)

And he's fudging his age, claiming to be 45, which is the age listed for him in a May 1999 Globe article. Asked about fuzzy math, he laughs and says, "in as much as a lady has the strategic right to lie about her age, a right that extends to one must extend to all."

Born in Manhattan where he lived until about age 30, Severin describes his late father as a "pioneer in direct-mail advertising." His mother, who is still alive, "really is an old beatnik," he says. As a boy, Severin was trained in dance and performed on "The Ed Sullivan Show" and "The Carol Burnett Show." He was in the first class of men at Vassar College and got a master's degree in journalism at Boston University. Somewhere along the line, as a teen, he hooked up with Abbie Hoffman, Jerry Rubin, and the lefty protest scene. Severin proudly notes that in those days, when he sat down at a restuarant with Hoffman and Rubin, he was the one - with his Day-Glo face paint and "hair down to my ass" - deemed too weird to get served.

Several decades later, Severin seems to view Steve Forbes as a political role model. Our "personal freedom" is threatened, he tells listeners, when Washington takes "too much of what we earn."

On the air, Severin tries to juggle ideological preaching with entertainment values, declaring that "if we're learning but not laughing, the show is a failure." That raises the classic question that dogs pro wrestling and talk radio. How much is an act and how much is real?

"Because of the demand of ratings, [talk radio] is an entertainment venue," says Newman. "Jay knows that" and "is trying to incite and trying to do it in an entertaining way."

"There is nothing that I talk about that I don't regard as serious, even when I'm having fun," counters Severin. "I have never and will never utter a word on the program that isn't me. This is not a creation for the ratings."

Severin is also quick to point out that "anyone who listens to this program would have a difficult time believing I'm intolerant." But he loves to demonize his on-air targets. And some who listen to him don't seem convinced.

Boston NAACP president Leonard Alkins says, "We've received numerous complaints, an average of maybe 5-10 calls a day, depending on what the topic is . . . I just remind them of the First Amendment."

Severin's share among the critical 25-54 age demographic in the fall 2000 ratings quadrupled the number he earned a year earlier and clearly makes him the star of WTKK's experiment in FM talk that began in late 1999.

"Fourteen months ago, [WTKK] didn't exist," he recalls. "They took a big chance on me." Adds Peter Smythe, chief operating officer of Greater Media Inc., which owns WTKK: "There were a lot of doubting Thomases."

Not everyone is bullish on Severin and one radio insider thinks his on-air ego needs taming. "Everybody wants to be the next Rush Limbaugh," he says. "But nobody has been."

Severin once told the Globe that he'd love to become "Rush: The Next Generation." That's an apt goal for a man who shares Limbaugh's basic worldview, but who, unlike Limbaugh, cultivates the image of a guy who was there when the Allman Brothers were blaring on the stereo and the bong was making the rounds.

As Dion's girl-chasing golden oldie, "The Wanderer," brings listeners back from a break, Severin points out the lyrics, "I kiss 'em and I love 'em 'cause to me they're all the same."

"What you're listening to is Eminem's grandfather," he says with delight and sarcasm. "This is misogyny, circa 1962."

If there's a key to Severin's success, it may be that he makes listeners feel pretty good about their own journey from hard partying to the Grand Old Party.

© Copyright 2011 Globe Newspaper Company.
The things he says
Controversial statements made by the radio personality and former political consultant Jay Severin. His regret in labeling Hillary Rodham Clinton a ''lying bitch'' is that ''technically, it's a redundancy.''- Quoted by Globe columnist Joan Vennochi, March 2 ''I believe Al Gore would murder his daughter in order to become President.'' When questioned by reporter Dean Johnson, he said he meant it ''at least half-seriously.'' - Boston Herald, Dec. 15 ''I was caught once by a US senator, en flagrante with his daughter in his Capitol Hill office. His reaction was something like, 'As soon as you finish, we need to go over those new poll numbers.' '' - Inside Track, Boston Herald, Nov. 29 ''Hillary Clinton is the Antichrist to anyone who vaguely regards themselves as a Republican. People who despise her will happily give money to derail her.'' - Crain's New York Business, May 29 ''I love girls, I love having sex, and I brag about it.'' - Globe Magazine interview with John Koch, April 2 ''I said Michael Dukakis should be arrested, tried, convicted, and executed as an accessory to murder - until I was educated by a caller. Willie Horton, when he was let out of jail by the governor, only assaulted, knifed, and raped people, but didn't kill them. So I said: 'OK, Dukakis should only be sentenced to prison for a long time.' '' Was that hyperbole, or did you mean it literally? ''Literally.'' also from Koch interview ''Thus, the president of the United States lies under oath, obstructs justice, abuses his office (and, maybe, sells our enemies our secrets for campaign cash). But we don't care. Maxine Waters and Barney Frank are seriously regarded, while Ken Starr is dismissed as a zealot? I am not a religious man, but God help us.'' - Posting on msnbc.com, where he is a commentator, Nov. 20, 1998
Your comment is subject to the rules of our Posting Policy
This comment may appear on your public profile. Public Profile FAQ