With Espionage, Matt Duplessie continues his mission to bring gaming to life 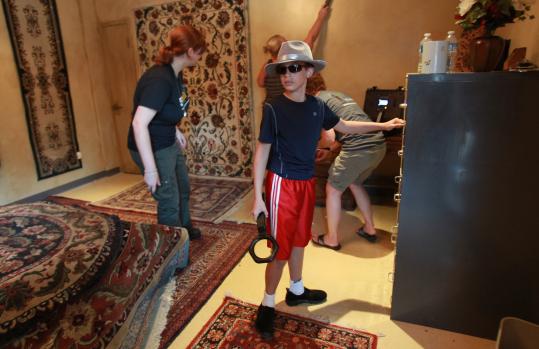 FOXBOROUGH — On a recent Monday, the night before the new James Bond-themed attraction called Espionage was about to open, Matt DuPlessie and his crack team of sleep-deprived engineers had a problem to solve. Most of the show’s technical kinks had been ironed out; just one mission-critical issue remained.

The new Coke machine needed to be debugged.

“How is the line? Is it all clear?’’ asked Lucas Neily, the general manager who’d been sleeping in the new storefront digs at Patriot Place that week.

“It’s mostly water,’’ someone replied. “And it tastes funny.’’

By 10 p.m. everything else was running smoothly, including Espionage’s lasers, video screens, secret doors, music cues, and special effects. But in the weeks to come, DuPlessie, the visionary behind entertainment company 5 Wits, will have bigger riddles to solve.

One: Will fans of Tomb, DuPlessie’s ancient Egypt-themed entertainment experience, located in the Fenway for the past six years, find his latest creation in the entertainment-shopping mecca next to Gillette Stadium?

Two: Will the suburban location beat Tomb’s $1 million annual revenue — justifying the $2 million investment in Espionage and 20,000 Leagues, an under-the-sea-themed attraction still under construction in the same space? (It’s slated to open in November.)

Three: In the Couch Potato Age, when consumers are satisfied to stay home and play Wii, will new customers want to get off their duffs for an experience that makes them interact with strangers, solve puzzles, and use their brains? Which raises perhaps the most vexing question: what the heck to call Espionage and these other, uh, walk-through adventures?

“It’s cryptic,’’ said DuPlessie, 33. “I’m still searching for the one sentence to encapsulate it.’’

Do it yourself
Not quite amusement park rides, DuPlessie’s adventures go beyond taking visitors on a canned trip; the plots depend on how a group performs. Participants move from room to room, solving puzzles as they go. Espionage may be heart-racing and action-packed, but there’s none of the overt violence found in paintball or first-person shooter video games. The interpersonal dynamic is crucial to success.

“The show has been described as a live-action video game,’’ DuPlessie said. Later he says: “It’s like a ‘Choose Your Own Adventure’ book that you are physically in.’’

One recent afternoon, a gaggle of five girls and one mom ventured into Espionage. The pre-teens took about five minutes to solve a touch-screen “gag’’ (as DuPlessie calls them) to shut down a ventilation fan — a puzzle that a certain logic-impaired reporter couldn’t have figured out if he had been given an hour.

“The special effects made me feel like I was in a Hollywood movie,’’ Tess Gundlah, 11, said after her spy team from Sharon spilled into the lobby and gift shop. “Exhilarating is the best way to describe it.’’

Game for anything
DuPlessie has been a lifelong gamer. An Attleboro native who lives in Stoneham with his wife and two children, he tells the story of winning his eighth- and ninth- grade science fairs with a project titled “How to Win at Monopoly With Science.’’

Needless to say, he wasn’t much fun to play that game with. He would have played video games “all the time,’’ he said, if his mother hadn’t intervened. He channeled his geekery, graduating with a mechanical engineering degree from Massachusetts Institute of Technology.

After a stint working in South Florida as a contractor to the and Universal Studios, he earned an MBA from Harvard in 2003, and spent two years developing and launching Tomb.

In between Tomb and Espionage, DuPlessie was hired by the International Spy Museum in Washington, D.C., to design a similar attraction called Operation Spy. He also ramped up 5 Wits Productions, his specialty fabricator shop in Saugus that builds props for clients like Disney, Blue Man Group, and various museums.

His team has learned a lot since Tomb, which closed yesterday for a major rehab after its six-year run. It’s just as well, because in special effects, set design, and wow factor, Espionage blows it away.

As a participant in Espionage, you enter a rug shop “front’’ as an agent hired to infiltrate the HQ of the not-so-nice CABAL Corp., which has stolen blueprints for a communication-jamming spy satellite. As the experience unfolds, your small group collaborates to defuse a bomb, crack a safe, and navigate a dozen crisscrossing green laser beams in a scene right out of “Mission: Impossible.’’ A thudding soundtrack keeps the adrenaline pumping.

A guide — your special operations officer — gives hints and bails you out if you get stuck. The game automatically adjusts its pace and difficulty level according to a group’s skill level or if another team is on its heels. Up to four groups of 15 people can be in the maze of rooms at once, and thanks to an elaborate computer program, they’ll never run into each other.

“You feel nervous,’’ said Melissa Paradise of Sutton. “You don’t know what’s going to happen next.’’

Before you exit, your director rates your group’s spy skills. “We were not considered good spies. They gave us a desk job,’’ said Cindy Paradise, Melissa’s mother. Even through her team didn’t do so well, they had a good time. “It’s fun and intriguing. You’re under the gun.’’

Cool customer
How does DuPlessie gauge his performance as the maker of these worlds? He uses what he calls the smile test. Watching patrons exit, he looks for their reactions.

But there’s something that irks this man who just might change the future of theme park attractions: the terms “immersive’’ and “interactive.’’

“Interactive has lost its meaning,’’ he said.

Strapped into a train at the Magic Kingdom’s various haunted houses and pirate lairs, a customer’s experience never changes. “At Disney, if you weren’t there, it [the ride] wouldn’t be different,’’ DuPlessie said. “If the show is the same can you really call that interactive?’’

Likewise, despite the gorgeous eye-candy of video games, “you’re just twiddling your thumbs,’’ he points out. He wants to do better — to lure families, couples, and corporate groups away from the computer screen and into the role of active do-er. The play on their mythic gridiron about 100 yards away from the 5 Wits storefront, but that’s an experience out of reach to 99.8 percent of us. Here, everyone gets to be the hero.

“What child or adult hasn’t had the fantasy of being in the game?’’ DuPlessie mused, watching another group exit his make-believe world. “To make that come true . . .’’ Then his voice trailed off into reverie.

Ethan Gilsdorf can be reached at www. ethangilsdorf.com.