A conductor and his Wii 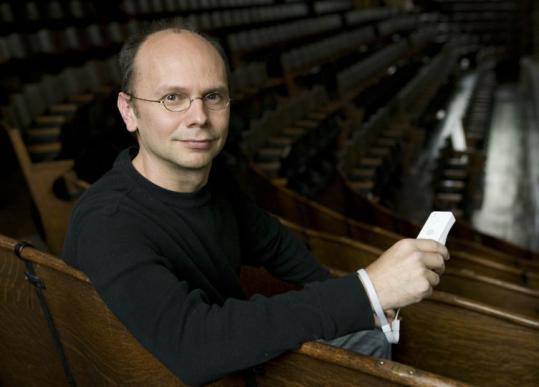 When Paul Henry Smith and the Fauxharmonic Orchestra set up to perform, the sounds made are like no other symphony orchestra. There is no chorus of string instruments tuning, no scooting of chairs, no fluttering of the pages of musical scores. Rather there are just two imperceptible clicks as Smith turns on two computers - a MacPro for the woodwinds and an IMac for everything else.

But the instrumental sounds and full 100-voice choir that Smith then coaxes from the machines, using a Wii controller as his conductor’s baton, sound surprisingly acoustic, live, and real. Smith is quick to point out that the effect does not yet equal the experience of, say, a night at Symphony Hall, but the advancing technology of digital orchestras is rapidly getting closer.

At 3 p.m. Sunday at Brandeis University, you can hear the brave new sound of the digital orchestra for yourself. Smith and his FHO will perform a program that runs from Beethoven’s Symphony No. 2 to the soundtrack to the Final Fantasy VIII video game, as well as works by Weber, Faure, and the premieres of pieces by two students.

Smith, 45, of Brookline, is a classically trained composer and conductor who studied at Oberlin College and Brandeis, and with Leonard Bernstein. We spoke with him about the state of his art.

Q. How common is this technology in the orchestral world?

A. Digital orchestras have been embraced by the film industry. There isn’t a single film score being produced today that doesn’t use in part a digital orchestra. Some use it entirely. On Broadway, they’ll bring in one person to digitally perform five or six instruments along with the live orchestra. Cirque du Soleil does that, too. But there are only a handful who do this live as I do.

Q. Why did you choose to go digital?

A. In 2003, when I started this up, my vision was to be in the service of composers. I offer services to record and perform their works and I think it’s really important to do this. Some people argue that orchestral music is a dying art. I don’t agree with that view, but there’s nothing guaranteed about it lasting forever, and for it to be a viable and lively art form, it needs to have new ideas in play all the time. . . It’s very important to have new composers creating new music. Imagine if no one ever made new films. . . But unfortunately, composers are often discouraged by their teachers and conservatories from writing anything for orchestra rather than for, say, a string quartet, because there are so few opportunities for orchestral works to be performed. . . I think that’s dangerous for the lifeblood for orchestral art moving forward. And now I’m not making a grandiose claim that I can change that, but this sort of thing gives composers a chance to hear and perform their work in a new way.

Q. So while critics of the technology say it is taking away opportunities from performers, you see it as opening new ones?

A. Absolutely, and not just for composers. I recently performed a work with a soloist who had been performing that piece for 15 years, but only with a piano accompaniment. Our concert was her first opportunity to perform it with a full orchestra. . . There are a lot of opportunities for collaboration with other musicians.

Q. Could you explain how this all works?

A. There are four components. First, there are the sound libraries. They are 500 to 600 gigabytes of data on a disc. Each note, on each instrument, each possible way a musician can play it, is recorded as a separate file. So, say a violin playing a C would be recorded soft, loud, mezzo-piano, pizzicato, using the bow, loud sharp attack then fading away. There might be hundreds of recordings of that violin playing C. . . Next, there is software that manages access to that data. . . The third component is like the bow for a violin, it’s something you wield to make the sound happen. For me, that’s the Nintendo wireless controller and I also stand on a Wii balance board. The board senses where and how hard I’m leaning. If I wave my arms faster or slower, that changes the speed, and if I lean toward the phantom areas where the musicians would be in a real orchestra, those instruments become louder. I preprogram the notes to be played into the computer. . . The fourth part is having really good speakers, and that’s very important. . . Bang & Olufsen has provided me with Beolab 5 speakers. The technology in them was developed by a local guy, David Moulton, who lives in Groton. The essence of the technology is that it spreads the sound evenly in a space, so you can create the illusion that the sound is originating across the stage.

Q. So you don’t consider yourself the fifth component?

A. Well like any orchestra, for the music to come together in a compelling way there has to be a musician playing it. I think that’s something that people tend to misunderstand when they say this eliminates musicians. I’m a musician. The orchestra is my instrument.

Q. Where is this all headed?

A. We can start doing things we haven’t even thought of yet with music. For example, one day a digital instrument may know what harmony it’s playing, which isn’t that far off. . . And when an instrument can handle that kind of mechanical concept, it frees up the musicians to think about the next thing. A good analogy is in architecture. Structures like Frank Gehry’s Disney Concert Hall in LA or his Bilbao Museum could not have been created without the use of computers to guide the architectural process. It’s not that Gehry could not have imagined it before. He did, actually. . . But he needed the computer to help him figure out how to build it, and the structural engineering involved was too complicated to do without a computer. So once that design and computing ability was there, Gehry was able to produce works of art the world had never seen before. So that’s the kind of thing the technology ultimately holds in store. Not a dumbing down of music playing, but a freeing of musical minds to go on to other things beyond the mechanics of music.

Samples of music by Paul Henry Smith and his Fauxharmonic Orchestra can be heard online at www.fauxharmonic.com.