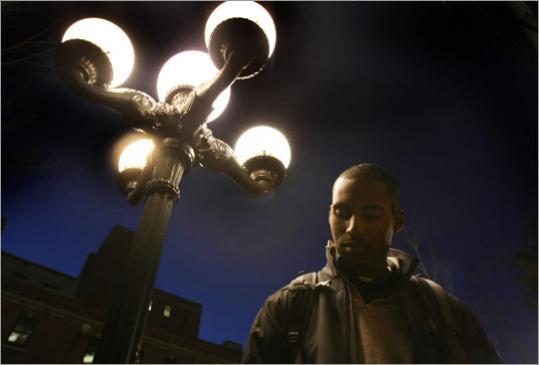 "When you're younger, you're not cognizant of these stereotypes," Jonathan Priester (above) says of video games. "As you grow older it becomes more and more glaring." (Justine Hunt/Globe Staff)
Email|Print|Single Page| Text size – + By Vanessa E. Jones Globe Staff May 5, 2008

By the time Priester was a teenager, he had decided to limit his play to mentally challenging games such as SimCity and Intelligent Qube. The series NBA: The Life alienates Priester because it shows basketball players using their salaries to buy rims and other materialistic goods. "When you're younger," says Priester, now a Boston University sophomore, "you're not cognizant of these stereotypes. As you grow older it becomes more and more glaring." Video games have long had a bad rap for stereotyping women and promoting violence. Grand Theft Auto IV, released last week, is generating controversy for its focus on an Eastern European immigrant who goes on a car theft and murder rampage. But Priester is among a growing number of gamers and scholars criticizing the lack of diversity and high proportion of stereotypes in video games.

It's a sensitive issue. "The subject of racism and games is not really discussed," says Chris Mottes, CEO of the Denmark-based game developer Deadline Games. And when it is, game developers and some gamers usually denounce the complainers as overly sensitive; a common response to critics is that these are "only games."

But the subject continues to resurface as gamers find more reasons to take offense. In a February post on MTV Multiplayer, blogger Tracey John wrote about her experience playing Carnival Games. She could change her character's pants, shirts, shoes, and hairstyles, John wrote. "But when it came to skin color, it only offered different faces in one pale hue. In other words, as a minority (I'm a Chinese woman), I could not replicate my skin color for my avatar within Carnival Games (much less if I were African-American or Hispanic). I found that a bit offensive."

Last year, the trailer for the upcoming Resident Evil 5 depicted a white soldier shooting black zombies. A contributor to the blog Black Looks wrote: "This is problematic on so many levels, including the depiction of Black people as inhuman savages, [and] the killing of Black people by a white man in military clothing . . ." In March the website GameDaily posted an illustrated story about the "most allegedly racist games," which included Uncharted: Drake's Fortune, LocoRoco, Custer's Revenge, Grand Theft Auto: Vice City, and Hitman 2: Silent Assassin.

Karen Dill, a psychology professor at Lenoir-Rhyne College in North Carolina, told the congressional Subcommittee on Commerce, Trade, and Consumer Protection in September that video games blatantly stereotype minorities. A recent study she co-wrote, "Playing With Prejudice: The Prevalence and Consequences of Racial Stereotypes in Videogames," analyzed the representation of minorities in photographs used to promote stories in the top video game magazines published in 2006. The study found black and Latino men were more likely to be portrayed as athletes or aggressors. Black men were less likely to wear protective armor or use technology than whites. Asians were often portrayed as intellectually superior but physically inferior.

Robert Simmons, 21, a Tufts University senior, spends about three hours a day playing video games. The majority are role playing games such as Final Fantasy or Kingdom Hearts and sports games such as the Madden football series. He's also delved into the Grand Theft Auto series, which generated heavy criticism in 2003 because characters in the Vice City edition encourage players to kill Haitians and Cubans. Simmons says the negative images in Grand Theft Auto leave him unmoved. "It doesn't encourage me to buy into the stereotypes," he says.

Dill said in an interview that she gets a lot of resistance from consumers and industry insiders about her findings. "No one wants to believe that the habit they have is harmful," says Dill. "A lot of people think we're saying you play a video game, you grab a gun and start shooting people. We're saying it instigates aggression. . . . This can manifest itself in different ways: a person is more insulting, a person shows someone else less respect in terms of the racial and gender issues. There's a real effect, but it's subtle."

Deadline Games CEO Mottes, a South African who worked in the anti-apartheid movement, took particular offense when his games Total Overdose and Chili Con Carnage were panned for their stereotypical depictions of Mexicans. Mottes's post on gamedaily.com last year delved into the issue of racism and the video game industry: "We have to find the nuances other than to accept that there's no place for these kind of stereotypes or storytelling methods." In an interview, Mottes defended the use of stereotypes as a form of comedy. "I can't think of a comedian or comic movie that doesn't play on stereotypes," he says.

To some, Mottes's argument for the use of stereotypes fails to provide the nuance he accuses his critics of lacking. Latoya Peterson, an avid gamer who wrote about Mottes's post on the blog Racialicious, doesn't think stereotypes can ever be seen as positive. "They say, 'Oh it's just a game, don't worry about it,' " Peterson says. "Wait a minute. The game also is a part of entertainment that . . . informs how you look at things and reinforces mindsets."

When 20-year-old Jonathan Priester was younger, his parents would talk to him about the lack of diversity in video games. They would examine the games he wanted to play. If one contained questionable content, they didn't refuse to buy it. Instead they asked him to justify the purchase.

"In making you talk about it - 'Is that something you would grow up to do? Is it something that's positive?' - you come to the conclusion yourself that maybe this isn't the best," Priester says. "This is how other people could possibly view you. Would you want to be viewed in this manner?"