Local food and craft cocktails at Cook & Brown, the Dorrance 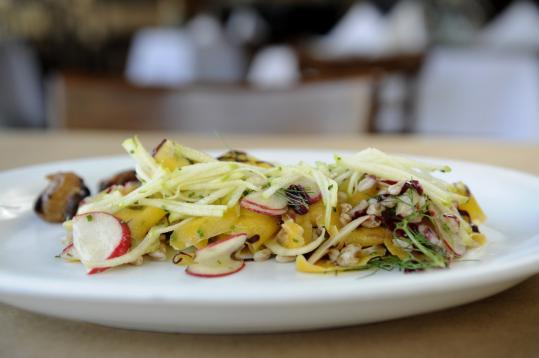 Providence has a rich dining scene of its own. Like Boston, the city is currently riding the twin waves of highly local food and craft cocktails. Two restaurants in this mold are particularly worth the drive, both winners of various accolades and awards: Cook & Brown Public House, which recently celebrated its two-year anniversary, and the Dorrance, which opened in late fall.

Cook & Brown bills itself with the Rorschach description “a modern, New England inspired version of a European gastropub.’’ One interpretation: The cooking is European in technique, the ingredients are regional, the atmosphere is casual, and there is an emphasis on hospitality. A restaurant’s intentions can be measured by the Napkin Index, which slides from small paper squares in dispensers up to voluminous, snowy mini-blankets subject to great ceremony. At Cook & Brown, your cloth napkin is midsize and gets refolded each time you leave the table.

The dining room is open, decorated in warm, neutral tones. The most notable feature is the ceiling, wood in a basket-weave pattern. At the front of the restaurant is a long bar, where fine cocktails are mixed: the tart French Pearl, gin, mint, absinthe, lime, and simple syrup; the smoky Division Bell, mezcal, Aperol, Luxardo maraschino, and lime. Or ask for the bartender’s choice and see what comes your way.

Chef Nemo Bolin, who runs the place with wife, Jenny, has experience at restaurants including No. 9 Park, Craigie Street Bistrot, and Locke-Ober, as well as Rubicon and Chez Papa in San Francisco. His menus change frequently, and his presentations are carefully composed without being ostentatious.

On a recent evening, as winter draws to an earlier-than-usual close, its ingredients are highlighted in a seasonal salad. The sweetness of acorn squash, fennel, apple, and roasted cippolini onions is offset by barley and walnuts. Meanwhile, Rhode Island flounder takes diners into spring. Expertly seared, the fish comes with fingerling potatoes, radishes, sauteed spring greens, and a bright pesto made from radish tops.

Desserts include the likes of rosewater-buttermilk panna cotta with cranberry Linzer cookies and accents of kumquat and pomegranate, or chocolate stout cake with tobacco-bourbon ice cream and bacon bits.

Cook & Brown just introduced weekend tasting menus. A recent version knocked me out: a beautiful salad of razor clams with fennel, radish, and blood oranges; tender grilled Point Judith squid, perked up with chorizo, lime, and cilantro; and a main course of duck. The bird was served two ways - crisp confit, perfect roasted slices - with pea greens, tiny turnips, and moo shu-style pancakes for wrapping. On the side was a little bowl of ginger broth with meatballs. For dessert: butterscotch pudding with apricot and Sichuan peppercorn. A beverage pairing included Champagne Pol Roger, a rich gewurztraminer, a Chassagne-Montrachet premier cru, and a sherry dessert cocktail. Not bad for an extra $35.

Cook & Brown is in northeast Providence, close to Pawtucket, a neighborhood that is walkable and pleasantly small-scale. The Dorrance is located right downtown, a grand space in a former bank. The room invites dancing - long, lined with marble, a balcony overhead. (It can be rented for weddings.) Vast windows incorporate stained glass bank crests, and the coffered ceilings are painted red, with light fixtures in floral medallions. One evening we stumble into a Mardi Gras party; the women in vintage dresses and fascinators and the men in suits and masks look not the least bit out of place.

Sadly, Sukle doesn’t offer reinterpreted stuffies, gaggers, and coffee cabinets. He does remix Rhode Island ingredients with sophistication and just enough heady decadence. Like Bolin, he leans toward the Zen landscape school of plating, ingredients lined up in rows or placed at a distance from one another.

Local pork is condensed into crisp cubes, a more-upscale version of taqueria carnitas, served with a runny poached egg and Brussels sprouts. Tart pickled green tomatoes and XO sauce-inflected mayonnaise take the dish from simply delicious to balanced and interesting.

Chicken ballotine, rich and with skin crisp as spring roll wrappers, pairs with nuggets of sunchoke, radishes, a few leaves of lemony sorrel, and onion soubise - not your average restaurant roast bird. And for sheer loveliness, it is hard to trump the Dorrance’s duck. Dry-aged, the thin slices offer outrageous flavor, lined with a bit of fat and crackling skin; also on the plate are beets, batons of sweet kohlrabi, and gently floral apple-verbena puree. (A hungry person might quibble, however, with the dish’s inclusion in the “larger plates’’ category.)

Sweets aren’t as strong as savory dishes. Served in squiggles across the plate, grapefruit mousse looks more interesting than it tastes (not very much like grapefruit, for one thing). Nor does panna cotta taste much like the tarragon we’re told it’s flavored with, although it’s still quite nice, accompanied by pieces of carrot cake and white chocolate slivers.

But cocktails are a major draw, and on weekends the bar at the Dorrance reflects this. The Westminster Revival is a wonderfully refreshing take on the Corpse Reviver No. 2, flavored with lime, yuzu, and lavender bitters. They should bottle it, to be consumed in emergencies, for those times the spirit flags. The Up N’Cumber is clean and crisp, all cucumber and lime, until the very end of each sip, when a hint of ginger beer reminds you it’s there. Anyone on a budget will appreciate the Six $azerac, a balanced, bourbon-ed version of the New Orleans classic, for $6. The staff is perhaps a bit overly proud of its Perlini, a neato shaker that allows ingredients to be carbonated directly, without the addition of soda water. This results in drinks like the Blast Word, which basically tastes like gin soda.

Were they in Boston, Cook & Brown Public House and the Dorrance would be local favorites. Providence isn’t that far.