Persian cuisine in all its glory at Sabzi 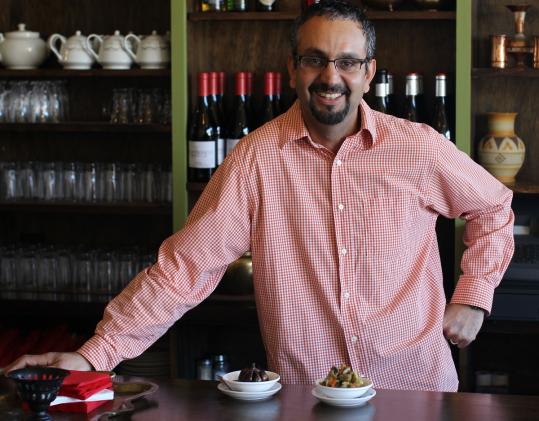 You have to know how the rice is prepared - and rice comes with every entree - in order to fully appreciate the complexity of dishes at Sabzi Persian Chelow Kabab. Co-owner Mehran Khosrowdad, who was born in Tehran, rinses and soaks basmati rice in salted water until the grains turn brilliant white, then cooks it until it’s almost done. At that point, the rice is strained and steamed for 15 minutes. When you get the rice, the first thing you notice is its topping of bright golden grains. These have been mixed with saffron and hot water, and put inside the steaming pot of plain rice, so the saffron perfumes the whole pot.

And that’s just one ingredient.

Beside it on the plate you might see plump, golden pieces of juicy Cornish hen in a dish called kabab-e jujeh, the meat still on the bone ($12.25), marinated in yogurt, lime juice, and saffron; red cabbage pickle; and a roasted tomato (alas, not a great fruit this time of year).

Khosrowdad owns Sabzi with Cyrus Kehyari, who lives in New York. Sabzi means fresh herbs or greenery, says Khosrowdad. The food is a combination of dishes from Khosrowdad’s grandmother, mother, and aunts. “In Persian cuisine, the same dish is made different ways in different regions,’’ he says.

In this new establishment, there are seven appetizers, eight entrees, and one dessert. Yogurt is homemade, and mast-o khiar, in which it’s mixed with cucumbers ($4.75), shows off the thick, barely acidic, delicious yogurt.

Kashk-e bademjan, a dark, roasted and sauteed eggplant spread ($6.25), is deeply flavorful. Kashk is translated as whey, but rather than being the byproduct of cheesemaking, it’s actually made with a soured ingredient such as yogurt, and left to ferment. Khosrowdad mixes the eggplant with kashk and then uses more kashk, which is bright white, to garnish the top. One night my dining companion orders the eggplant as an entree (add $4.50), which comes with rice, tomato, and pickles. She looks very content on the other side of the table.

This and the yogurt dishes are dips for bread, but the thin pita is stale on our visits. On the phone later, Khosrowdad assures me that they are heating it now to avoid that.

Ash-e reshteh, a thick noodle soup with spinach and beans ($4.75) is a hearty little bowl. Torshi, which are pickled vegetables ($3) are very acidic.

Among the entrees, the juicy, bony pieces of Cornish hen might be the best choice, and like all the dishes, they’re made to order. Sabzi kabab ($11.25) is all vegetables - zucchini, portobello, red onion, tomatoes, and peppers - each nicely cooked. You can get this skewer with kubideh, which is ground beef, in the combination plate called Kermani ($15.25; two kubideh are $10.25). Mix and match other kebabs. Persepolis ($15.25) combines ground beef and boneless chicken skewers; Soltani ($16.75) is one ground beef and one chicken skewer. Each is juicy, lightly charred, and beautiful on the plate.

The room, which has 19 seats, has a rustic look, with sand-colored walls decorated with family photographs, paintings by Khosrowdad’s mother, and scenes from Iran. Service is informal, the same glasses used for water are for wine, and the only dessert is something Khosrowdad calls “finger baklava,’’ small pieces of crisp walnut, pistachio, and almond pastries ($4 for 4) to pick up in your hand.

One night, we order a pot of Persian tea. The tags from two tea bags dangle out of the top of the pot, the water is lukewarm, and the price is $8. Khosrowdad says they’re learning as they go. Better bread and brewed tea would make this little spot just about perfect.