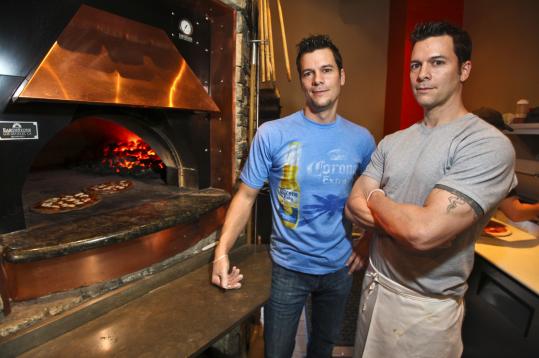 A warning: The dining room at Max and Leo’s Artisan Pizza, opened in November, is as big as a minute. There are eight bar stools and two tables, yielding a grand total of 16 seats. And the very cozy, friendly spot in Newton Corner, with the warmth of a handsome coal-fired oven and its diffused heat, makes diners want to stay.

You have to decide if this pizza is for you. The top of the menu reads: “All Our Pizzas are cooked WELL DONE.’’ By that, identical twins Maximilian “Max’’ Candidus and Pantaleon “Leo’’ Candidus really mean blistered, with plenty of charred spots. The crust is thin and so incredibly crisp you can almost hear a crackle when you bite into it. If pizza can be described as exquisite, this is exquisite pizza.

Thin crust pies have their fans, so the brothers weren’t afraid to open a few doors down from a Pizzeria Uno and around the corner from a Bertucci’s. “I wasn’t that concerned because I lived here all my life and I thought our product was different,’’ says Max Candidus. When customers complain that a pizza crust has some blackened edges and isn’t soft, the owners might direct them to one of the neighboring establishments.

The twins, 43, were raised in Newton and have been running a mobile pizza catering trailer, with an identical coal-fired oven, for two years, from spring to fall. The idea was to perfect the pizza before they opened a restaurant, says Max Candidus. They spent a year creating pizzas and getting the oven temperature right. It takes two minutes to cook a pizza, but the brothers prefer to leave the rounds in the oven for 3 1/4 to 4 minutes (that’s the “well done’’ part). The oven fires to 900 degrees. The partners have also been in the automobile business for 18 years and own a car dealership in Hudson, N.H., where they specialize in wholesale transactions between dealers.

Nibble on the snappy baby arugula salad ($7.50) with shaved Parmesan and roasted corn while you wait for pizza. The other bowl of greens - baby spinach with glazed pecans, bacon, and goat cheese ($8) - is heartier, but nicely sweet and salty.

San Marzano tomato sauce covers the Margarita pizza ($10.95) with mozzarella and a dusting of Parmesan. This is a beautiful, perfect pie, and you could stop right there and have dined well, but what would be the point?

Paradigm ($14.95) might seem like overload, with its tomato sauce, sausage, pepperoni, meatball, bacon, and mozzarella topping, but the meaty ingredients are added in tiny amounts, so you get them all, but you can still waddle off your stool. The pie is named for the restaurant’s plumber, who loves this combo. Maximilian ($14.95) is sweet with roasted eggplant, salsa, and mozzarella, topped with arugula and balsamic vinegar (Max named that one for himself). L’Enza ($14.95), with tomato sauce, sausage, mushrooms, and mozzarella, is named for the owners’ childhood friend, Enza Sambataro, formerly known as Mrs. Kevin Youkilis.

Chicken wings ($9) emerge from the oven moist and saturated with their flavors. In the case of lemon-rosemary, that means a deep herb flavor and a large spoonful of caramelized onions, very dark with crisp edges and fine shreds of lemon rind. Honey hot habanero are pleasantly spicy, without the harsh aftertaste you often get with hot wings because these are softened with wildflower honey and roasted peppers.

It’s unusual that a 2-month-old spot can feel like it’s already a neighborhood fixture, but Max and Leo’s does.