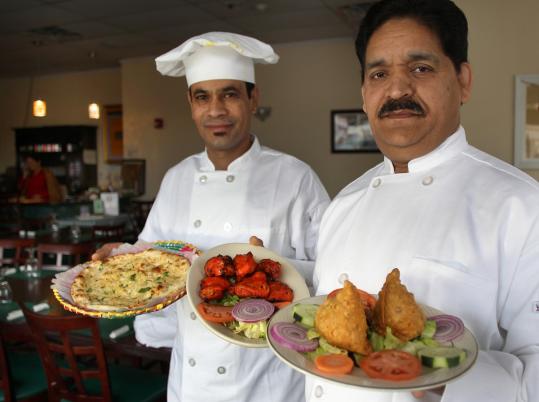 After years of taking trips to New York to find Halal dishes for family gatherings, Pakistani-born Irfan Khalid decided he could fill the niche here. Darbar is the result, with Khalid in the kitchen, his brother Gulfam Mian, who owned the former cafe Habibi in Brighton, running the front of the house, and Khalid’s wife, Rani, a native of India, answering phones, clearing tables, and doing whatever else keeps the restaurant running smoothly. Pralad Basnet, from Nepal, is the sous chef. Darbar, says Khalid, might be the first stop for South Asian techies in town looking for a taste of home.

Darbar isn’t the kind of restaurant you just happen upon. It’s tucked away in a rather unappealing corner of Brighton far enough from the lively BU college bars and pizza spots so it doesn’t receive much student foot traffic. Which is a shame, because the comforting Pakistani and Indian fare at this family restaurant is perfect for any adventurous diner on a budget.

Magaz masala ($10.99), otherwise known as lamb brains, is a specialty. The idea of eating brains may be a bit alarming to the timid diner, but the deeply rich, savory flavor is delicious on fluffy basmati rice ($3.99). Another favorite is kahari gosht ($12.99), braised goat shanks with barely a trace of gaminess, thanks to several days in a marinade of yogurt, ginger, and a long list of aromatics. We taste coriander, cardamom, and cumin, but Khalid will reveal only that “it has all the spices.’’ This treatment leaves the goat so tender and flavorful it could easily be mistaken for lamb.

Another favorite is nihari, a traditional Pakistani dish of braised beef with chilies, garlic, ginger, and more of those undisclosed spices. It’s quite oily, but the spoon-tender chunks of spicy meat are delicious wrapped in blistered, buttery naan ($2.99).

Those looking for more traditional fare will be happy with vegetable and meat samosas, ($1.50 and $3.99), delectable little pastry pockets that pack a savory punch. Seekh kebab ($2.50), a skewer of ground chicken with bits of red and green pepper, ginger, and cilantro, is flavorful, with a noticeable hit of cardamom, but a little dry. It’s served with raita, the thin yogurt sauce made with shredded carrot and cucumber.

Palak paneer ($10.99) has cilantro, spinach, and other greens and is lighter than creamier versions at other Indian restaurants. It has a generous amount of paneer cheese but could use more salt. Chicken tikka ($9.95) arrives succulent and spicy. The boneless thighs are slightly charred on the outside, juicy inside, with lots of good ginger and garlic flavor. Aloo mutter ($9.99) is another winner, with large pieces of potato and peas in a garlicky sauce.

The owners are eager to introduce new customers to their cooking. I overhear Khalid suggest dishes to an enthusiastic young student picking up a large order, who is back for the second day in a row. The young man tells Khalid which dishes he likes best and asks him to go easy on the chilies as Khalid heads back to the kitchen.

Perhaps the third time will be the charm, and the student’s friends will come too.

Catherine Smart can be reached at cathjsmart@gmail.com.