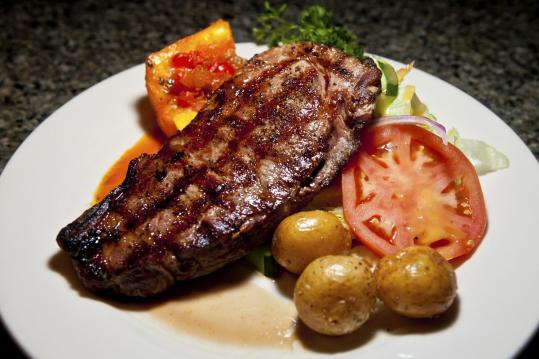 Grilled beef Argentinean is a favorite entree at El Paisa, where chef-owner Juan Carlos Tabares cooks up a storm, including a very popular brunch. The menu inside the East Boston restaurant reflects the ethnic mix outside. (PHOTOS BY ARAM BOGHOSIAN FOR THE BOSTON GLOBE)
By Glenn Yoder Globe Staff / October 5, 2011

If there is indeed wisdom in the masses, then the disparity between the dinner and brunch crowds says everything about El Paisa Restaurante in East Boston. Dinner brings a quiet atmosphere; brunch is a madhouse - and quite worthy of it.

At 8 p.m. on a Friday, the eatery, on a high-traffic street corner directly across from the Orient Heights Blue Line T stop, is perhaps half-filled. The space is inviting, with an elegant design and comfortable seating. True to East Boston’s mixed heritage, the menu offers a blend of Colombian and Italian cuisine, sometimes within the same dish.

Creamy guacamole is stunning and thankfully tops both the fried plantains and the nachos, which are also heaped with cheddar cheese, pico de gallo, and sour cream. The chili soup steals the show, with a sweet taste complemented by Monterey Jack cheese and corn tortilla chips.

Unfortunately, most of the entrees don’t live up to the expectations set by the appetizers.

Tequila lime chicken ($13.99) consists of three pieces of very tough poultry that are difficult to cut atop linguine swimming in a watery sauce. Sea bass ($17.99) may be the most visually appealing dish, but it has an odd consistency that causes the food to fall apart when cut with a fork. Seafood paella ($15.99), which includes shrimp, mussels, clams, calamari, lobster, and more, is topped with a disappointingly bland yellow sauce.

With the exception of the slight sea bass, all the portions are huge. Pasta nearly overflows from the tequila-lime chicken dish, while the grilled beef Argentinean ($14.99) is a massive cut of lean red meat, with a juicy interior and savory chimichurri sauce. There’s little chance you will leave the table hungry, though you could be satisfied with appetizers only.

To get in on a Sunday morning, we stand outside for more than 25 minutes, admiring the small empire El Paisa has developed since it opened almost five years ago, a group that includes a pizza shop on the back side of the restaurant, and a butcher shop across Breed Street.

When we get in, we are shepherded to the line by owner Juan Carlos Tabares. At the end of the all-you-can-eat buffet ($11 for adults; $5 for children), giant bowls of fruit - including kiwi and mango slices, papaya, and blackberries - await us. Cereal, muffins, and pastries are nearby. Steaming trays offer choices such as potatoes with onion, eggs Benedict, rice and beans, and sausage.

But the buffet’s prize is a chef making custom omelets with mushrooms, tomatoes, chives, jalapenos, and cheese. He also cooks eggs, waffles, and pancakes to order, along with what Tabares calls “Colombian cheese bowls.’’ The omelets are perfectly cooked, and the jalapenos are flavorful without adding overpowering heat. The sausage, which we enjoyed in the seafood paella, is again quite good. Rice and beans are somewhat wet, but retain good flavor. Dark-roast coffee is excellent black, just as you would expect from a Colombian restaurant.

As we exit, the line has swelled even longer, and the church crowd has not yet arrived. The secret’s out in Orient Heights.

Glenn Yoder can be reached at gyoder@globe.com.