From Santos, a high-pitched, hyper menu 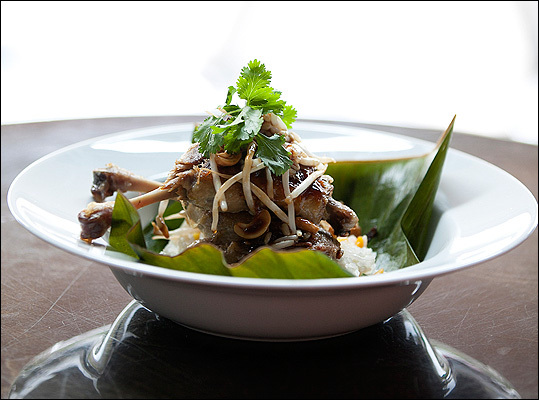 There is a mad, blue-haired scientist in the kitchen. He’s crazy for foam. He dehydrates honey. He makes little gelatinous pearls that are flavored like blueberry, and milkshakes that combine the tastes of butterscotch and truffles. He freezes these shakes with liquid nitrogen. He serves hot sauce in pipettes.

Jason Santos is chef-owner of the new Blue Inc., in the former Lobby space on the Greenway. He gained respect locally as chef at Somerville’s just-closed on the Square. He gained recognition nationally as a contestant on Fox cooking competition “Hell’s Kitchen,’’ in which he placed second. At Gargoyles, his quirky dishes nudged the envelope. At Blue Inc., this approach is amped up. The menu is high-pitched and hyper, half cooking, half cartwheels. It portrays him as a wild and crazy guy. (And the restaurant’s name ensures he’ll be dyeing his hair blue forever.)

The Financial District is an interesting choice of location, without the visibility of Back Bay or the South End. One might have expected something more high-profile from a chef returned from the land of television. The restaurant features blue paint and blue accents, with (why?) a large picture of Twiggy’s face adorned with undulating blue patterns. Every surface is hard, and the small room is almost unbearably loud. Servers are generally a pleasure to interact with, even when neither of you can hear a word the other is saying.

Blue Inc.’s dinner menu is a 12-dish affair, six appetizers and six main courses, so succinct the kitchen ought to nail every one. It doesn’t.

It has moments. Pork belly is luscious, a fatty, rich, and tender block of meat, crisp on top. It’s the kind of thing that has you licking your lips even after it’s gone. It’s a pretty presentation, served over rectangles of honeydew melon on a plate sprinkled with pink peppercorns. If the melon were ripe, this would be a sexy dish. Instead, it tastes like it grew on a vine nourished by the fluorescent glow of supermarket lights.

Calamari “spaghetti’’ is a version of a dish Santos served at Gargoyles. Thin-cut squid is as silken as handmade pasta. It’s served with tomato sauce that contains meat, boldly flavored, strangely familiar. When your tongue places the taste as pastrami, you almost laugh out loud. Over the sauce is salt cod espuma (a.k.a. foam), and the bowl’s wide rim is smeared with garlic bread puree (it looks like miso but doesn’t taste like much) and garnished with blue-black squid chips, a twist on Asian shrimp chips.

Another Santos signature is duck confit glazed with honey and hoisin, served in a banana leaf with sticky rice, mango, and cashews, the equivalent of a Thai dessert. Flavored with coconut milk, on some nights this dish is simply too sweet. On others, there’s more balance, and the sweetness works well with the rich confit.

But lobster and summer truffle soup is a cacophony of flavors - porcini, favas, cauliflower espuma, bee pollen - that tastes like confusion with sugar on top. It, too, is overly sweet. Further discord is sown in a dish of fried chicken, each component of which is perfectly acceptable, even delicious, on its own. The chicken has a thick, crunchy, satisfying crust that evokes fast food in a not-at-all-bad way. Most mysteriously, however, it is topped with guacamole and a tortilla chip. And beneath the chicken is garlicky sauteed spinach; under that is celery root puree. Also on the plate: a drizzle of barbecue sauce. Everything in this dish is at odds with everything else.

It’s better than a dull dish of salmon. The grilled fish is a bit dry, surrounded on the plate by several shrimp and a pool of green garlic-tiger shrimp butter, which simply tastes very garlicky. Also on the plate are parsnip puree and a horde of hoary peas, big, starchy, and flavorless.

For dessert, Blue Inc.’s signature gooey butterscotch fondant is served with truffle ice cream. The candied sweetness and the earthy funk are a strange and intriguing combination. Even if you don’t like it, you won’t be sorry you tried it. On the other hand, chocolate cake tastes very . It comes with good avocado sorbet, which mimics the appeal of Vietnamese avocado shakes.

Cocktails are experimental and often terrible. One called Study Au Broad is made with Old Tom gin, flash-frozen vermouth “dippin’ dots,’’ and Campari foam. It’s an affront to the right honorable Negroni, which (a) has dignity and (b) can actually make you drunk, unlike the Study Au Broad, which starts off steaming like a sulfur pit, then settles down into a salmon pink sludge. A better choice is the Fat Boyz Margarita, made with candied grilled jalapenos, beef stock, and smoked chili salt for extra umami and depth. “On the rox or up in your face!,’’ says the menu.

Why so in your face? When Blue Inc. steps back a bit from the attitude and the smoke and gimmicks, it’s on much surer footing. With bar snacks such as lobster tacos with mango salsa and mini Kobe corn dogs in an appealing, crunchy shell; with a good pulled pork sandwich and a burger topped with tomato jam, basil, and blue cheese for lunch; with focused late-night offerings on weekends (pizza and beer in September, tacos and margaritas in October, Chinese food and scorpion bowls in November), the restaurant offers food that is playful, tasty, and not trying so very hard to impress. Chemistry is a garnish, not the main course.

The real-life business of operating a restaurant has little in common with reality shows. The best way to continue being a celebrity is to serve guests incredible food. Santos proved himself a serious chef at Gargoyles. He just needs to settle back into that role.