Red Lantern adds spice to night life in the Back Bay 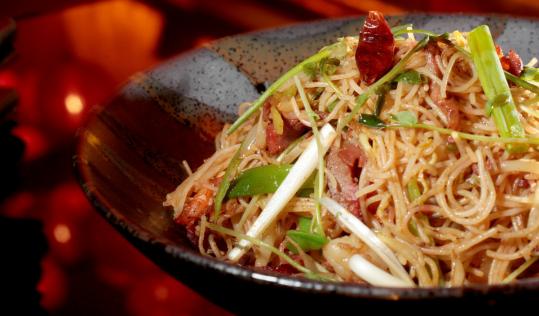 The first time I visited Red Lantern, I ate a lot of things. Including my words.

I had an open mind. Parent company Big Night Entertainment Group said the 9,000-square-foot Back Bay establishment would be a restaurant with night life, rather than a nightclub with food. Some of the owners are also behind Hingham restaurants Tosca and Caffe Tosca. But I have been less than impressed with meals at Shrine, a similar concept run by Big Night at the at Foxwoods. The Estate, Scorpion Bar, High Rollers - these sister establishments are for people who want to go out, but not to dinner.

Then there’s this axiom: The more Buddha statues there are per square foot, the less focused a restaurant’s food tends to be. Red Lantern has many Buddha statues, in addition to an armada of lanterns, terra cotta warriors, and perky-bosomed clay acupuncture models repurposed as floor lamps.

Yet the first time I visited Red Lantern, I ate a lot of things. And they were great.

There were the duck buns, shreds of tender meat tinged with hoisin and laced with slices of fresh chili, sandwiched between two puffy, lightly sweet bao-style buns.

Lobster rangoons, not a dish I gravitate to, won me over - fresh, expertly fried, the filling tasting of actual lobster rather than the usual seafood-flavored cream cheese.

Hot and sour soup was balanced, not gloppy with cornstarch, the heady aromas of pork broth and white pepper wafting from the bowl. A friend whose family runs a Chinese restaurant uses this dish as a measure of worth, in the same way some judge a chef by the roast chicken. If I had let her, she would have eaten the whole bowl.

The Singapore street noodles were grease-free, lightly flavored with curry, tossed with plenty of shrimp and pork.

And the highlight was a whole striped bass, wok fried with sesame, soy, ginger, and scallion. We descended with chopsticks and picked its bones clean, while slurping up a candy-sweet scorpion bowl. This was a happy night, made happier by attentive service and solicitous treatment from a manager making the rounds. Red Lantern had just opened. I looked forward to going back.

You can’t go back. On subsequent visits, I saw glimpses of that initial greatness, but never the full potential.

Chicken is stir-fried in a sticky sauce with chilies and vegetables. It’s served with lettuce in which to wrap the filling. The dish is fun to share, even if the sauce could use more layers of flavor. Red Lantern’s take on beef and broccoli adds in a few asparagus stalks. It tastes no better or worse than the version you might get at your neighborhood takeaway, but it costs $24.

Several dishes are overwhelmingly greasy. Chow fun noodles with pork are clumped together and slicked in fat. The bland dish desperately needs seasoning - garlic, ginger, chili, salt, anything. Broken lobster sounds wonderful - a whole stir-fried lobster, cracked so it’s easy to get at the meat. It, too, would benefit from seasoning, although the vegetables it’s served over offer a nice hit of ginger, and house-made XO sauce on the side lends umami. Regardless, the lobster meat is ruined, permeated with cooking oil.

A notch better is a whole roast duck, enough to serve four people. It has skin so crisp it shatters between your teeth, and it’s nicely flavored with ginger, rice wine, and five-spice powder. But it’s cold when it gets to the table, and the meat is dry. Also, it’s $88.

Cooked dishes make up one half of the menu, sushi the other. In addition to traditional maki and nigiri, Red Lantern offers sashimi plates and more elaborate rolls. One called Geisha Nights combines hamachi, plum, and chili in a bubble gum pink soy wrap, like sushi gone to a bridal shower. The flavors work well together. Another, the Smoking Lantern, looks even more dramatic but is less successful on the palate. It arrives at the table under a dome filled with smoke, which curls into the air when the server lifts it. The roll itself includes salmon, yuzu gel, pickled burdock root, and wasabi micro-greens, but the smoke flavor overrides them all.

Where there’s smoke, there are flaming plum shots, plum liqueur and fruit brandy set on fire. These are sweet like the scorpion bowls, and the Singapore Sling, and the Shanghai Street Sangria, and the drink that looks like bubble tea but is spiked with green tea vodka. A list of about 10 kinds of sake is a departure from the sugar, as is a riff on a Bloody Mary incorporating wasabi, which our server won’t let us order. It’s too spicy, he says. “Now if you’re looking for something dessert-y. . .’’ he says. We’re not.

Until it’s time for dessert. Lantern cake combines dark chocolate with butter almond gelato and a swirl of wasabi mousse that plays surprisingly well with the cocoa. Tempura bananas stacked like get a welcome kiss of salt from the sweet soy sauce kecap manis.

Even when the food doesn’t rise to the occasion, Red Lantern can still be a good time. A former Bertucci’s, it looks stylish, with exposed steel beams, brick walls, massive windows and doors, and red accents. In the open kitchen, chefs grill, stir-fry, and make sushi beneath a large, gold-leafed hood that mimics the shape of a folding lantern. Young women and older men flirt as lithe staffers in revealing black corsets deliver cocktails. The restaurant also draws businessmen, a woman with a baby, a group of Chinese senior citizens, a TV personality from Philadelphia, and the blond college girls who recognize her. All on the same night. Lettuce wraps, terra cotta warriors, broad appeal, and racy undergarments: Red Lantern is an R-rated version of P.F. Chang’s.