Get a plateful, and an earful, in Brookline 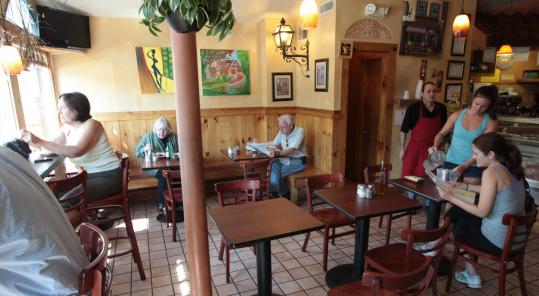 Three years ago when I moved to Boston, I hoped there would be a homespun restaurant like Bottega di Capri on every corner. Why not? There are plenty of Italian-Americans here, and New Englanders are, at least by reputation, a frugal lot. You’d expect a demand for good workaday Italian pasta plates - at workaday prices - in every neighborhood.

The grandly named Bottega di Capri (the “boutique of Capri’’) close to the Brookline Village T stop, claims to be the best hidden secret outside of the glamorous Italian resort of Capri. Instead of waiters, the 18-seat restaurant has Iván Conill, a young emcee of sorts at the counter. Conill, 21, is an affable Argentine of Italian descent who now hails from Newton and bears more than a passing resemblance to comedian Jonah Hill. He has plenty of unrestrained advice for everyone - especially the regulars - on life, sports, politics, and, at length, the dishes on the menu.

Bottega is owned by Carlos and Gustavo Pérez, who came to Boston from Colombia in the late 1990s with no previous culinary experience. Here the brothers found work, and learned Italian cooking from the previous Tuscan owner. They bought the restaurant in 2008 after 10 years of apprenticeship, keeping the same suppliers, menu, and, as regulars can attest, standards of quality.

Pesto Rosa is an early Pérez creation designed to suit the tastes of the many Arab customers in the neighborhood. Spicy arrabiata sauce is made with basil, garlic, and other spices, then fortified with a bit of cream. It’s much lighter than you might expect, and a delight, I thought, even with delicate imported tortellini ($7.95). These are filled with pumpkin (“zucca’’), which in Italy are blotchy, malformed green-orange vegetables whose savory taste puts our sweet sugar pumpkins to shame.

Conill tried to dissuade me from ordering pesto Rosa sauce on the tortellini. “Oh please. Get that sauce on penne or something. The pumpkin tortellini are best with butter and sage.’’ When I can’t find this dish on the menu, Conill throws up his hands. “We don’t need to put it on the menu. Everyone already knows to order it that way.’’ If he weren’t smiling so broadly, you might think he’s upset.

To make the dish, whole sage leaves are fried almost crisp in “three squares’’ of salted butter, the cooked tortellini enter the hot pan for a quick stir, and the contents are promptly plated. “It’s simple - and perfect,’’ says Carlos Pérez. The dish is as aromatic as it sounds. The herb adds a bit of finesse to the firm, buttery pasta, and elevates the pumpkin’s flavor.

Bottega di Capri offers 21 sauces with any of eight pastas. Math like that usually adds up to not-very-good. But it works: from amatriciana (pancetta in spicy tomato sauce, $6.50) to vongole (red or white clam sauce, $6.50).

The basics here are solid - good red sauce, good technique, and quick plating. These strengths serve Bottega well as a foundation for the most successful dishes (there are many). Yes, on occasion the kitchen uses tomatoes that are canned, gnocchi that are packaged, peas that are frozen (here they have to; fresh ones aren’t in season).

The chefs make none of the pastas in-house, but all of the sauces. And the prices are unbeatable. Fine Italian staples (prosciutto, olive oil, pignoli, pastas, Parmesan and gorgonzola cheeses) keep quality good and consistent. And the policy of preferring fresh ingredients, or skillfully using packaged substitutes, will hold up all winter.

After their Tuscan tutelage, the brothers took other liberties with tradition. They now add chicken ($2.50) or shrimp ($3.95) to any of the pastas on request. Italian purists may scoff, but Americans want protein on the plate.

Of course, add them at your own risk. You’ll need to convince the man at the counter that it’s a good idea.

May we suggest pumpkin tortellini with butter and sage, penne amatriciana, ravioli with pesto Rosa.