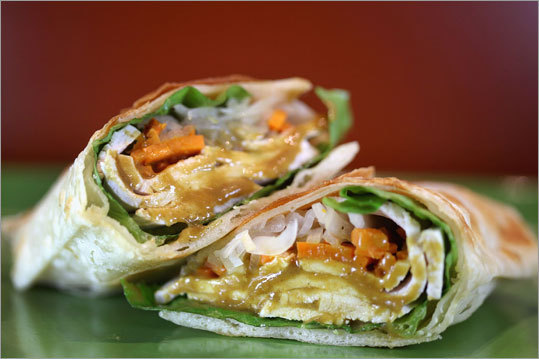 Foumami calls itself an “Asian sandwich bar’’ so I was expecting new fusion flavors. But when I bit into the braised beef brisket sandwich ($7.95), I was transported back to my childhood. In California, my family would drive for an hour almost every Sunday so we could have a traditional Chinese brunch of savory soy milk, fried crullers, rice cakes, and a hard, flaky flatbread, shaobing, which was layered with beef.

All Foumami sandwiches riff off this basic idea of Asian foodstuffs wedged into shaobing, and the results are at times brilliant. In the traditional beef version, hoisin sauce, cilantro, and thinly sliced braised beef shank are folded into the flatbread. Foumami’s shaobing is softer and less flaky, and the beef shank is replaced with brisket. But you can taste where it came from.

Grilled rib-eye steak sandwich ($7.95), which is Korean kalbi wrapped in lettuce in shaobing, is a delicious way to enjoy quick Korean barbecue. Curry chicken sandwich ($7.35) sounds potentially messy, but this pliable shaobing has a supernatural ability to hold sauce in a sandwich. Beat that, sliced bread.

Owner Michael Wang, 40, a graduate of Harvard Business School, is still tinkering with the menu. He sees this Financial District location as the first of many. (Restaurant chains are in his blood: His grandfather founded a chain of dumpling restaurants in China that his family operated for 50 years, before selling it in 2000.)

The restaurant has some cool touches, from hip white chairs that look like steel origami to the giant Chinese characters “fo tiao quang’’ written in ancient script on the wall. The words are a Chinese saying that refers to a story about a meal that smelled so tasty it enticed a Buddhist monk to jump over a wall to try it. Wang took the first word and paired it with “umami,’’ Japanese for delicious, to say, “If you come to Foumami, you’ll experience firsthand why Buddha jumped over the wall.’’

Also in the Financial District, Casa Razdora seeks to evoke an Italian childhood experience. This small, mostly takeout location has two tables and a bar. “We want you to feel the way you did when your mother made pasta for you,’’ says co-owner Denise Santini, 40. She runs it with her husband, Giancarlo Baldini, 41, a native Italian, and her cousin Robert Santini, 48. Razdora is from the dialect of Emilia-Romagna, the region Denise’s mother came from. It means matriarch or, as Santini says, the sort of grandmother “who makes homemade pasta and bread every morning.’’

Almost everything is made here, from the lasagna sheets to the Bolognese sauce. Cream dishes tend to be extra creamy, cheese dishes extremely cheesy. Sandwiches come with a generous helping of every ingredient. At times, this is overpowering.

Specials might include Thursday’s rosette ($7.95), baked pasta sheets rolled with prosciutto and cheese in a cream sauce, or Monday’s arista alla birra ($9.25), pork braised with beer, butter, and onion.

Mama would be proud.