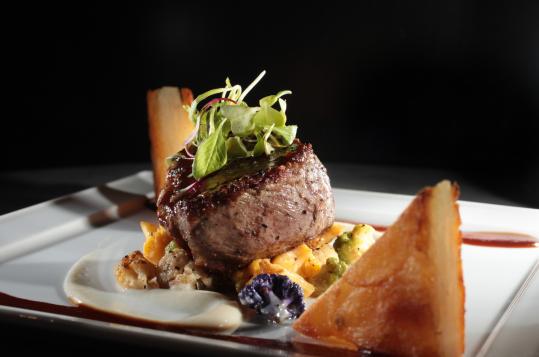 49 Social is two restaurants in one. Opened in late May, the Downtown Crossing establishment is a reverse mullet: party in the front, business in the back.

Entering, one finds oneself in the bar and lounge, lively with after-work drinkers and friends sharing flatbreads and fries. Kim Frankson, formerly behind the bar at Radius, mixes fine drinks such as the tart and warming Sugar & Spice, which combines tequila, kumquats, and Japanese chili powder. Mellow adult contemporary plays perpetually in the background, as though someone has programmed a Pandora station based solely on the music of Jack Johnson.

Then there’s the rear, a dining area that is subdued and often underpopulated. Staffers brush past tables with tubs of dishes. Service is more formal, even as waiters forget to explain how the lamb, described as “chef’s seasonal offering’’ on the menu, is prepared that day, or that cod will be playing the role of halibut in a fish dish. They do remember to stop by during the meal to ask how everything is, smiling awkwardly.

The bar area offers a better experience, but the dining room menu yields more polished results. Fortunately, guests can order from the latter while seated in the former. Executive chef Michael Lishchynsky (Four Seasons, New York’s David Burke Townhouse) brings creative twists to both menus, playing with flavors and presentations and bringing in occasional techniques from the molecular-gastronomy playbook.

The bar menu sounds enticing, with descriptions that can make your mouth water. Who can resist fried oyster po’boy sliders, calamari with Thai red curry sauce, or a carbonara flatbread topped with pancetta and fried egg?

But the oyster sliders come on past-its-prime baguette, which would be too chewy and thick for the tender contents even if fresh. One can’t taste the oysters, just the celery root slaw, lettuce, tomato, and Old Bay aioli.

Augmented with kumquats and pickled jalapenos, red curry sauce is a genius accompaniment for fried squid, the flavors of Southeast Asia enlivening the dish. Yet the breading on the calamari is sodden rather than crisp, falling off the squid in clumps.

The carbonara flatbread is better, a rich pleasure. It arrives with bright yellow yolks wobbling on top, then becomes a runny delight when cut. It’s a pizza that tastes like a croque-madame.

Tuna sashimi, which appears on both menus, features raw fish somewhat wan in flavor, but plenty of it. It’s a beautiful presentation, the tuna accompanied by radishes and soy “pearls,’’ tiny, salty brown spheres that bring umami to the plate. Garlic chili vinaigrette adds spice, and the dish winds up flavorful after all.

It’s a segue into some of Lishchynsky’s more ambitious creations. The best of these is a first course called “duo of beef.’’ It features beef tartare, flavored like Korean barbecue, with ginger, soy, Asian pear, and more. The raw beef is topped with a quail egg. The other preparation is tea-smoked beef, which arrives under a rocks glass; a server lifts it and the smoke wafts out. The meat tastes a touch too smoky. It’s campfire-esque. But the little magic trick is good fun.

Seared scallops are served on a bed of mercurochrome-colored curried lentils. The presentation is arresting, but the lentils are underdone. Another dish that looks great is a pork roulade, tenderloin rolled around wild boar sausage. It needs salt, and the under-seasoned bacon and pea risotto it’s served with seems more like plain rice. There’s none of the creaminess one wants from risotto.

When the menu plays it a bit simpler, the results are excellent. Another “duo,’’ this time a main dish of chicken, combines soul food and classic technique. Confit leg and thigh are served with a crisp breast, the white meat unusually even juicier than the dark. Tender collard greens are on the side, along with a creamy macaroni and cheese laced with slices of truffle, not the ubiquitous truffle oil. It’s dynamite.

Dessert brings options such as red velvet cake with goat cheese cheesecake, Nutella creme brulee, and strawberry shortcake with pink peppercorn ice cream. One can also order a trio of mini versions. The red velvet cake has the texture of dry sponge, but the Nutella creme brulee is a little dish of happiness, the custard and the hazelnut paste an unexpectedly satisfying combination.

It can take a long time for food to arrive at the table. Frankson’s cocktails offer distraction while guests wait. As well as the Sugar & Spice, tequila appears in a drink called the Pink Lady, matched with rhubarb-lavender syrup and lime. The flavors are brilliant, although the cocktail itself could be a few degrees colder. The wine list offers an extensive selection of food-friendly, often wallet-friendly bottles, many of which diners will be familiar with from other wine lists around town. (There’s also a pricey reserve list for those looking to impress.) On tap are Allagash White, Dogfish Head IPA, and Stella Artois, as well as the 49 Social house pour - currently Pretty Things Jack D’Or, becoming so dominant locally I’m going to start calling it Boston Budweiser. Bottle selections include Estrella Damm Inedit, a witbier that superstar chef Ferran Adria had a hand in creating.

49 Social occupies the space that was formerly Ivy. Small and attractive, it looks much the same as ever: brick walls, wrought iron railings, marble bar, and a balcony. As a midrange place appropriate for after-work gatherings or business lunches or dinners, it fills two niches for Downtown Crossing. But with so much of the action taking place by the bar, it sometimes feels like 24 1/2 Social.