THIS STORY HAS BEEN FORMATTED FOR EASY PRINTING
Cover story

Music to prep by 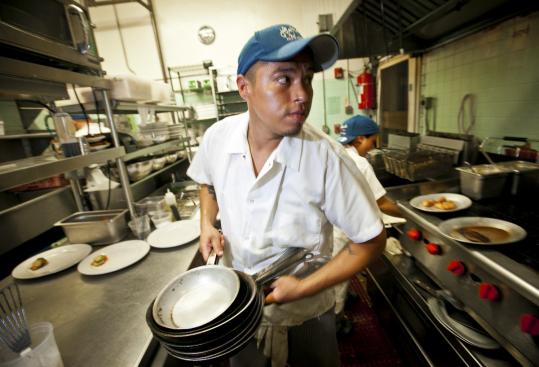 Name that job: A person who works late hours, collaborating with a tight-knit group, performing night after night. Afterward, beer may follow.

Maybe you said rock star. Maybe you said chef. The parallels between cooking and music are many, and the two worlds often overlap.

“I used to play music back in my younger days,’’ says Mark Romano, chef of Highland Kitchen in Somerville, who played drums (and occasionally accordion) in a ’90s band called the Lune. “The restaurant business is a lot of musicians and ex-musicians.’’

Or, as Chris Thompson of Winthrop’s Blackstrap BBQ, puts it, “It’s a bunch of dirty cooks with tattoos who like beer and music.’’

As much as there’s spiritual kinship, the connection also makes practical sense. Restaurant work can offer flexible hours, allowing musicians to adjust schedules or take time off for gigs. And it provides artistic types a more-reliable income without their having to join the corporate world.

“You can’t pay the bills playing music unless you’re in a cover band or have a hit record,’’ Romano says. “A lot of artistic people are drawn to cooking. It’s a job, it’s a craft, but you can let your creative side come out while working, as opposed to a 9 to 5 job in a cubicle.’’

Laura Henry-Zoubir agrees. The culinary director of restaurant group Dramshop Hospitality (Church, the Regal Beagle, Rye Tavern, Union Fish), she says, “Chefs are very creative and artistic, as are musicians. A lot of our staff in their spare time are musicians. The restaurant industry correlates with the music industry. We share a lot of similarities for passion and creativity and being able to express ourselves through what we do.’’

It’s natural, then, that music would be a big part of kitchen life. Hours of chopping, slicing, and peeling require a soundtrack, as any home cook knows.

“I don’t think I’ve ever worked in a kitchen that didn’t have some form of music in it,’’ says Colin Lynch, executive chef of Barbara Lynch Gruppo, which comprises restaurants such as Menton and No. 9 Park. “The whole energy of the kitchen changes. The speed at which people work changes depending what we listen to. During prep, you zone out. You’re doing one thing for 45 minutes straight. It helps you keep that rhythm.’’

No matter how elegant the food at a restaurant, the music that plays as it’s prepared is likely to be less refined. No one is listening to Vivaldi as he buffs baby vegetables and dismembers ducks.

At Menton and No. 9 Park, the soundtrack might include anything from hip-hop to Katy Perry to oldies, Lynch says. “Every once in a while at No. 9, we’d put on Magic 106.7. Everybody would be like, ‘We don’t want to listen to this,’ and a half-hour in, everyone was singing along.’’ During service, however, the music gets turned off, he says. People need to focus.

Music can help motivate a kitchen crew, says Brian Poe, chef at Poe’s Kitchen at the Rattlesnake. “Sometimes I ask them to turn it up,’’ he says. “When we’re in the weeds, somewhere along the way AC/DC comes on and everybody gets real quiet and cooks through it. It’s one of those things where the whole line is like, we’re doing business, this is good. We’ve all had an AC/DC moment in life, [forget] it, we’re gonna rock out and do this thing.’’

And, of course, it can make things more fun. Poe recently walked into the kitchen to find his crew making guacamole and singing along to Twisted Sister’s “I Wanna Rock’’ (incidentally, from the album “Stay Hungry’’). They had changed the lyrics to “I wanna guac.’’

Different tunes lend themselves to different tasks and times. “Certain songs build morale and get people excited,’’ Poe says. “Others say, ‘He’s dead serious. Get out of the way.’ I’ll put on ska-punk for knocking down the prep list. We’ve put the ‘Rocky’ soundtrack on going in for a big run just to be goofy. With the menu, hands down it’s Stan Getz, ‘Girl From Ipanema.’ I can take that and a glass of wine and a yellow legal pad and write a whole menu down. It blocks out the white noise.’’

Henry-Zoubir says the staff at Union Fish in Plymouth is particularly devoted to music, and what they choose to play evolves as it gets later. “They start out with old classic rock, really mellow, and get more intense throughout the day,’’ she says. “By the end of the day, they’re listening to head-banging music that’s just angry. No matter how busy they are, they find time to change up the music.’’

At La Morra in Brookline, the staff listens to music while prepping in the basement - anything from reggae to gangsta rap to Top 40. “We put it on right before service to get fired up,’’ says owner and executive chef Josh Ziskin, who favors songs he listened to in high school. “But not on the line. It can be distracting. One of the first chefs I worked with would say, ‘Enough talking and music, get to work!’ ’’ If the are playing, however, he makes an exception. Playoff games belong in the kitchen.

Rembs Layman is head chef at Tupelo in Cambridge, which shares its name with Elvis Presley’s Mississippi birthplace. This association plays out musically, if not as often as you might expect. “At nighttime we have playlists - a lot of blues, we used to do a lot of Southern music, Johnny Cash, Elvis,’’ Layman says. “When I’m by myself prepping, I listen to ’ZLX, classic hits. I’ll listen to harder rock ’n’ roll or even metal when I’ve got a lot of work to do and need to keep moving quickly. There are times when I’ll listen to WJIB or classical music or something if I’m feeling more mellow.’’ (His crew also watches movies in the kitchen - “The Good, the Bad, and the Ugly,’’ “Predator,’’ and “Jaws’’ among them. “You’re dealing with guys, now,’’ he says.)

Highland Kitchen is known for having one of the best jukeboxes in town, along with live country and bluegrass during its Sunday brunch. The music that plays in the kitchen is as eclectic as that on the jukebox.

“The prep cooks are predominantly Central American. I know all the Top 40 Spanish songs by heart,’’ Romano says. When the kitchen is busy, it’s time for heavy metal or hip-hop. People bring their iPods, but the radio is frequently on. “We have such good college radio in this town. Saturday is [MIT station] WMBR day. Something a lot of restaurants listen to, and I’ve been doing so for years and years, is the show ‘Elvis Only’ on Sundays at 8 [a.m. on WODS]. Most Sunday brunch cooks know it. These things become a tradition.’’

Music may be a constant in restaurant kitchens, but playlists are as varied as the people who work there. “Everyone is so diverse in a kitchen,’’ Lynch says. “It’s people from all walks of life, and the kitchen is the one commonality. It’s the same with musicians. Whether it’s hip-hop or country, it’s the commonality of music that unites them.’’

With so many passionate music fans working side by side, you might expect disputes to arise. For the most part, chefs say, people tend to tolerate one another’s choices. She who arrives first often gets to select the music.

“Everybody is usually cool about it, but sometimes there’s consensus and everyone says, ‘What the [heck] are we listening to? This needs to change,’ ’’ Lynch says.

Then there are people like Blackstrap’s Thompson, who might go on a 24-hour Elvis binge, blast punk rock, or spend Sunday recuperating from Saturday with a steady stream of reggae. For him, it’s more than just background noise.

“I always wanted to buy my own restaurant so I could play my own music,’’ he says.