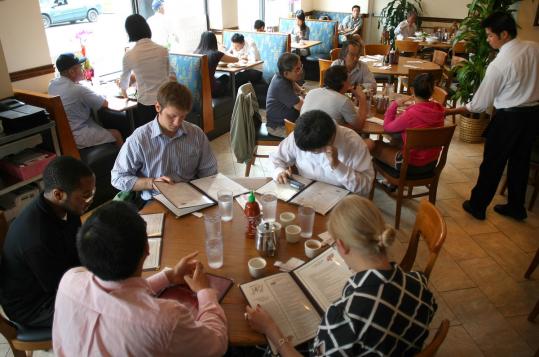 There’s a moment when it probably looks like we’re about to cover the table top with our pho (pronounced fuh). We’re struggling with the broth, beef, and a mass of rice noodles at the bottom of the bowl, trying to break them up and ladle the mixture into smaller bowls. Our waiter, who has told us his name is Edwin (this is the first Vietnamese restaurant where a server has introduced himself) rushes over. First he instructs us to put the garnishes in the bowl. In go bean sprouts and Thai basil. Then he deftly ladles in broth and noodles. Not a drop on the table. This is a traditional, hearty pho ($6.95, $7.50, $7.95) with very thinly sliced beef eye round that cooks in the heat of a fine, intense, clear broth.

Edwin also helps us shape bahn hoi, which are essentially roll-your-own fresh rolls. They begin with rice paper dipped into hot water, then filled with pieces of deliciously caramelized chicken, compact bundles of vermicelli noodles sprinkled with peanuts, shisho leaves, mint, Thai basil, carrot, and daikon. No dipping sauce. Edwin thinks it will be too pungent for us. Bring the dipping sauce! It’s just right with that unmistakable aroma of fish sauce, this one slightly sweetened.

Pho Le Vietnamese Cuisine is the latest venture of Duyen Le, who opened the Pho Pasteur chain, and changed the Brighton, Cambridge, and Chestnut Hill locations to Le’s Restaurant. The fourth, in Chinatown, is owned by someone else. At every table in this Vietnamese neighborhood you see large groups and lots of children. One night the room doesn’t fill until 8:30, when families pour in, many with babies in tow. The space was formerly occupied by Pho Hoa, before that establishment moved practically next door (Le had been the landlord).

The menu is large. Among the highlights are roast quail with a sticky barbecue quality on a bed of watercress with red peppers and onions; Vietnamese crepe ($8.95), a stunning yellow half-moon filled with shrimp, pork, and loads of sprouts; vermicelli with grilled shrimp ($7.95), shredded vegetables, and fish sauce; and roast duck salad on shredded cabbages with a sweet and hot dressing you can’t get enough of, and very crisp prawn crackers that you heap the salad onto.

A chicken pho with vegetables ($6.95, $7.50, $7.95) has a watery broth that doesn’t resemble its gutsier beef cousins. Stir-fried yellow noodles with broccoli, carrots, and red peppers ($7.95) is dull. Chinese broccoli with beef ($10.95) has chewy meat, though the broccoli is divine.

Catfish roasted in a clay pot, with caramel sauce ($12.95-$14.95), is placed in the center of the table. You use chopsticks to pull out pieces of the succulent fish and you’ll work hard to rid them of bones. This dish shows what the kitchen can do and what this clientele is looking for. If you’re having trouble, holler for Edwin.