Timeless yes, but time for a change

Locke-Ober is back, slightly updated with charm intact 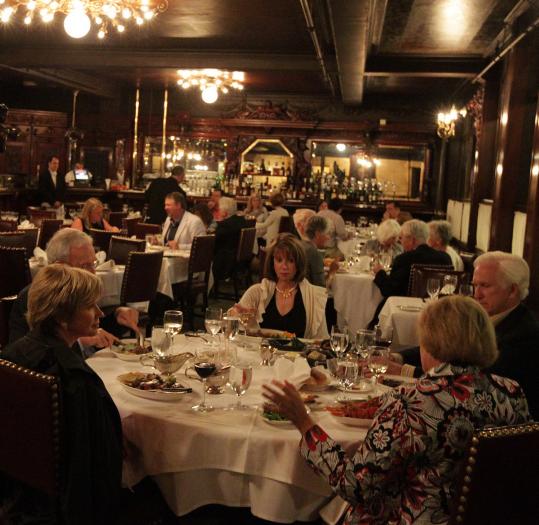 It’s Harvard reunion weekend, and at Locke-Ober there’s not a dry throat in the house. Bottles of wine arrive in droves at tables occupied by school chums, white-haired and still, indubitably, kicking.

The alumni demonstrate the inquisitiveness of intellectuals and the chattiness of inebriates. “And where did you learn your English?’’ one gentleman quizzes the Latina at the coat check. “Here,’’ she says, smiling gamely.

“How about you? Did you go to the university?’’ one guest inquires of another, younger stranger.

“Yes, yes I did,’’ the stranger answers. “Northeastern.’’

Downstairs in the loo, the ladies are wild. Their conversation could make an interloper blush. “I drank too much on the first date,’’ one woman recounts from the stall, encouraged to retell the tale of how she met her husband. The drink made her garrulous, she says. “And so I called him and said please give me one more chance. And he said OK, so I showed up at his door with no bra on and a freshly baked pie.’’ The ladies fall out laughing.

This crimson bathroom with Chinese characters crawling up the wall is one souvenir of the Lydia Shire Era, recently ended. A decade ago, the chef stepped in to reinvigorate the 1800s restaurant, a woman at the reins of an establishment where women weren’t generally welcome until the 1970s. Earlier this year, Locke-Ober Company owner David Ray and managing director Paul Licari closed the restaurant’s doors, renovated, and brought in chef de cuisine David Artiano, who worked previously at Locke-Ober. The restaurant reopened in April.

Locke-Ober, where JFK famously dined on the lobster stew that today bears his initials, has long been the place for power brokers’ power lunches and dinners. Who drinks martinis at noon anymore? Who even leaves the office for more than a quick sandwich? Locke-Ober stopped offering lunch, started again, stopped again. The economic downturn affected reservations and functions all over town. Times were changing. The restaurant needed to change, too, management decided.

But not too much. Else what would be the point? Locke-Ober is a dying breed, the place people go to be attended by their favorite waiter, to order the dishes they’ve always ordered. How the food is, well, that’s less important than the fact that it is at all. Each forkful is a tradition. It’s Boston’s version of Galatoire’s in New Orleans. It’s the best place in town to pretend you’re Don Draper or his date.

The menu has been lightened in spots. This means more vegetables and salads. Fat slices of ripe tomato and arugula are enhanced by a lavish spill of blue cheese dressing. An iceberg wedge comes with Green Goddess dressing and pork cracklings. Salads, yes, but hardly abstemious.

Entrees have been updated, too. There are fresh pappardelle served with scallops, cooked oysters, and frizzled leeks. The scallops are nicely seared, but the dish is bland. Soy-roasted duck is more interesting. A leg and slices of breast feature crisp skin. The breast could be a bit rosier, and there’s not much of the orange-tarragon miso flavor promised on the menu. But the duck is served with sauteed pea tendrils tinged with citrus, a delicious counterpoint to the fatty meat. Best yet is a thick piece of grilled swordfish, smoky and juicy, accompanied by pale green risotto. The grains have just the right amount of bite balanced by creaminess, and fava beans and sweet, tender shrimp are folded in.

But the classic dishes remain — along with the (empty) pulley-operated domed serving dishes along the mahogany bar, the suited waiters, and the oil portrait of a nude beauty named Yvonne. She is still draped under a cloth in mourning when Harvard loses to Yale. When history gives you JFK, you don’t do away with his lobster stew.

That long-lived dish is rich with cream, scented with sherry, and studded with chunks of meat. Some nights it has more lobster flavor; some nights it’s thicker or thinner. One night it’s a bit curdled. It’s never mind-blowing, but it’s reassuringly good, an old-fashioned taste from a time when a philandering politician might remain in office, no Twitter tripping him up.

Crab Louie salad is served in a cocktail glass, layered atop iceberg lettuce, with a hard-boiled egg peering out from underneath. It’s cool, light, and pleasant, but without much flavor or seasoning. Clams casino is an eternally satisfying dish, the shellfish topped with bread crumbs, diced red pepper, and bacon and broiled.

Locke-Ober offers an array of steaks, all natural corn-fed Western beef, the menu informs. The prime New York strip isn’t as flavorful as comparable steaks around town, and it arrives a bit more rare than requested. There’s an arsenal of accompaniments for the meat — five sauces, five butters, five potato dishes, a variety of sauteed mushrooms, grilled asparagus with hollandaise and creamed spinach and more.

One reason to order Dover sole meuniere is for the drama of watching your fish boned tableside. Licari says Locke-Ober presents it this way, but the night we order it, the fish is filleted by the time we see it. Slicked unappealingly with butter, it has already gone cool on the plate. It might as well be the scrod that’s on the menu for $16 less. Wiener schnitzel, however, is excellent. The breading is crisp, the veal tender, topped with a runny egg. Capers and anchovies lend punches of salty flavor. Fresh fettuccine are served on the side, coated simply in butter.

One signature dish, lobster Savannah, seems to have undergone minor renovations. Lobster sauteed in butter is still stuffed back into the creature’s body with a sauce of cream, sherry, mushrooms, and peppers. But the sauce is now applied more judiciously, allowing one to really taste the lobster. The dish is prepared with 2-pound lobsters and offered at market price. It’s perhaps worth inquiring what, exactly, market price might be. The night we order it, it’s $62, more than our bottle of wine, and in the running for the title of most expensive dish in town.

That wine is a pleasant surprise, a $40 Malbec recommended by the wine steward along with several more-expensive bottles. In a restaurant that still feels like an old boys’ club, he quickly grasps that the one woman at the table will be ordering the wine, and proceeds accordingly. This is more than can be said for many “modern’’ restaurants around town.

For dessert, old-school Indian pudding is a fine rendition, sweet and comforting. There is better baked Alaska elsewhere, but it is worth ordering here to watch your frozen dessert go momentarily up in flames, torched by your waiter and then delivered to your table. Locke-Ober’s macaroons are an addiction, crisp outsides encasing gooey innards fragrant with almond paste.

Perhaps the biggest sign of change at Locke-Ober is sartorial. The dress code is now dead — here and everywhere. Many diners still turn up in jackets or dresses. Some appear in more casual attire. One evening, a round table is populated by people in matching T-shirts, souvenirs of whatever event brings them to town. T-shirts! Someone, please, cover Yvonne for mourning. The whole idea of a special occasion restaurant, of formal dining, is to feel special and/or formal. When one can wear any old thing, half the reason for attending such a restaurant is gone. Locke-Ober is doing decent dinner business, even on the night of a big game. Lunch will start up again in October. But when the room is full of plainclothes diners, it can feel more like a tourist attraction than a relevant restaurant.

Still, things here run like clockwork. The service is strong. The dining room retains its fusty charm. The bar is gorgeous, one of Locke-Ober’s greatest assets, and highly underutilized at a time when classic cocktails have been revived. Management is missing an opportunity to gain a whole new, young audience. Strengthen the bartending, add some unapologetically retro snacks to the menu in the cafe, and watch people arrive. The Ward 8 cocktail was invented here more than 100 years ago, but I can get a better version at many other bars in town. (That said, a bartender at Locke-Ober made me one of the better sidecars I’ve had in a while.)

On three separate visits, I encounter mediocre food, good food, and excellent food. Your mileage may vary. Flavors don’t always pop for the modern palate; dishes are less heavily salted. Locke-Ober is a fly in amber, a wayback machine. You go here to eat, but you don’t go for the food. You go for Locke-Ober itself.