THIS STORY HAS BEEN FORMATTED FOR EASY PRINTING
THE TIP 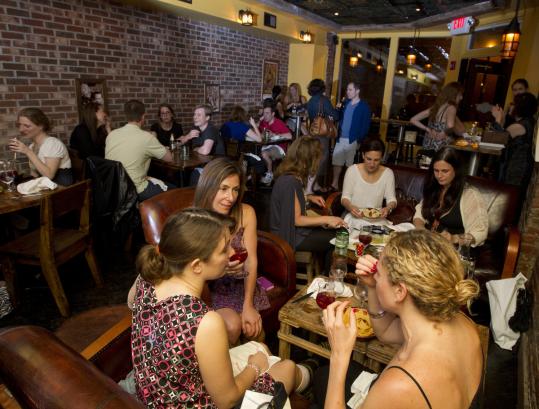 When Allan Rodriguez worked construction in the South End, he would buy lunch at Siraj Cafe. The general contractor grew up in Sonora, helping at his father’s restaurants. In Boston, he cooked for friends, threw parties, and dreamed up menus. Perhaps a return to the restaurant business was inevitable. Over salads at Siraj, a plan was hatched. Rodriguez wanted to open an authentic Mexican restaurant. He thought the cozy space would be perfect.

“We talked and came up with the vision, and here we are,’’ he says.

El Centro opened at the end of May, a small room with brick walls, bright yellow paint, and a pop art mural featuring singers and actors from Mexico — “people no one knows about,’’ says Rodriguez. “People ask, ‘Who is this guy?’ And I say, this is the background, this is the guy, this is his music.’’ It’s all part of his desire to acquaint Boston with his Mexico, not an Americanized idea of the country. “I didn’t want to advertise with Corona and Negra Modelo,’’ he says. “I’m taking a big risk with things people don’t know.’’

That means the menu features ingredients with which Americans may be less familiar, such as nopales (cactus) and huitlacoche (a fungus that grows on corn). At 6:30 a.m., the tortilla making begins. El Centro turns out 250 of them a day, using Rodriguez’s father’s recipe.

Rodriguez prepares dishes from all over Mexico, with a focus on Sonora, which is known for its beef. Offerings include chimichangas, arepas, charcoal-grilled beef spare ribs, tacos, and carne asada with refried beans, chili verde, and guacamole. The chef also makes his family’s specialty — churros. “We were in business making them for 25 years in Sonora,’’ he says. “I brought the recipe here.’’

Much of the decor comes from Mexico, too. He brought over curios, picture frames, lights, dishes, glasses, napkins — even the toilet and sink.

“I wanted to show people the real deal,’’ he says. That includes real Mexican hospitality. “This is your house. Stay as long as you want. If I’m mopping, come by and have a cup of coffee on the house. That’s how we act in Mexico. It’s business, but it’s way beyond that.’’