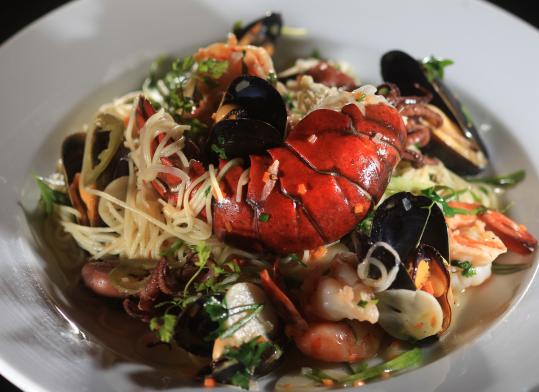 Local 149 opened in South Boston in March, declaring itself a “neighborhood joint.’’ That’s written right on the menu, literally and figuratively. There’s something here for everyone — pizza, hot dogs, and hamburgers alongside fried Brussels sprouts, lamb cassoulet, and salmon steak with sprouted lentil salad.

Of course, the hot dog costs $8. And the menu’s cutesy appropriation of workingman’s lingo indicates the target audience may not exactly be the workingman himself. Rather than appetizers, salads, sandwiches, and entrees, it offers “schematics,’’ “nuts & bolts,’’ “hand tools,’’ and “fabrications.’’ Not only is this plain silly, it’s confusing. Is the fish and chips — a schematic — a snack or a meal? How about the nut & bolt taco salad? And what makes prosciutto and duck liver mousse “permits,’’ while Vermont goat cheese and Shropshire blue are “approvals’’?

But if Local 149 skews more toward charcuterie and artisanal cheese than meat and potatoes, that’s just fine. South Boston is comfortably home to people of all collars — blue, white, ironic vintage T. When everyone is being served, that’s a successful neighborhood. The day a hot dog at Sullivan’s costs $8, we have a problem.

Local 149 is the new project of South Boston resident Jason Owens, who is also co-owner of nearby gourmet grocery American Provisions and Newton’s Biltmore Bar & Grill. American Provisions emphasizes locally grown products, grass-fed beef, and other ingredients that turn up on Local 149’s menu. The chef is Leah Dubois, formerly of vegan/raw food restaurant Grezzo, now elbows deep in Mangalitsa bacon and short ribs, frying and braising her heart out. She’s even grilling the lettuce, for a fabulous take on a Caesar that incorporates romaine and crispy tofu croutons.

Dubois always made a beautiful salad at Grezzo, and it’s a strong suit here as well. A beet salad showcases roots of all colors alongside tiny quail eggs and pork cracklings. Taco salad is like none other you’ve had before. It puts a Bolognese-style sauce made from pheasant, duck, chicken, and quail together with lettuce and avocado inside cabbage leaves. With these purple petals, it looks like a tropical flower.

The menu lists bar snacks including the promising fried Brussels sprouts. Unfortunately, they’re tough and unpleasant to eat. Pate one night is bland. Better are selections from a long list of off-menu items recited by the friendly and generally capable servers. Hog wings are tiny braised pork shanks in a sweet chili and hoisin barbecue sauce. Eating them off the bone is an experience similar to eating a chicken wing. Pan-fried pork cheek wontons with smoked celery root are such a hit we have to order a second plate. These snacks are just that — a few bites big.

When it comes to entrees, however, portions are quite generous. Seafood scampi is a heaping plate of lobster tail, shrimp, mussels, and octopus served over angel hair pasta with lemon and garlic butter. The dish is plentiful but light, the seafood nicely cooked.

On the other end of the spectrum is chicken and waffles, a giant, heavy serving of fried chicken with a blueberry waffle. One night it’s a winner, the chicken’s crisp coating giving way to juicy meat. Another night, the bird isn’t as ably fried, and the waffle is dense and bready.

Entrees don’t break $20, but they come close. More economical are sandwiches such as the ham and cheese, excellent country ham and prosciutto from Johnston County in North Carolina, paired with manchego and bread-and-butter pickles on rye. The night we try it, it’s over-the-top buttery, toasted to a crisp. A cheeseburger is a satisfying combination of good beef (it’s made from grass-fed sirloin) cooked medium-rare, cheddar, and pickled green tomatoes. We top it with house-made Canadian bacon for an extra $2 but wish we’d gone with regular crisp strips; the texture of Canadian bacon doesn’t complement the mix. Tuna burgers are served on English muffins, with onion marmalade, pickles flavored lightly with wasabi and ginger, and the “eggplant bacon’’ that won a following at Grezzo. After marinating thin strips of eggplant in agave, soy, and cayenne, Dubois puts them in a dehydrator until they’re crisp. Plantain chips on the side are a nice idea, if heavy and starchy.

“Heavy and starchy’’ can also apply to the fried Fluffernutter, along with “sticky and sweet.’’ The iconic peanut butter and Fluff sandwich here is made on brioche, with local peanut butter and ripe bananas. (The Fluff, of course, is local, too.) The sandwich is dipped in blueberry pancake batter, fried, and topped with raspberry foam. Overwhelmed by the fry job, the flavor of the Fluff fades into the background. Other “bells & whistles’’ (known in common parlance as dessert) include Somerville’s Kickass Cupcakes and the Amazing! Five Dollar Milkshake. It’s thin but with a compelling nutty flavor, made with malted chocolate ice cream and maca powder, a Peruvian root some call a superfood. It’s said to boost energy and libido.

Or you could just have a cocktail. Bar manager Mike Stankovich applies his experience from the Biltmore to the drinks program, which is geared toward beer and craft cocktails. There are about 20 selections on tap, many of them local or Belgian. (If you want Bud, it will come in a can.) There’s skill behind the bar, which produces well-balanced versions of the Toronto, sloe gin fizz, and more. For those committed to drinking wine, there are a few reds, whites, and bubblies on offer.

The restaurant used to be the Farragut House, an Irish pub. The space features a wood-burning fireplace, with a sleek metal take on a steer’s skull hanging above. There are tin ceilings and reclaimed wood floors; tables are painted with blackboard paint and topped with containers of chalk for doodling. A collection of colorful vintage seltzer bottles decorates one wall. There aren’t many places for larger parties to sit, and the restaurant is busy and loud most nights.

That’s because upscale comfort food may be overdone everywhere else in the city, but in South Boston, it’s still refreshing, an alternative to pervasive pub fare. Local 149 may not be compelling enough to draw hordes from outside the area. But that is exactly not its point. It’s here to serve those who live nearby, and it does its job well.

Noise level Can be very loud.