A mess of pasta choices at Comella's 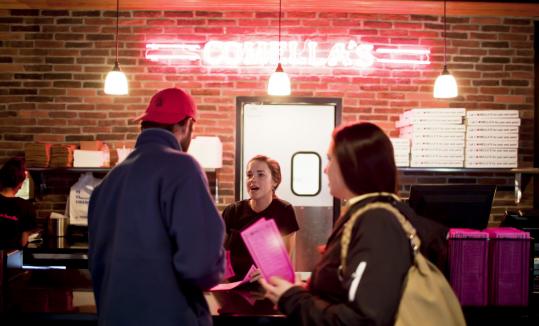 There was much upset in Belmont Center when the Charlesbank Bookshop closed its doors more than a year ago, and until recently, the Leonard Street storefront sat empty. Then brown paper swathed across the windows and a town waited to see what would emerge. Comella’s opened a few weeks ago, in a place with no shortage of Italian restaurants, including two — il Casale and Stone Hearth Pizza — a few steps away.

But the appetite for Italian food seems to be sustaining this new restaurant, the company’s eighth in the area. The small dining room has been packed on most nights since Comella’s began serving its Italian-American comfort menu, heavy on red sauce and cheese. It’s mostly counter service here, but your orders are brought to the table. The family-owned company includes dad Gene Comella, and sons Matt and JP, daughter Erin, an uncle, and two cousins.

This restaurant is sleeker than some others in the mini chain, with a small bar — six seats and one bar table — and modern black tables. But the dishes are the same: an astonishingly long menu whose sauce variations create a total of 120 pasta and ravioli combinations. And that number doesn’t include Comella’s famous messes, giant piles of pasta and sauce with a host of added ingredients, from eggplant to sausage. There are pizzas and sandwiches and salads, soft and buttery garlic bread (75 cents a slice), and a few Italian desserts.

Comella’s, which started in 1988 with a single Wellesley location, is not the best Italian restaurant in town, but the newcomer’s menu is longer and the prices are generally cheaper, especially considering the mass of food that constitutes a portion. One colossal bargain is the 16-inch cheese pizza ($5). Food can also be ordered in larger portions: by the bucket, half bucket, or gargantuan double bucket (serves 20 to 25).

Pastas can be ordered with a variety of sauces — Marinara, pesto, meat, sun-dried tomato, Alfredo, a simple elixir of oil, butter and garlic, all $1.50 extra; the default sauce is Marinara, a sweet, thick tomato sauce. We order lobster ravioli ($15.99) and forget to specify oil, butter, and garlic sauce. The Marinara sauce overpowers the lobster, though it works better with the mushroom ravioli ($9.99), which is packed with mushrooms and holds its own. Sweet potato ravioli ($11.99) is so good, we eat some of it without any sauce, plump half-orbs of dough filled with a mixture of spicy pistachios.

Comella’s pesto (we try it on the homemade fusilli, $7) is thick and leafy, and arrives with an oddly gritty texture. We order pesto on a second visit, and once again, the texture persists. We do like the soft fusilli, long hollow spindles of pasta. The messes start with Ma’s mess ($6.99), a vegetarian base with pasta, Marinara sauce, and cheese. The other messes — including versions with eggplant, sausage, and lasagna — are still bargains, priced up to $15.99. But though this may be blasphemous at Comella’s, which plays up the secret ingredients in its messes, we like the other pastas better.

Seating arrangements make this location a bit less kid-friendly in a kid-heavy town. The restaurant doesn’t yet take reservations, although that might change. Tables can be hard to snag. We overhear cashiers explain repeatedly to customers that they should make sure they have a table before they order.

Tiramisu ($4) is disappointing, a simplified version of the dessert, more custard and less the complex arrangement of sweet and bitter. Cannoli ($2, $1.25 for minis) are better, filled with very light cream, the shells crunchy, even the next day. Storing well is one essential for Comella’s food. With portions this size, there will always be doggie bags.