Boston’s best restaurants are in Cambridge

Cross the river for innovating, experimenting — and some lower rents, cheaper liquor licenses 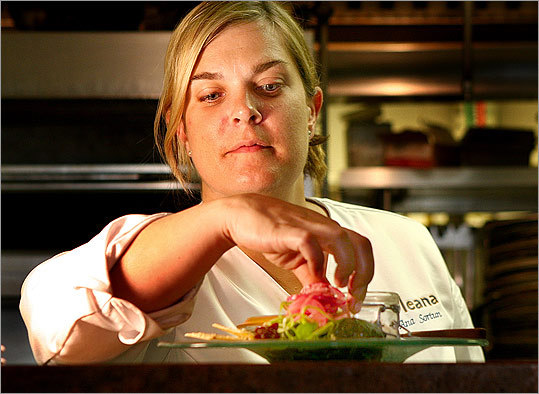 Boston has the North End, famous for Italian fare. The South End is home to bistros, tapas restaurants, and gastropubs, cheek by jowl. Allston, Chinatown, and East Boston showcase the flavors of the world.

So what is Boston’s best restaurant neighborhood? None of these. It’s Cambridge. That’s right. Not in Boston at all. All the way on the other side of the river — a journey Bostonians seem eternally loath to make. The trip is neither long nor arduous. With its views of water and sailboats and skyline, it’s downright pleasant (well, unless you’re driving over the BU Bridge). But the Charles River represents an aquatic mental block. Want to end a friendship? Move from Boston to Cambridge, or vice versa.

“It’s a totally different world,’’ says Charlie Perkins, owner of the Boston Restaurant Group, a real estate company that brokers restaurant deals. “I’ve worked with a lot of chefs. The Boston chef doesn’t want to go into Cambridge. People in Cambridge are very comfortable in Cambridge. The Charles River is a line of demarcation.’’

That line isn’t just geographic. It’s cultural. Boston is all business; Cambridge is intellectual. Boston is suits and ties; Cambridge is T-shirts and jeans. Boston has style; Cambridge has substance. These are generalizations, to be sure, but ones that inform dining in both cities.

There are the small advantages: Cambridge, home to both Toscanini’s and Christina’s, has the best ice cream. Despite Boston’s proximity to the water, Cambridge also has the area’s finest seafood shop, New Deal Fish Market in East Cambridge. That neighborhood offers a taste of Portugal, serving bacalhau, linguica, and other mouthwatering specialties. Coffee culture in both cities is improving, with new outposts such as Voltage Coffee & Art (Cambridge) and Thinking Cup (Boston). But Cambridge squeaks out ahead here, too, with the pending arrival of new coffee spots from chef Michael Leviton (part of restaurant and cafe Area Four) and the people behind Arlington small-batch roaster Barismo.

But what really makes Cambridge great is its spirit of innovation and experimentation. Boston is high-profile. It draws the bigger names (Todd English), the more-established chefs (Barbara Lynch), the chains looking to establish flashy flagships (Legal Sea Foods). But Cambridge has a cadre of young up-and-comers trying new things, upending tradition, still working to make their bones. These are the people shaping the Boston area’s culinary direction.

“There are talented chefs in Boston and Cambridge,’’ says William Kovel, who was chef de cuisine at Aujourd’hui at the Four Seasons Boston and is now opening his own restaurant, Catalyst, in Cambridge. “The young, vibrant chef-owners defining the movement in both cities are in Cambridge. Boston has the Michael Schlows and Ken Oringers. It’s tough to get into that market because you’re competing against those guys.’’

In Cambridge, you find chefs such as Tony Maws (Craigie on Main), Chris Schlesinger (East Coast Grill), and Ana Sortun (Oleana) who have influenced the way we eat today. (This week, Maws won the James Beard Foundation’s 2011 award for best chef in the Northeast, which Schlesinger won in 1996 and Sortun in 2005.) Newcomers such as Jason Bond are arriving to carry the torch. Bond has worked in Boston restaurants such as Beacon Hill Bistro and No. 9 Park, as well as the Inn at Little Washington in Virginia and more. But when it came time to open his own place, he did so in a less-established corner of Cambridge, the neighborhood known as Area 4 (for which Leviton’s new place is named). Bondir sits on a stretch of Broadway located between Central, Kendall, and Inman squares. Bond lives nearby, but he also explored opening in Boston.

Bondir features inventive, unusual dishes prepared with local, seasonal, sustainable ingredients. Although those concepts are now buzzwords, Cambridge has long been on board when it comes to local, seasonal, and sustainable, thanks to the efforts of chefs like Peter Davis at Henrietta’s Table and Peter McCarthy at EVOO (which, granted, only moved from Somerville to Kendall Square last year, along with sister restaurant Za). When Sortun started shaping dishes around ingredients from her husband’s farm, when Maws began serving noses and tails, it was considered maverick. Now it’s hard to turn around at a restaurant without bumping into a dish of offal or local produce.

Rachel Miller Munzer of Cambridge French-Southern restaurant Hungry Mother previously served sandwiches and such at Rachel’s Kitchen in Boston, along with husband Alon Munzer. “Cambridge is a little more environmentally focused,’’ she says. “When we had our coffee shop, we tried to recycle, but it was very hard for restaurants to do. Alon and I would bring the recycling home with us, for the most part. You come to Cambridge and they require you to recycle. You have to get a contract, which is great.’’

Cambridge operators are eager to embrace new ideas, often in a spirit of fun. Will Gilson of Garden at the Cellar began staging pop-up restaurants in the area about six months ago. These are “restaurants’’ that pop up for a few nights in, say, an antique shop, hair salon, chocolate factory, or coffee shop — all venues at which Gilson and partner Aaron Cohen have hosted the events. Their next pop-up takes place May 20 and 21 at the British consulate in Kendall Square. It will feature a five-course menu inspired by the United Kingdom, featuring dishes such as seared foie gras and crumpets, Earl Grey tea-smoked duck bangers with bubble and squeak, and fish and chips made with local dayboat cod.

For years, trucks have offered sustenance near Boston and Cambridge campuses. But the gourmet food truck movement continues to pick up steam nationally. Locally, Cambridge food truck Clover was the one to really get the ball rolling. Now there are several Clover trucks, as well as a brick-and-mortar store in Harvard Square, and Boston has plenty of other interesting food on wheels. A host of new food trucks will roll up to the Rose Fitzgerald Kennedy Greenway by Memorial Day weekend, selling everything from barbecue to South Indian dosas to grilled cheese to cupcakes. Cambridge often starts trends that Boston follows.

Navigating Boston’s licensing board and neighborhood associations can be tricky, Perkins says. “You’ve got Newbury Street, which wants trash pickup seven days a week. Bay Village is really tough; they’re not going to allow another liquor license in there. In Boston, for fast food you need a 36A permit for takeout. You don’t have that in Cambridge. There are codes all over. Outsiders avoid Boston because of the zoning and permitting; they’re a real toothache. We don’t welcome new people coming in. It’s easier in Cambridge.’’

Miller Munzer finds Cambridge a good environment for small operators. “There’s a different feel over here. There’s bureaucracy here as well, but in some ways the attitude is a little better. Cambridge just has more of a culture of independent businesses.’’

Kovel agrees. “Cambridge has been great,’’ he says. “It’s a lot more business-friendly and is really embracing restaurants.’’ When he applied for Catalyst’s liquor license, the members of the License Commission were encouraging. “They said, ‘This is great. We can’t wait to come in. We used to go to Aujourd’hui.’ We all had a laugh. They’re excited and willing to support you.’’

Catalyst is slated to open in August near Kendall Square, a former dining desert finally coming into its own. It will feature a refined version of French countryside fare, with plenty of meat cooked on spits. Catalyst is part of office complex Technology Square, as is Leviton’s Area Four, which will debut in stages. Its cafe will open in a few weeks, followed by the restaurant, which will showcase wood-burning ovens and dishes from around the world, prepared with local, sustainable ingredients.

Also in the Kendall area: Abigail’s, an ingredient-inspired neighborhood restaurant, is coming soon from a team with experience at East Coast Grill and the B-Side. The operators of Dali in Somerville, Tapeo in Boston, and Solea in Waltham are opening a fourth tapas bar, Kika Tapas. Gary Strack of Central Kitchen is behind upcoming Kendall Square restaurant Firebrand Saints. And the beer-centric Meadhall just opened its doors.

Contrast that with the Boston waterfront, where development is occurring at a similar pace. Recent openings have included Cronin Group restaurants Jerry Remy’s Sports Bar & Grill and Temazcal Tequila Cantina, Dallas-based steakhouse Del Frisco’s, and a mammoth Legal Sea Foods. Restaurants in these parts are more likely to have CEOs than chef-owners.

Of course, that’s not always the case. More new spots are on the way, from Jody Adams (Rialto) and Jason Santos (formerly of on the Square). She is behind Trade at Atlantic Wharf, where steakhouse chain Smith & Wollensky is also opening a branch. He will open Blue Inc. on the Greenway. Both could be called celebrity chefs: Adams has appeared on “Top Chef Masters’’ and Santos on “Hell’s Kitchen.’’ And both arrive from the other side of the river.

Cambridge restaurants and their chefs

Cross the Charles to meet some of Cambridge's top chefs.
Your comment is subject to the rules of our Posting Policy
This comment may appear on your public profile. Public Profile FAQ