Innovative touches from the kitchen

606 Congress a beacon on the waterfront 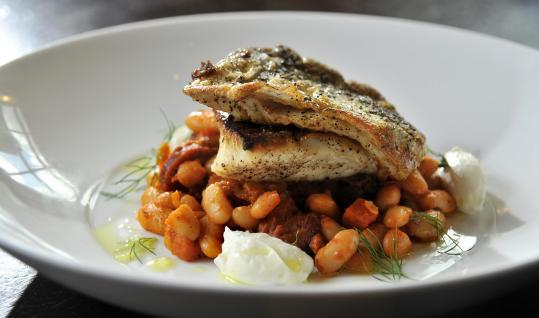 Haddock is served atop white beans cooked with chorizo. (Josh Reynolds for The Boston Globe)
By Devra First Globe Staff / May 4, 2011

The mayor has dubbed it the Innovation District. The city’s hope is that the South Boston waterfront will be a hub for tech companies, Internet start-ups, and entrepreneurs. Unfortunately, that vision doesn’t seem to extend to cutting-edge dining. Case in point: the new Liberty Wharf, where offerings include Cronin Group restaurant Jerry Remy’s, a second branch of the Fenway sports bar and grill; Temazcal, an upscale Mexican restaurant with a focus on tequila, also from Cronin; Del Frisco’s, a Dallas-based steakhouse; and the biggest Legal Sea Foods yet, its three-story flagship.

These may be good places to conduct business, gather after work, or cavort on weekends. They make the waterfront feel like a more-established destination. And they are an update from Jimmy’s Harborside. But one would be hard-pressed to argue that they are innovative (Temazcal’s iPad menus notwithstanding). Sleek, shiny, and substantial, they are a far cry from the kind of small, independent restaurant that moves Boston’s food scene forward — the culinary counterpart to the companies the city hopes to woo in shaping the evolution of Boston business.

Still, innovation happens, sometimes in unlikely places. Case in point: 606 Congress, in the Renaissance Boston Waterfront, a Marriott hotel. An airy room with blue upholstery and wood finishes, it looks like a perfectly nice but generic hotel restaurant. Indeed, when the Globe reviewed it in 2009, the food was nothing to write home about.

Then, in November, the hotel brought on Rich Garcia as executive chef.

Garcia impressed when he was at Tastings Wine Bar & Bistro, an independently operated restaurant in Patriot Place, another unlikely setting. There, he made food that was both creative and comforting, dishes such as roasted vegetable hash with poached egg, macaroni and cheese studded with truffles, and braised pork shank with butter beans, bacon, gremolata, and almond milk foam. It was a pleasure to find him alongside the Bar Louies and Red Robins in Foxborough.

At 606 Congress, working with executive sous chef Dan Alvarez, he focuses on sustainability and local sourcing. This is most evident when it comes to seafood, also a concern of previous chef Greg Griffie. The likes of fluke, haddock, and squid are caught in the region. Last year, Marriott launched a sustainability program, FutureFish, in partnership with sustainable seafood broker CleanFish. Garcia has also started working with an initiative called Trace and Trust, which lets customers know when, where, how, and by whom their dinner was caught. By going to Trace and Trust’s website, a diner can search by location or fish ID number, learning that, say, fisherman Steve Arnold caught the fluke near Block Island. The site offers further information about the fish species, location, fisherman, and vessel. Garcia is beginning to use Quick Response codes, too. Readable by smartphone, the QR codes provide customers with similar information. Chef Jose Duarte, who uses the codes at Taranta in the North End, introduced him to the technology.

These local ingredients serve as a canvas for flavors and preparations that hark back to Tastings, still creative and comforting. Garcia’s menu doesn’t make the usual concessions for picky hotel guests. (Lunch, lounge, and room service menus offer sandwiches and such alongside his more unusual creations.) Let them eat beef heart. They’ll like it, too. Grilled and sliced thin, it tastes like wonderfully flavorful steak. It’s served over golden beets with an eggless mayonnaise made from agar agar and milk, spiked generously with horseradish.

Tendrils of octopus also bene fit from grilling, charred and meaty, coiled together over chorizo puree with fingerling potatoes. Coins of pickled chorizo visually mimic the sliced potatoes, and the dish is playfully festooned with smoked paprika-sprinkled popcorn.

Hook-and-line-caught haddock is served, crisp-skinned and moist, atop white beans cooked with chorizo. Narragansett yogurt lends creaminess to the dish, and fronds of dill provide herbal counterpoint. Inky black tagliatelle is tangled together with pieces of Maine lobster, fava beans, and wild mushrooms.

Lamb shoulder is seared, then cooked for 24 hours in a CVap (controlled vapor) oven, a modern version of braising. It comes out meltingly tender yet crisp at the edges, served with roasted beets, beet greens, lamb tongue, and pickled mustard seeds. Chicken is served two ways — juicy roast breast and crunchy fried drumstick — with an excellent red wine spelt risotto and whatever spring vegetables are available. And that decadent truffle mac and cheese from Tastings reappears here as a side that could serve as an entree.

Not every dish works. Spring pea soup with a Parmesan marshmallow sounds exciting, but it tastes somewhat like a bowl of fresh-cut grass. Raw fluke isn’t sliced thin enough, and the mild fish demands a sprinkle of coarse salt. House-cured duck prosciutto is also cut too thick, with a somewhat slimy texture. Accompaniments on a veal dish are wonderful: a runny egg, a spill of polenta tangy with goat cheese, a blast of spring from fiddleheads and morels. But the meat is disappointingly chewy.

For dessert, elderflower panna cotta is made with so much gelatin it barely moves. But chocolate cake gets a boost from beets and bits of raspberry crisped in liquid nitrogen, and a somewhat bland carrot cake is improved by pan frying. And who wouldn’t like a milkshake made with Guinness ice cream and malted milk balls?

The wine list isn’t as creative as the menu; it could use an update. Attentive and friendly servers are reasonably well versed in both the food and the drink here.

It speaks to good coaching, which isn’t a surprise. Garcia landed his first food-service job at a bakery at age 12, but he got his real start cooking in the Marine Corps. While he was in the service, he went to cooking school, where, he says later by phone, leadership was drilled into him alongside culinary fundamentals. He’s active in the local community, working with the likes of Share Our Strength and Chefs Collaborative. Via Twitter and on his blog, Chefs Daily Food Bank, he chronicles his kitchen explorations with curiosity and enthusiasm. He’s just the kind of guy you want in the Innovation District.

Restaurants don’t only serve food. They create atmosphere. When they dish up excitement, they make their neighborhoods feel exciting, too. Want to attract innovative thinkers? Fill the area with innovative restaurants and watch them come.