Native coffee is a specialty 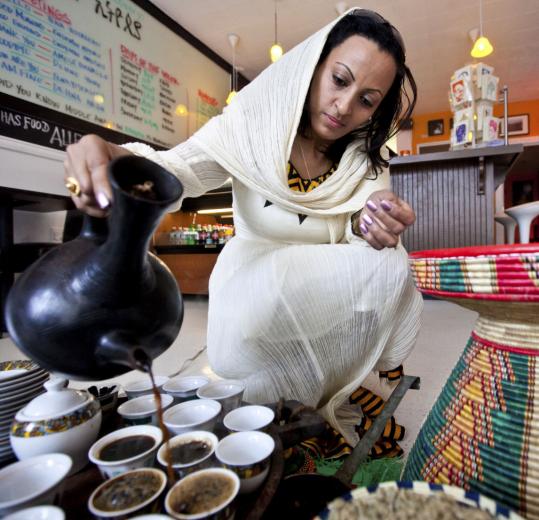 There’s a white 1970s-style strip mall above the Green Line’s Symphony Station. Hidden amid its tax prep and tanning centers is Lucy, a restaurant named after the world’s oldest celebrity: the Australopithecus woman who lived more than 3 million years ago and was unearthed by archeologists in Ethiopia in the 1970s. Boston’s Lucy is almost as hard to find (look upward to the building’s mezzanine). Its food is a major discovery.

I have often found food at Ethiopian restaurants to be disappointing, especially the spongy flatbread known as injera, which can be oddly tart and gray. Since it accompanies most dishes, bad injera can ruin the meal. At Lucy it was bready, golden, and firm, with a hint of lemon, and the scent of fresh-baked sourdough bread. “The injera is moody,’’ explains chef-owner Girmay Cirsto Ziegaye. “It takes two days to make, and you have to watch carefully or it can overferment.’’ His wife, Netsanet Woldesenbet, explains that in Ethiopia the injera would be made with 100 percent teff (an indigenous grain). But “it’s cold in Boston, so we need to add some wheat flour so it comes out properly.’’

This is the kind of care I found in every dish on the short menu. Dinner offers just six entrees, half of them vegetarian, and a few appetizers.

But let’s start with breakfast. Che’che bsa ($7.99) is a moist, crumbled corn bread of sorts seasoned with a hint of cayenne pepper and drizzled with honey and cardamom-scented butter. It’s served with a mug of coffee, made from beans Lucy imports from Ethiopia. The coffee is sweet and chocolaty without milk or sugar. Not that you could get any — Ziegaye politely refused, saying, “Our coffee is best just as it is.’’ He will allow a sprinkle of salt on your espresso, as is common in Ethiopia (and, of late, in trendy New York espresso bars).

The star of the meat dishes was the zilzil tibs ($10.95). Small dice of lean sirloin are seasoned with Ethiopian mitmita — a mix of cumin, African chili, cardamom, ginger, and cinnamon — and sauteed with onion, garlic, and jalapeño. On one night the dish was spectacular — devoured in minutes by my table-mates as they pinched it out of my bowl using the injera bread (forks are not offered). On another night, the dish was simply good, and I got to eat a bit more of it.

At 6:30 on Friday and Saturday evenings, Lucy offers an Ethiopian coffee service ($6). Over 90 minutes, in the center of the spacious dining room, women wash, roast, and grind the beans using traditional utensils, then brew the beans in a clay pot, and pour for the guests. As is customary in Ethiopia, men do not assist in the service.

The dozens of coffee preparation items are on display in the center of the dining room all week, leaving room for relatively few tables. I ask Ziegaye, respectfully, if tradition requires the arrangement to be left out. “No,’’ he laughs. “You can thank the City of Boston. We’re only licensed for 20 diners. And it’s a big room.’’