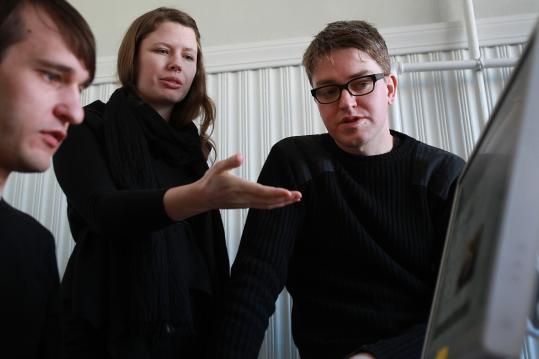 In December it appeared, so simple it was brilliant: a Tumblr blog called “Never said about restaurant websites.’’ In black type on a white background, it featured a stream of ironic quotes.

“If the flash animation is sick enough, I don’t mind if it crashes my browser.’’ — No people.

“I love downloading PDFs. Even if the menu is totally out of date, it’s worth the thrill.’’ — Absolutely no one.

“Who needs the phone number of a restaurant when you could be enjoying stock photos of food?’’ — Zero people in the history of time.

It quickly went viral, linked to by websites such as Eater and Huffington Post, retweeted hundreds of times.

A few weeks later, the website McSweeney’s Internet Tendency ran a piece titled “If This Fusion Restaurant’s Website Could Talk.’’ An excerpt: “HEY HEY HEY! Watch this slide show! LOOK! We have modern chairs and minimalist light fixtures!! LOOK! It’s an orchid floating in a pool at sunset! Want to hear some DANCE MUSIC???? Mute it any time you like! Just click the animated parakeet flying around the screen! You want to get into the site??? Just click the smallest fork!!! DANCE MUSIC!!!!!’’

Restaurant websites are famously bad. They are easy targets for mockery — often user-unfriendly tools that feature Flash animation, embarrassing techno music, and menus that turn out to be PDF files, as you realize only once they start downloading. Meanwhile, basic information about location and hours is hard to come by, daily specials lists date to 2006, pages are permanently “under construction,’’ and the darn things won’t load on your iPhone.

Anyone who enjoys eating out spends a lot of time looking at these sites. Perhaps you too have tried to view, say, the menu at Bergamot, only to be buzzed by an adorable cartoon bee flying whimsically all over your screen. Or maybe, on a groggy Sunday morning, you’ve turned to Coppa’s website for information about brunch and been defeated, in your pre-coffee state, by screens asking you to wait while they load, advising you to resize your browser window, and assaulting your eyeballs with flashing yellow and brown graphics. And God forbid you’ve needed information about a specific Todd English restaurant. You might have tracked it down, but not until after watching an animated version of the chef freaking to dance music while seasoning food and sharpening knives. It’s enough to make you want to create a restaurant website parody of your own.

This is not to single out these restaurants’ websites, which are no worse than many local establishments’. And the people behind them are aware they need work. Bergamot recently redid its site, and that bee is no longer on the wing; a long-outdated menu has also been replaced by a current one, albeit divided into separate PDFs for appetizers, entrees, etc. (Unfortunately, descriptions of the dishes are unreadable if you’re on a Mac.) Coppa chef and partner Jamie Bissonnette says they’re trying to figure out how to remove some of the Flash on their site. English’s website is being redone; a new version should launch within the next month.

But the question remains: Why are so many restaurants’ sites so challenged? Chefs and restaurateurs are arbiters of taste offline. Their good judgment can’t simply fly out the window when they take to the Internet. So why do bad websites happen to good restaurants?

The reasons, it turns out, are fairly straightforward (although no one can explain the dancing critters or strip club soundtracks).

The first is how swiftly things move online. Websites have shelf lives. What may have looked good five or six years ago seems impossibly dated now.

“The website is a sign of the times. It represents the trends of that moment on the Web,’’ says Rory Keohane, cofounder of Oat, the Somerville graphic design and branding studio that has created websites for Bondir, Trina’s Starlite Lounge, Russell House Tavern, and other local restaurants. For a designer, looking at a website is like counting the rings on a tree trunk — it’s easy to pinpoint its age, he says. “No one would build a Flash site now for a restaurant. Five years ago, it was ‘Where are the most bells and whistles?’ That’s not a justification for them still being there.’’

For designers and users, the emphasis now is on accessibility. Websites have to be easy to navigate, for computer users as well as people on smartphones and tablets. This isn’t news to restaurateurs, who are as attached to their gadgets as the rest of us. Their websites just have to catch up.

“We’re moving away from Flash. Everyone’s always on their iPhone,’’ says English (who carries both an iPhone and BlackBerry, if you were wondering). “The new website is going to be cleaner, faster, more modern. It will be more about accessibility and ease of using it. We’re creating Facebook sites for all the individual restaurants. Anything with social media is really important right now. It was only, like, three years ago that we redid it. Things come and go.’’

Then there’s the matter of money. Restaurants have tight budgets at the best of times. When they’re opening, cash is flying out the door. Often, there’s simply not the budget to create a great website, something that might reasonably cost anywhere from $5,000 to $12,000. (Although some of this may be paid in trade, a nice perk for a food-loving designer.)

“We’re a small restaurant so we can’t really pay for it. We don’t even have an office,’’ says Bissonnette. Coppa’s site was designed by an aspiring Web developer, the boyfriend of a former cook at sister restaurant Toro. “I’m not really an Internet guy. My wife and I share a Facebook page. I’m addicted to . But as far as restaurant websites, I never paid much attention. I kind of wish I had,’’ Bissonnette says.

It’s the rare chef who has paid much attention — they’re chefs after all, not website designers. And this helps account for those pesky PDFs. They are there because they are easy to deal with. A chef can swap one file for another without having to meddle with code.

“It’s a nice advantage strictly from presentation,’’ says Adam Gesuero, director of Image Conscious Studios, an East Boston graphic design studio whose clients include Canary Square, Highland Kitchen, and Hungry Mother. By using the actual menu file, “it can look just how it looks in the restaurant. But mobile devices that don’t play nice with PDF become a problem.’’

With restaurants focusing on local, seasonal ingredients, ease of use is more important than ever. Menus change frequently.

The “Never said about restaurant websites’’ blog doesn’t exist for the sake of mockery alone. It also features an instructional section titled “How to make a less horrible website.’’ Instead of using PDFs, it suggests, simply photograph the menu each time it changes. Then post the images as blog entries tagged “menu.’’

There are other things restaurants can do to establish a strong Web presence without too much effort or expense.

When a restaurant first opens, Keohane suggests starting out with a simple placeholder page. Then, when there’s time and money to do it right, roll out a more elaborate site. This is Oat’s strategy with client Island Creek Oyster Bar, whose initial website includes basic information such as address, phone number, and hours and a link to reservation site OpenTable. A full site will launch soon. Gesuero’s Image Conscious Studios is doing the same with Canary Square.

“Don’t go down the route of ‘I have a nephew who knows computers,’ ’’ Keohane warns. “What’s people’s first impression of a restaurant? It’s usually the website at this point. People make purchasing decisions based on that.’’

For that reason, he says, it’s also worth paying for good food photography. “Professional photographers are professional for a reason. They take better pictures than you and I,’’ he says. “Shooting food is really difficult. I’ve heard plenty of times, ‘Oh, my friend has a nice camera.’ It’s not going to do it justice.’’ One great shot is more effective than a gallery of poorly photographed dishes, he says.

But in the move to simplicity, designers stress the importance of not taking it too far. A restaurant website doesn’t just exist to communicate information. It’s a marketing tool, and it helps create an atmosphere.

“You are connecting with people on an emotional level,’’ Gesuero says. “It helps drive their decision to go to that restaurant. There are ways to have something rich and give an awesome, unique experience that maintains some level of timelessness.’’

But then what would we make fun of?

Devra First can be reached at dfirst@globe .com.