Dining on the waterfront 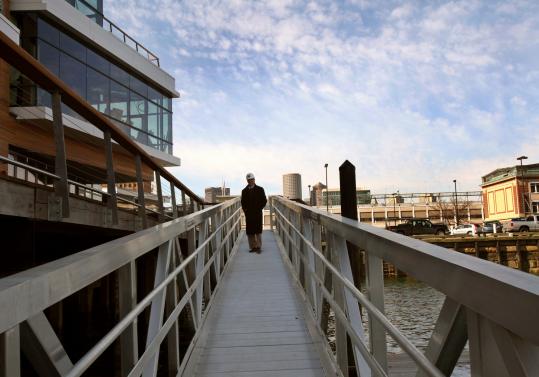 In a corner of Boston where seafood newburg once reigned, now comes the squash blossom quesadilla.

That’s the culinary transformation about to take place on the site of the former Jimmy’s Harborside Restaurant, a Boston institution that served up classic seafood for eight decades. Jimmy’s was demolished in 2007 and in its place is a new complex called Liberty Wharf, where the first of five restaurants will open next week.

Each eatery will feature outdoor seating and sweeping waterfront views. And as important for foodies, their chefs are promising some cutting edge cuisine and amenities.

One is the upscale Mexican eatery Temazcal Tequila Cantina, where diners will use an iPad to order menu items such as roasted suckling pig and huitlacoche, a truffle or fungus that grows on corn stalks and is a delicacy in Mexico.

“Our food will do things you’ve never seen Mexican food do,’’ said Temazcal chef Todd Hall, who made his name at La Hacienda, in Scottsdale, Ariz., and other top restaurants in that state.

The first restaurant to open at Liberty Wharf will be another outlet of Jerry Remy’s Sports Bar & Grill. It is scheduled to open next Wednesday. Temazcal is aiming to open by the end of March, and the others, including Del Frisco’s Double Eagle Steak House and a new Legal Sea Foods, will follow in April. The fifth restaurant has not yet been named.

The $65-million-plus complex by Cresset Development LLC is a stark contrast from the old Jimmy’s building, which formed a barrier along Northern Avenue with only a small deck on the harbor. The new restaurants have large outdoor spaces along a recently added 500-foot section of the city’s HarborWalk, as well as decks overlooking the water. There are also new docks where boaters can tie up and dine and for a period motor yacht from 1929 that offers tours of the harbor. Cresset is exploring adding sailing and fishing charters.

The development, designed by Elkus Manfredi Architects, features glass walls and wide spaces between the buildings to allow open views of the water. It also includes exotic wood finishes, including Angelique siding and a deck made of the Brazilian hardwood cumaro.

“We wanted the design to be timeless and simple,’’ said Cresset president Edward Nardi. “It should be an opportuni ty for people to get out to the water and get a breath of fresh air.’’

Liberty Wharf is the latest complex to open in the ongoing transformation of the Seaport District, where Mayor Thomas M. Menino is trying to create an Innovation District with technology and medical companies, as well as more modern homes and restaurants. “A lot of people are seeing great new opportunities there,’’ Menino said. “The effort is really coming to fruition.’’

Each restaurant at Liberty Wharf strives to have distinctive features: Legal Sea Foods is fitted with a 4,300-square-foot roof deck with retractable glass ceilings and walls; Del Frisco’s is building a floor-to-ceiling wine wall; and Remy’s has a massive bank of high-definition TVs as well as rich walnut finishes more typical of a contemporary wine bar.

“With such a premier location on the water, we wanted to do something a little more upscale,’’ said Jon Cronin, a South Boston restaurateur who is the primary investor in Remy’s and Temazcal.

Cronin, who owns the nearby Atlantic Beer Garden and opened Whiskey Priest, is also leasing office space in the four-story complex, which contains several suites overlooking the water. Other tenants are Fama PR Inc., a public relations firm, and an as-yet-unnamed financial services company. A 7,000-square-foot space is still available in the complex, which is being marketed by the real estate firm .

Photos: Liberty Wharf — from past to present