An experiment in building better food 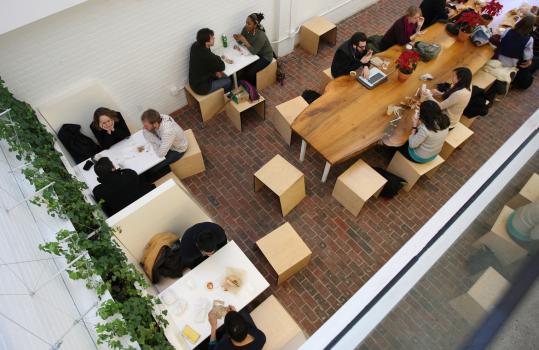 Everyone who has been to Clover Food Lab in Harvard Square, which opened in the fall, has a strong opinion about it. Here are some: fascinating, fabulous, cold, like a real laboratory, and where’s the beef? If the place is adamant about not being labeled vegetarian, why is there soy bacon in my sandwich?

Clover Food is a fast-food restaurant, almost always offering well made, high-quality food. The 80-seat place is cavernous, hard to warm up because it’s so spare, very brightly lighted, with a simple menu that hardly varies. There are white ChemTop tables, birch veneer stools, and large slabs of Maine red oak as tables and counters. It has a pop-up quality, as if the crew is here temporarily, planning to relocate elsewhere.

You enter Clover and see an electronic menu board with selections listed with wait time, say, “2.3 minutes,’’ updated often (as is the restaurant’s site and Twitter). Ayr Muir, who started the company and has shareholders now, is a graduate of MIT (Course 3, materials science and engineering). He also has a Harvard MBA and his resume includes a stint at McKinsey & Co., the management consultants. Muir works with Rolando Robledo, who has experience at The French Laundry and teaching at Johnson & Wales. Clover began as food trucks, located at MIT and South Station, where the menu was refined before it moved to bricks and mortar.

In this first location, greeters enter your order on an iPod touch system and you get change from their money belts. And then, about two minutes later, like something out of a frat house, you hear someone bellow your name. In this high-tech environment, no one has figured out how to get you to the counter without a holler.

Once there, you will see very good coffee made only three cups at a time with individual filters; fine tea leaves steeping in a little pot, one per customer; counter workers making sandwiches in delicious, puffy, tender little whole-wheat pockets. A breakfast sandwich ($5) with sliced tomatoes and cheese has a Chip-In Farm egg whose yolk breaks at the first bite, spilling golden sauce into the pocket. It might be the best thing on the menu, until you dip into creamy Narragansett yogurt layered with beautiful granola and pear compote.

Chickpea fritters, stuffed into a pocket ($5) with salad, pickles, and hummus is another gem. Egg and eggplant sandwich ($5) also contains hummus, nicely charred vegetables, and egg. One night it has an unappealing dark circle around the yolk; at lunch another day, the yolk is a pretty yellow. Fries ($3) are lowered into their bath with fresh rosemary, which lends the shoestrings their nice fragrance.

For some reason, soups don’t look appealing, but taste fine. Pureed cauliflower one night is gray, squash isn’t the coral color I’m expecting, but robust beet is startlingly bright and tastes as good.

With all this well-made food, there are annoyances. A sign tells you where to put compostables and is written on blue painter’s tape. Same for tagging the restrooms. You cannot get salt unless you ask, and when you do, the counter person wants to know what it’s for (!). It’s for my egg. If you watch the staff, you’ll see them tipping juice into a tiny cup from a big square container. Of course it splatters on the counter.

Look at this as a true lab, in which the food is evolving. While it might not be to everyone’s taste, there will probably be something for everyone. Something well made and delicious. Muir seems to be tweeting in his sleep, fastidiously answering customers’ questions, even blogging about his review interview, so he’s definitely paying attention. There’s no detail too small. Beside “City water, filtered’’ it says 2 minutes on the board. Put it in pitchers on a counter. That would take zero.