At the new Bon Chon, join the lines 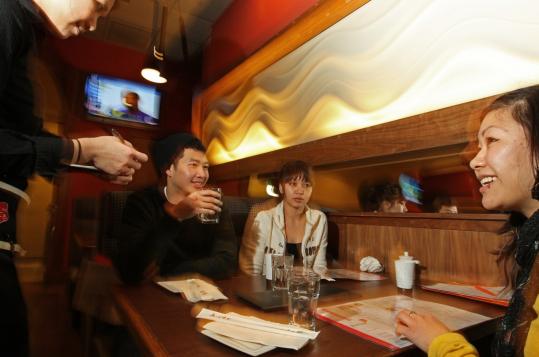 On a recent Friday night, six young Asian men, baseball caps askew, huddle in the unheated foyer of Bon Chon restaurant in Allston waiting for takeout. Frankie “The Tank’’ Gee of Quincy, one of the group and a regular here, explains that his posse gave up trying to get seated, so they snacked nearby and returned for food: 120 drumsticks of the famous namesake chicken. “We’re big foodies,’’ says Gee, “And we eat a lot.’’ The South Korean franchise is apparently achieving its worldwide mission, which is fried chicken for the trendy and discriminating.

The fad and fame of Bon Chon chicken is the initial draw. But the substance of the Allston restaurant, which seats 90, is the authentic and well-executed Korean menu added by local owners Jin Kim and business partner Henry Kim (no relation). For non-Koreans, it’s a voyage of discovery guided by attentive waitresses, and set to a dancy soundtrack of Bruno Mars, B.o.B., and the occasional Britney remix. The chain says it has 16 locations in South Korea and 15 in the United States; this is the first in New England.

Bon Chon fried chicken goes into the deep-fryer twice, possibly making it twice as good, and, against all expectation, much less greasy. Unbattered legs and wings are par-cooked in a deep-fryer, cleverly solving the flabby-skin problem. The pieces are cooled a bit, fried again, and then coated with an intensely flavored sauce that somehow solidifies to a smooth, crunchy finish. There are two varieties: soy-garlic, or (very) spicy, always served with purple slaw, and palate-refreshing blocks of sweet pickled daikon.

On a short list of kitchen favorites, okdol bibimbob, a rice and vegetable dish that arrives in a superheated clay bowl, is so hot that if you don’t stir it immediately and often, the rice burns and smokes. (I thought there was a fire nearby). My replacement bowl is the traditional marinated, thinly sliced steak saute known as bulgogi. Stirred with red pepper paste, it’s a spicy and hearty meal to fend off winter.

My waitress tells us that “corn butter’’ is all the rage in South Korea. It’s a shallow casserole of corn, crabmeat, and diced red pepper, all tossed in sweet Japanese mayonnaise, with a crust of very-browned mozzarella cheese. It’s simple, tasty, and utterly impossible to manipulate with chopsticks. (Forks are reluctantly provided.) Across the table, a warm broken-rice broth is unexpectedly effective in cooling the tongue between bites of the aptly named Korean classic, bull dak (“fire chicken’’).

There are also Japanese dishes and sushi. Takoyaki is served with papery ribbons of bonito (dried, smoked skipjack tuna) that look lifelike as they writhe and wriggle over hot, fried octopus dumplings. My startled reaction amuses the waitress. “They’re not alive,’’ she says.

Dishes of such elegant design are rare at franchises. Bon Chon’s chicken is even crunchy and tasty the next day.

Try that with KFC.

Ike DeLorenzo can be reached ike@theideassection.com