Back Bay eatery could become a hot spot 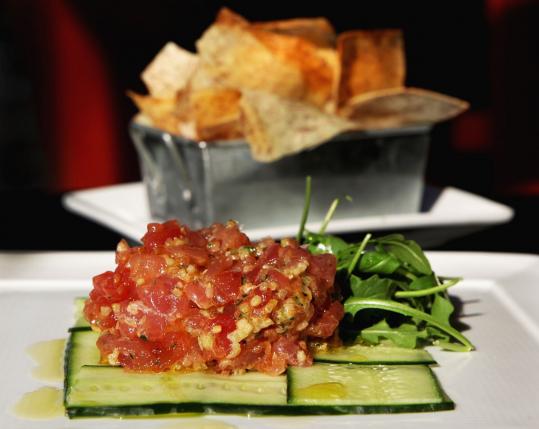 The Metropolitan Club begat Met Bar & Grill, which begat Met Back Bay. The first concept brought cosmopolitan style to a suburban steakhouse. The second did the same for suburban burger joints. Both were successful, not because the food was consistently great, but because they were the kind of places Chestnut Hill, Natick, and Dedham needed. Met Back Bay, which opened in October, attempts a more difficult trick. Right in the heart of the city, it no longer offers a taste of something rare. Cosmopolitan style? On the corner of Newbury and Dartmouth streets, there’s no shortage.

There is, however, a shortage of consistently good food. Back Bay remains mysteriously untouched by the wave of tastiness that’s swept much of this city. There are outposts, to be sure. But as a whole, it’s one of Boston’s least exciting culinary neighborhoods. “I’m coming to town,’’ e-mail the tourists and businessmen. “I’ll be staying in Copley Square. Where is the best restaurant in that neighborhood?’’

So if owner Kathy Sidell and executive chef Todd Winer can build on the energy of their other restaurants and nail the food, Met Back Bay will be gold.

They make a good run at it.

The restaurant is designed to appeal to business lunchers, the after-work crowd, neighborhood residents, and visitors alike. It spreads through several floors of an 1870s brownstone, with a dining room, several bars, and a membership-only area called Townhouse. The space manages to be simultaneously clubby and bright, with cream walls, dark floors, and leather upholstery in edible hues such as butterscotch, persimmon, and chocolate.

One night the dining room seems to represent the entire EU. A table of hulking German men in striped shirts tuck into burgers, looking like the world’s most strapping mime troupe. A posse of Italian girls appears on the scene, a girl gang in matching leather jackets. In the buzzing downstairs bar, the crowd is hungry. Each time a woman enters, all the male heads turn. Another night, the dining room hosts Boston professionals and a delegation from Cleveland in dark blue suits. The only meat in the bar comes on charcuterie platters — sometimes snacks trump sex.

The menu is designed to appeal to them all. There is a wide selection of salads small and large (oil-free dressing is available). Other appetizers tend to be covered in cheese. There are steaks and chops with duck fat fries, upscale takes on comfort food, and reimagined New England classics. A section of the menu showcases domestic cured pork and New England cheese. Classic cocktails take top billing, followed by fruitier, sweeter new inventions. To set the stage with a bit of kitsch, each meal begins with crunchy sesame seed breadsticks and a pot of WisPride cheese.

Just as the crowd changes from night to night, so does the food. One visit brings poorly made cocktails, proportions all out of whack. A chopped salad is excellent. Billed as containing “almost everything,’’ it’s a mix of lettuce, beets, broccoli, egg, bacon, and more, all cut fine and tossed with a judicious amount of vinaigrette. But truffled cheese toast doesn’t taste like truffles, and the cheese sits on the plate in a congealed lump. It comes with shiitake mushrooms that are saturated with oil, nearly inedible. A jumbo grilled artichoke is difficult to eat, the cheese-crusted leaves cooked until they’re rigid. We give up on them and go for the hearts, grilled and tender, delicious dipped in garlic aioli.

A main dish of cod is overcooked, and dry-aged meatballs are just dry. So is a dry-aged rib eye for two. What looks like it was once a beautiful steak — and is assuredly an expensive one at $66 — has had the pink cooked right out of it. It comes with a choice of steak sauce, from jalapeno jam to horseradish cream. When we ask to try a selection, our server obliges, but fails to mention she’s charging us $2 extra for each. Met Back Bay’s food already feels more expensive than it should — one pays to eat in prime real estate. But a surprise surcharge for a tiny tub of sauce feels cheap.

Redemption comes in the form of more steak, two mini bone-in tenderloins accompanied by golden scrambled eggs. The meat is juicy and bright at the center, the eggs cooked skillfully into a fine curd, sprinkled with chives. This is caveman food for sophisticates.

One of the most unusual dishes on the menu is “1980’’ curried spot prawns, a version of the shrimp curry served at Joseph’s, which once occupied this space. (The restaurant was most recently Joe’s American Bar & Grill, which moved a block over on Newbury Street.) The prawns are served head on, with a big pile of basmati rice, lentils, raita, and an assortment of chutneys. On the side is a pitcher of curry sauce to pour on as you please. It’s a pleasure to eat, the tastes varying with each bite.

Cider doughnuts are also a pleasure, three plump circles served in a little metal trough with vanilla cream for dipping.

On another visit, pleasure is easier to come by. The cocktails are perfect. Our waiter is perfect, too — he is funny, attentive, not afraid to admit he doesn’t know the answer to every question, and happy to find out.

A house ham-and-cheese board turns out to be boards plural. One is draped in delicate slices of ham, wonderfully salty prosciutto, and robust salami. The other features four cheeses with Marcona almonds, quince paste, and honey. The components are complementary, the portions generous.

Met Back Bay offers choose-your-own mezze platters. We concoct one of oily, unremarkable cauliflower, good hummus with pita, and a show-stopping dish of corn. The kernels are mixed with truffles and the tiny, spherical Sardinian pasta called fregola, a mix of surprising flavors and textures that work perfectly together.

Tartare of beef, tuna, or salmon is prepared tableside. Our server wheels up a cart, then tosses raw tuna with Sriracha, onion, soy, and ginger. Sadly, he takes the condiments with him when he leaves; it would be nice to be able to doctor the dish to one’s own taste.

Other highlights include a tangy, al dente four-cheese macaroni in a giant skillet, and a burger that tastes as large as it looks. The 10-ouncer is made from dry-aged beef and topped with double-smoked bacon, onions cooked in Port, and a crisp plank of extra-sharp cheddar. It’s all umami, all the time.

So if the Chinatown salad — duck with vegetables and almonds — is drowning in bland dressing, and if the molten caramel-filled chocolate cake that takes 15 minutes to prepare is not worth the wait, we barely mind. Everything doesn’t have to be perfect. It just has to be consistently good. Met Back Bay isn’t quite there, but it still rises to the top of Newbury Street’s offerings. I’ll come back for that ham and cheese board. I’ll send the tourists and businessmen, too.