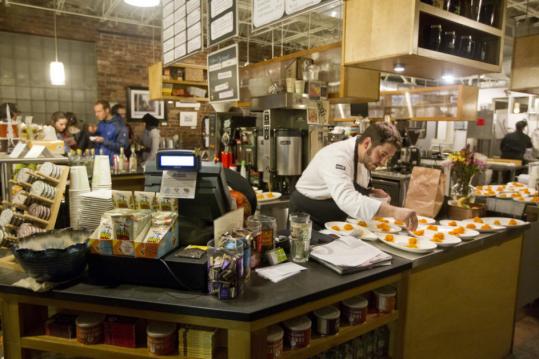 Will Gilson adds a garnish to appetizers prepared by Shannon Casey and Mark Farone at a pop-up dinner at Bloc 11. (Matthew J. Lee/Globe Staff)
By Bridget Samburg Globe Correspondent / January 26, 2011

SOMERVILLE — By day, Bloc 11 Cafe is a bustling coffeehouse packed with parents trying to corral children, adults engrossed in computer screens, and casual meetings at simple tables. For three weekend nights recently, the former bank became a full-fledged restaurant offering a $60 prix-fixe five-course dinner. It was chef Will Gilson’s latest foray into creating a pop-up restaurant, the movable feasts that are happening in many cities.

Gilson, who opened Garden at the Cellar in Cambridge four years ago, is stationed at the small barista’s island at Bloc 11, finishing a sunchoke rosti appetizer, which comes with eggplant puree, fried feta, and olive tapenade. He’s cooking for 72 people. Plating is “a nightmare,’’ he says. Counter space is sparse and all dishes have to be sent out at the same time. In his restaurant, he’s working fast, but diners are ordering different things so he’s never making six dozen of a single item at once.

New York and Los Angeles have been home to pop-up restaurants with great success for the past several years, some cropping up for just a week or two in abandoned commercial spaces, complete with peeling plaster. In November Gilson set up shop in Mohr & McPherson, the eclectic South End furniture shop.

Pop-up diners are expected to embrace a communal style. You have to make conversation with strangers and get comfortable with the notion that a fine meal isn’t in a traditional setting. A cocktail hour with wine and hors d’oeuvres (Gilson’s ultra-thin edamame quesadillas stood out) gives you time to sniff out table companions.

These events are meant to change diners’ perceptions of going out as much as they challenge chefs. “There’s a certain empowerment about making a reservation, asking for things, making requests,’’ says the chef. “Going into a pop-up we are removing a lot of those decisions.’’ Forget asking about parking, requesting a special table, or wanting to see the wine list in advance. The point is to succumb. “This is about challenging what our status quo is,’’ says Gilson.

Conversation for an entire dinner with people you’ve never met can be terrific or agonizing. Our small table for four is tucked inside one of the actual vaults from the original bank space. We find common ground in imagining future pop-up locations: dinner on the Red Line, a Duck Boat tour, and the divy club down the street.

To that end, a coffee shop doesn’t seem logistically difficult. But Gilson explains that at the end of each night, everything to do with the pop-up — tablecloths, wine glasses, flowers, and more — must be brought in and out for each dinner, three nights in a row. “It’s part theatrics.’’

The chef and his pal Aaron Cohen started eatBoston, a small company responsible for staging these dinners. Cohen manages the logistics, Gilson the food. The first night at Bloc 11, Cohen had to scramble to find two additional chairs. Fortunately, a waiter lives nearby.

“There’s a MacGyver component,’’ says Gilson. “Here’s a cafe with limited resources. See what you can do.’’ On this third night of his pop-up, Gilson’s menu is vegetarian. The third course is a creamy soup he calls parsnip and potato “latte,’’ served in a mug with a sprinkling of crushed chestnuts, thyme, and cocoa nibs. A vegetable and bean cassoulet, garnished with marjoram, has smoked mushrooms, which add intense flavor. Gilson manages to serve hot and cold courses from two induction burners, a portable griddle he bought at Target, and a soup warmer. “Taking the show on the road we need to be very prepared,’’ he says.

Gilson hopes to do a pop-up every month around town and ultimately would like to create a series at unexpected locations, each for 100 guests. “I want to change the way people dine,’’ he says. In that spirit he’s working on how to transform a hair salon into an eatery and possibly re-create a speakeasy.

The chef’s ultimate location is one our table never thought of: Diners would be seated along the baseball diamond at Fenway Park, with tables rounding each base, meeting at home plate.

Will Gilson is planning pop-ups around Valentine’s Day at Somerville’s Taza Chocolate factory. For more information, go to www.wheretoeat.in/taza.