Pop star for a night 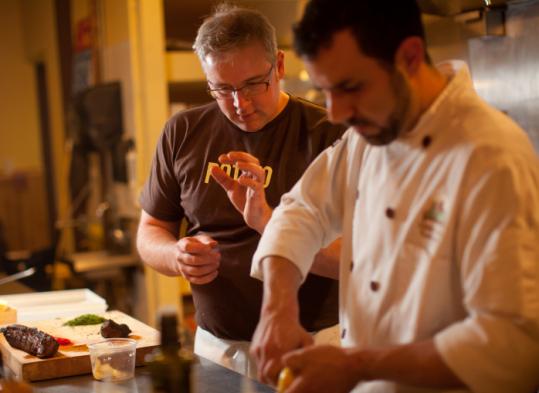 Robert Harris (left), chef and owner of Season to Taste, and Samuel D'Avignon, his executive chef, plate a meal at "The Lost Art of Braising" demonstration. (Erik Jacobs for The Boston Globe)
By Ike DeLorenzo Globe Correspondent / January 26, 2011

CAMBRIDGE — In many cities, chefs are cooking at so-called pop-up restaurants. They’re the adult and culinary redux of the rave parties of decades past. Now, a staff sets up shop for the night in an unlikely location — and makes dinner. Reservations are coveted. In Cambridge, a caterer has decided to use his own storefront during off hours to offer a kind of pop-up dinner and cooking class that is as much entertainment as dining. Aspiring attendees must monitor Twitter and Facebook to grab a seat when each event is announced.

And the seats are not cheap. Last week, at a fancy $100-a-plate menu with lesson, braising was the technique of the evening. The location was Season to Taste caterers, and guests sat at a single large table set up next to the open kitchen. The sparse room was filled with the gentle aromas of comfort food, and 10 diners. During the day, owner Robert Harris and his staff prepare food here for events. At night, it turns into the Table at a Season to Taste. Do the math and you see that 10 diners total $1,000, which is what you pay if you reserve the entire table for a group of friends or your own party.

Harris moved his catering company to an empty storefront space near Davis Square a little over year ago, with an eye toward hosting pop-up style events similar to those he had read about in Paris. He built the kitchen to accommodate such a setup.

Braising is an unusual method to celebrate. You might say that braising is to cooking techniques what street food is to restaurant menus. It’s humble, traditionally used for inferior cuts of meat to make them flavorful and, with time, fork-tender. Season to Taste chef Samuel D’Avignon’s menu includes braised beef, vegetables, even octopus, each course punctuated by stand-and-stir demos. The chef uses select cuts of high-quality, locally raised beef from Double J Farm in West Brookfield. The farmer who raised the cattle, James Talvy, and Andy Carbone, who works with him, attend the dinner and look on approvingly. This meat, Carbone explains, is “not just grass-finished, but purely grass fed.’’ As we chomp on samples of grilled tenderloin (a cut you would never braise), conversation at the table turns to other ways the animals were, and perhaps could be, pampered.

The old technique of braising is used in most of the world’s cuisines: Chinese (hot pot), French (coq au vin), Italian (chicken cacciatore), North Africa (tagines). And everywhere it’s essentially the same: Brown the meat or vegetables then slow-cook them, usually for hours, in a flavorful liquid. An acid such as wine and some salt help tenderize the pot.

Why browning adds so much flavor has, historically, been a matter of dispute, and is still a source of widespread misconception. It does not “seal in the juices,’’ as my mother — and probably yours — may have told you (the juices still wind up in the pan). Harold McGee, the food science writer, has been on a decades-long crusade to dispel this myth, reminding cooks that the browning is actually done to promote something called “the Malliard reaction,’’ which occurs when the amino acids and sugars in the food are heated together. The surface turns dark brown and becomes delicious. Scientists are still struggling to fully understand what the brown compounds are, and why they taste so good, but the prehistoric origins of the practice may indicate an evolutionary draw toward the cooked meat.

Once browned, the meat is almost submerged in liquid, which might be mild stock (chicken, vegetable), beer, wine, crushed tomatoes, or some combination of these, often diluted with water. The goal is to have something flavorful and slightly acidic. Such quirky additions as vinegar and are also effective acidifiers.

Braising allows you to frontload the Maillard reward, by browning the meat as much as your patience allows. Any over-browned parts soften up nicely in the liquid, and all those tasty brown compounds wind up in the cooking liquid and permeate the meat itself.

Every dish at the Seasons dinner comes with a side order of philosophy. Vegetables are delivered by bicycle (even in winter); waste is composted and recycled; carbon footprints of all ingredients are considered. It’s food for thought, and dinner conversation.

To braise octopus, D’Avignon reverses the usual steps. First he slow-cooks large tentacles in seasoned, diluted red wine, then browns them on the grill, so the surface is more appealing and tasty. Harris holds up a whole, thickly tentacled octopus. Suckers jiggle, diners giggle.

Grass-fed beef has a distinct and, for many, desirable animal flavor. It also has less fat, and less water content. Grilled and simply seasoned, a tender cut of Double J Farms beef is nothing short of fantastic. Braised, the subtleties of flavor diminish, and the texture is even a bit dry.

When a cut of meat has a lot of connective tissue, it’s a good candidate for braising. For beef, this includes chuck arm and shoulder, brisket, short ribs, blade roasts, round roasts, and shanks. After three to six hours in the oven, the meat reaches the point where the connective tissue breaks down, and the meat becomes quite tender. It’s done when it separates easily with a fork, yet is still moist. Lean cuts do not braise well.

Braising breaks down tough cellulose in vegetables, as the starches swell. Firm vegetables such as carrots work best. Time the addition of the ingredients (meat first, then firm vegetables, then softer vegetables) so they’re tender at the same time. To finish, strain the now collagen-rich liquid, skim it well, and reduce it in a saucepan for an incomparable jus or gravy. (Braises are often better the following day, and skim more easily when the fat solidifies.)

All this braising can be done at home easily. Your results might even be better. But the genius of alternative restaurants is a more complex recipe. Take one part local and organic ingredients, add a trendy pop-up dinner, a useful cooking demo, a guest star who happens to be a farmer, a handsome and entertaining staff, and one long table of diners thrilled to be in attendance. Except for the farmers and the staff, you could also do that at home.

The Table at a Season to Taste 2447 Massachusetts Ave., Cambridge, 617-826-9037, www.thetableatseasontotaste.blogspot.com; on Twitter at STTcatering.