Fish and chippiness are on the menu 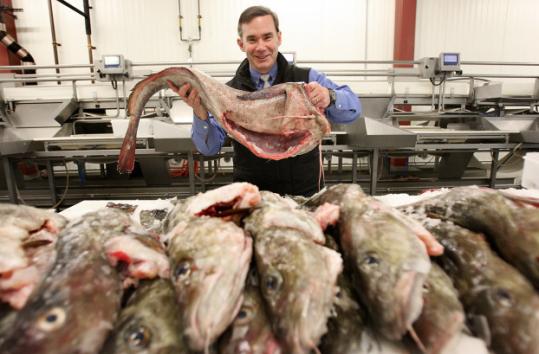 Guests attending a dinner Monday night at Legal Sea Foods in Park Square will sit down to a meal of black tiger shrimp, cod cheeks, and hake. Billed as a dinner of “blacklisted’’ fish, it’s designed to bring attention — in a provocative manner — to the ongoing debate over what constitutes sustainable seafood.

The dinner underscores the tensions between fishermen who believe regulations are too restrictive and conservationists who feel they don’t always go far enough. It’s a heated issue — at stake are people’s livelihoods and the viability of fish stocks — but now it comes with wine pairings.

That wording has drawn the attention of conservation groups, chefs, and consumers concerned about the environmental impact of their choices. To some, the invitation reads as though Berkowitz is thumbing his nose at the notion of sustainability.

“What [Berkowitz] has done with this so-called blacklisted fish dinner is very provocative,’’ said Melissa Kogut, executive director of Chefs Collaborative, which works with chefs to promote sustainable food and offers an online sustainable seafood training program. “I wish he did announce the dinner in a way that didn’t denigrate the really useful work of a lot of the ocean conservation groups out there but that really shed light on . . . how a particular seafood choice is sustainable. Legal Sea Foods is very well known and a large purveyor of seafood. What they say, people listen to.’’

Berkowitz said he simply wants people to take a more nuanced look at the issue.

“I can see people having a knee-jerk reaction: He just wants to sell more fish,’’ Berkowitz said. “I’m portrayed as greedy and exploitive, not taking a lead on the issue. But my goal is to educate chefs and restaurateurs about balancing the information they’re getting.’’

The Legal Sea Foods dinner — whose 55 attendees will include fishermen, chefs, marine scientists, writers, and people who are interested in food — offers species frequently included on conservation groups’ “avoid’’ lists. All appear on Legal’s menus, either regularly or as specials.

The shrimp being served are farmed in Vietnam, where that industry has been blamed for past mangrove destruction, pollution, and other ills. But Berkowitz said the industry has improved, and he has inspected the operations from which he buys.

Also being served are white hake and cod, species conservation organizations fear are being overfished. Legal Sea Foods will serve hook-caught hake and Gulf of Maine cod brought in by Gloucester day boats. Using smaller boats and hooks rather than methods such as dragging with nets lessens the environmental impact; serving cod cheeks uses a part of the fish’s head that might otherwise be discarded.

Tom Nies, senior analyst for the New England Fishery Management Council, said Gulf of Maine cod was not overfished as of 2007 (the most recent assessment data available), as it had been five years earlier. White hake, however, wasn’t rebounding as well.

“The stock was too low, meaning it was overfished, and we were taking too many out of the water, meaning we were overfishing,’’ he said. Still, his opinion is that hake is now being harvested in supportable amounts. “People should be willing to eat US-caught cod and white hake. These stocks are being managed well.’’

Too well, Berkowitz feels, and many fishermen agree with him. Current restrictions on fishing are “draconian’’ at a time when fish stocks are recovering, he said, hurting fishermen and driving day boats out of business. (A request made by Governor Deval Patrick for an emergency increase in catch limits for groundfishing vessels was denied by Commerce Secretary Gary Locke this month.)

The dinner has certainly drawn attention to the issue. The Gloucester Daily Times ran an editorial applauding Berkowitz, while conservationists and bloggers took him to task.

“This seems to be part of [a] troubling trend of cynics who say, ‘You can’t trust the hand-wringers,’ and ‘Forget the science — give me the last plate of bluefin,’ ’’ wrote one, Jacqueline Church, who organizes sustainable seafood events.

Many considered the use of the word blacklist, not commonly employed by conservation organizations, to be inflammatory. On the website Change.org, someone started a petition titled “Tell Legal Seafoods: Stop attacking sustainable seafood!’’ Chefs Collaborative took a more measured approach. The organization posted an open letter thanking Berkowitz for starting a dialogue about sustainable seafood.

It’s an issue on people’s minds. In a survey published last month by the food service magazine Nation’s Restaurant News, chefs named sustainability as a top trend for 2011. The word appears on menus all over Boston, as restaurants increasingly buy ingredients from local farmers and fishermen who favor low-impact methods.

Last year, created a color-coding system to rate its seafood’s sustainability. In the United Kingdom, top chefs champion sustainable seafood on a new television series called “The Big Fish Fight’’; since it aired this month, sales of more-sustainable fish such as sardines have soared in major supermarkets there.

And in the past decade, consumers concerned about eating sustainable fish have snapped up more than 36 million copies of a pocket guide created by the Monterey Bay Aquarium’s Seafood Watch program. Its iPhone app has been downloaded more than 426,000 times since 2009.

Berkowitz takes issue with tools such as the pocket guide. “It’s a mixed bag out there,’’ he said. “Am I a scientist? No. However, I do go after the facts in terms of what’s been printed and what’s been stated. I’m not listening to any one group. Ask people, ‘How can you say cod should be avoided?’ and they say, ‘It’s right here on the Seafood Watch list.’ It’s fostered a group of lemmings.’’

But Seafood Watch recently adjusted its ratings on that species, giving Gulf of Maine hook-and-line Atlantic cod — the kind Legal is serving at the dinner — a “Good Alternatives’’ ranking. The health of species is constantly changing. To make an informed decision about what fish to eat, one needs to know exactly where it comes from and how it was caught.

The guides are a useful starting point, based on information that comes directly from those managing fish stocks, said Seafood Watch director Jennifer Dianto Kemmerly.

“The consumer can only digest so much information,’’ she said. “Right now, the only information available to them is the country of origin and whether [the seafood is] farmed or wild. So we have to temper that reality with the information we put in our pocket guide, but we very well know and acknowledge that there are fisheries out there trying to do the right thing.’’

If there’s one thing everyone can agree on, it’s that sustainability is a complicated issue.

“There’s a very complex calculus that goes on every morning between 8 and 9 when I speak to my fish guy,’’ said Michael Leviton, chef-owner of Newton restaurant Lumiere and a board member of Chefs Collaborative. “What do I know about the boat this fish came off of? I want to know how they’re fishing, the size of the boat, whether they’re hooking or gill netting or dragging. And it has to be the best possible fish.’’