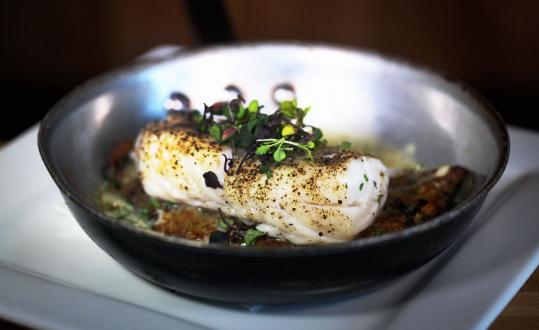 At the bar, several blind dates are being made less awkward by flattering lighting. Several bad days are being soothed by Scotch. Four women with white bobs and dangling earrings sit down at a table, peeling off thick wool coats and smiling lipsticked smiles at one another. Two young couples reminisce about their law school days and hotly debate a current issue: the best way to find a good nanny. “The bison Bolognese!’’ bellows one man. “I had that once! It was like, whoa!’’

The Abbey offers comfort for all. Outside, it’s a cold night. Here’s a small space, brick walls holding a bar and a few tables, where anyone can come, eat, drink, be. Chef Josh Sherman is back in the open kitchen, cooking up that bison Bolognese, his tattooed arms all one can see of him as he passes the plate to a waitress in the dim light. (The Abbey has finally solved the problem of how to read menus in the dark — by printing them on translucent paper and providing candles to illuminate them from behind. Brilliant!) Damian Dowling is manning the bar, pouring proper pints and guiding guests through an extensive list of Scotch, Irish whiskey, and single-barrel bourbon. The two opened the Abbey with Gina Medaglia, who ran Dalia’s Bistro and Wine Bar, which formerly occupied this space. It’s just down the road from the Washington Square Tavern, where Sherman and Dowling worked before opening the Abbey at the end of September. It’s named for the national theater of Ireland; also, says Dowling by phone, “an abbey is a sanctuary where you can think and relax.’’

It’s often necessary to wait for a seat, and not just because the place is small (about 30 seats, with a few more outdoors once the weather warms up). The food and the prices are as comfortable as the atmosphere. Nothing costs more than $20. The food is satisfying; it’s not too heavy, overly salted, or trendy. It’s simply good, the kind of fare you are happy to eat several times a month with your friends and neighbors.

There are small plates — deviled eggs, crisp cod fritters with spicy tartar sauce, fried halloumi cheese with yogurt. These snacks lend a bit of sustenance while you get to the more serious business at hand, jawing and perhaps drinking a bit. Truffle fries with roasted garlic mayonnaise also do this job nicely; you’ll find them filed under “sides,’’ with healthier companions such as shredded Brussels sprouts and hoisin BBQ broccoli.

Appetizers offer more substance. Duck confit soup is a strange brew. It tastes more like beef, and the promised flavors of lemongrass and ginger are hard to discern. Caesar salad — a dish that should always be great but rarely is — deserves much love here. It’s a wedge of iceberg that has been grilled, the charred flavor adding dimension to the crisp barely-a-vegetable quality of the lettuce. It’s decorated simply, with croutons and good dressing that’s made in house, as are all the sauces here. Over the salad are draped four plump white anchovies, salty and mild and lush. Anyone who thinks they don’t like anchovies should try these and reconsider.

Mussels of average quality are served in generous quantity, heaped with a pile of golden-brown fries in a creamy broth of white wine, garlic, and plenty of herbs. This appetizer could be dinner, particularly if you ask for bread to dip in the sauce. (The bread here comes with hummus that is excellent one night, too heavy on sesame another.)

Entrees start off simple, with a grilled cheeseburger and fries — your choice of Swiss, blue, or cheddar. The half-pounder is thick, deeply charred on the outside, and juicy. It is a basic burger executed with skill.

Sherman was known for this burger at Washington Square Tavern, where his bison Bolognese also became a cult dish. It’s not a proper Bolognese, but more of a meat sauce with tomato paste, carrots, and onions, plus an oddly sweet flavor in the background from red bell peppers and parsnips. The ground bison is hearty and spicy, and the meat is tossed with fresh linguine (pasta is procured daily from Capone Foods).

Even better is a dish of roasted cod, served still in the skillet. The fish is simple, cooked with plenty of herbs, atop a potato-scallion pancake in a shallot cream sauce. Eating it is an honest pleasure, derived from clean, hearty flavors, from the fact that the cod is perfectly seasoned and not one second overcooked.

Also in a skillet one night is a special of truffle macaroni and cheese with peas and ham, crowned in golden-bread crumbs. A blend of cheddar, mozzarella, and pecorino gets an added kick of salt from the crisp chunks of pork, and an occasional pea surfaces to remind you that vegetables exist. The dish wears a bit too much truffle oil perfume, the only thing interfering with its creamy decadence.

Not everything on the menu is as winning. For example, coq au vin, a dark brown stew of bird and mushrooms that’s tasty but looks a mess. And grilled flatbread pizza topped with pepperoni and banana peppers would be great after a few drinks, but less so beforehand — the crust is thick and doughy.

There is no dessert at the Abbey. There doesn’t need to be. There are plenty of places nearby to satiate a sweet tooth, from Athan’s bakery to Emack & Bolio’s. There aren’t, however, plenty of places serving food late. The Abbey feeds Washington Square until 1:30 a.m., to the gratitude of restaurant industry compatriots and the area’s many doctors. It also offers a wide selection of spirits, many from smaller distilleries; cocktails for $10; about 60 kinds of beer, with an emphasis on local breweries; and a short list of food-friendly, bargain-oriented wine.

The Abbey is the kind of place everyone wants nearby, a comfortable nook with good food and good prices. It’s the kind of place that makes one corner of the city feel like a neighborhood, where there’s room for anyone, provided they’re willing to wait for a seat.