Shellfish fans, your ship has come in 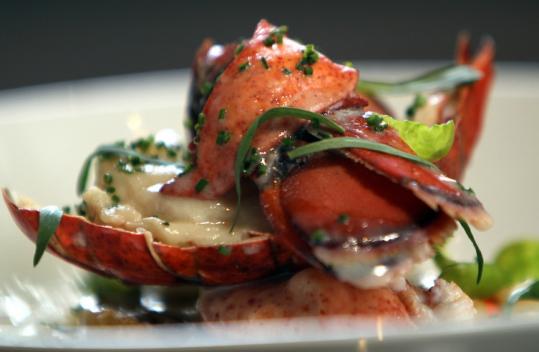 Skip Bennett and his crew at Island Creek Oysters have been cultivating excellent shellfish in Duxbury for nearly 20 years now. If you’ve ever eaten oysters in a local restaurant, chances are you’ve eaten Island Creeks.

That reputation is what’s bringing diners to the new Island Creek Oyster Bar. But the restaurant is here to do more than showcase its namesake bivalves. It is indoctrinating people into the cult of oysters. Along with the food, the owners offer a glimpse of what it is to make a living on the water. In addition to Bennett, they include chef Jeremy Sewall of Lineage and Garrett Harker, whose ever-popular Eastern Standard is located next door. Also on board are general manager Tom Schlesinger-Guidelli, well known from his time crafting drinks at Craigie on Main, and classic-cocktail guru Jackson Cannon as bar director. It’s a strong team.

The Kenmore Square restaurant is filled with sleek blondes in black dresses, chiseled men in sport coats, carefully disheveled hipsters. The crowd has the attractive gloss of a stock photo. The interior of the restaurant, opened in October, is inspired by the sea. Weathered gray boards hang on the walls like docks defying gravity. One wall is composed entirely of oyster shells contained by wire mesh. A vast photograph of Duxbury Bay hangs on another, enlarged to the point of abstraction. At the center of everything is a bar, where oysters, lobsters, and shrimp beckon come-hither from their bed of ice.

Island Creek Oyster Bar offers oysters from all over, including varieties hard to come by in these parts. In addition to Island Creeks, there are Peter’s Points and Moon Shoals, Hog Islands and Hama Hamas. The menu lists their origins and the names of those who grew them. Other offerings include South Shore clams, cod and whiting and dorade, and “Cousin Mark’s’’ lobster from Bar Harbor, Maine. (Lobsterman Mark Sewall is Jeremy Sewall’s cousin.) Here, the menu tells us how they were caught (Island Creek is focused on low-impact methods) and the names of the boats that brought them in. Not every item at Island Creek Oyster Bar is seafood, but this is a seafood restaurant, the kind that automatically goes to the top of the list of places to take out-of-towners seeking something more stylish than Legal.

That raw bar is the restaurant’s greatest strength. Offerings shift from night to night, depending on what’s come in. Oysters are heavenly, from the cucumber-inflected Shigoku in its deep-cupped shell to the brawny, metallic wild Belon. In addition, one finds the likes of littlenecks and grilled razor clams with chili flakes and kumquat. As wonderful as these razor clams sound, I never get to eat them; when they’re out, they’re out. It’s an argument to come earlier in the evening, before the more-tantalizing dishes are gone. Servers are well versed in the many offerings and generous with advice.

A shellfish platter for four makes an impressive splurge. (It’s $88, and the only size offered. A platter for two would be a welcome addition.) It’s laden with oysters, lobster, shrimp, and a bland fluke ceviche. Mignonette is classic, but the cocktail sauce is sweet like relish, lacking the bracing horseradish bite that is the point of the condiment.

Oysters aren’t always served raw. In sliders, they’re fried morsels on brioche rolls with lime and chili aioli, a great little snack unless you want to taste the oyster-ness of the oysters. The frying overwhelms their delicate flavor. Oysters Gregory features bivalves topped with Parmesan, bacon, charred leeks, and paprika — a retro delight, but again, it takes the focus away from the main ingredient.

This oyster bar has also mastered the clam. It offers a real contender for best local chowder. Buttery, with good clam flavor and chunks of bacon, it’s just thick enough. And it nails fried clams, which are the simple pleasure they ought to be: light, greaseless, pleasantly chewy, with well-made tartar sauce.

Ethel’s lobster roll ought to be a slam-dunk, as well. (Ethel is Sewall’s grandmother. Like boats, dishes here are often named for women.) The sandwich is filled with plenty of lobster salad, perked up with chopped pickle but not overly gussied. But the roll is too hefty and overburdened with rosemary; despite its substance, it gives way entirely in my hand, leaving me showered in mayonnaise and lobster meat. A toasted, buttered hot dog roll never treated me this way.

Sewall’s menu features more-creative dishes alongside the classics. Preshelled mussels come with a thin, mild yellow curry sauce, Israeli couscous, and grilled onions; it would be a lovely dish if the mussels weren’t so terribly gritty. Crispy cod cheeks look like fish nuggets; they’re nicely fried, but the green tomato relish with which they’re served needs seasoning. Flavors here tend to be even-keeled, oriented toward comfort and satisfaction more than brightness and contrast. This makes raw bar dishes and appetizers more successful than entrees, which can seem like too much of the same after a few bites.

Nonetheless, there are good ones. Mrs. Bennett’s seafood casserole is named for Skip’s mom, who appears to be a mean cook. It includes generous pieces of lobster, scallops, and fish, topped with bread crumbs and baked in a bubbling red broth with a flavor akin to bouillabaisse. It’s oversalted, however. Another night, a whole bass with crisp skin and tender flesh sits atop buckwheat noodles in a lobster broth with a similar flavor. Nantucket Bay scallops and pancetta round it out.

Lobster comes in many forms here. A “baked stuffed’’ 1 1/2 pounder isn’t traditionally stuffed. Rather, it sits atop stuffing and root vegetables, turkey of the sea. Lobster roe is made into pasta, the noodles taking on its coral hue. They’re tossed with grilled lobster, chunks of tender short rib, and butternut squash. It’s a unique take on surf and turf.

Dessert is geared toward comfort, too. Chocolate pudding has a rich, deep flavor and the texture of mousse. Even better are cider doughnuts, fried and showered in sugar, with caramel sauce for dipping.

The cocktail list is short and sweet. The Snug Harbor smash, featuring several kinds of rum, lime, and Demerara sugar, is particularly well balanced. The beer list ranges from ICOB pilsner (created for the oyster bar) and Duvel Green on tap to bottles from Belgium, Germany, and beyond. White wines work best with this food, and there are plenty of Alsatians and Austrians, and even a Greek blend. Each night brings wine specials, often available only by the bottle, disappointing when one wants to try just a glass of something new.

The sommelier is as enthusiastic and helpful as the servers. Confusion reigns, however, when it comes to seating. One visit, we wait for a table for an hour when there are empty spots visible from our awkward vantage point in the middle of the room. Then we’re offered a table that’s been open the whole time. Another evening, we overhear several parties complaining about later arrivals getting seated first.

Even so, Island Creek Oyster Bar is one of the best places in town for oysters, chowder, and a deeper taste of the sea. Knowing the names of those who grow and catch our seafood; the sweet, girlish appellations they give their boats; and how and where they fish connects us to their livelihoods and to our plates. There is something visceral about the sea, and something uniquely New England about earning a living on it. Restaurants have made “farm to table’’ a mantra. Island Creek now does the same for ocean-to-table dining.