Red, black, and bustling at Cabot's 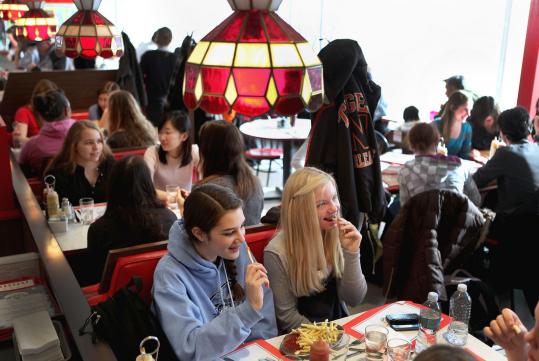 A friend informs me that all through college she showed up with a gaggle of people late at night in various forms of intoxication to eat the fabulous ice cream at Cabot’s. Another stopped by for years after church on Sunday. A third gets a regular report from her mother, who dines there almost every week with three other octogenarians before they all head to the movies. Drive by the picture windows and the place is full from breakfast until late at night.

We are sitting in a booth admiring a “wow’’ burger ($5.19), which consists of a buttery, grilled American cheese sandwich with a juicy burger tucked inside (known elsewhere as a patty melt). A friend texts, asking where I am. When I tell her, she texts back, “I love Cabot’s!!’’

Well, you can’t help but love Cabot’s. It’s a cross between Friendly’s and , with enough red decor to drown out the most garish Christmas decorations. Tiffany-style red and yellow glass pendant lamps hang in the room. Booth seats are covered in red leatherette. Counters are black slate lookalike. Waitresses match the room. They’re in very short, tight black skirts (where on earth do they buy them?) with short-sleeved white shirts and red aprons. Even the food keeps to the color theme. A waitress at the center ice cream island is ladling some exceptionally bright red berry sauce onto waffles, then adding a 2-inch-thick cuff of whipped cream.

Joe Prestejohn owns Cabot’s with his sister, Sue Lipsky. They’re the son and daughter of founders Catherine and the late Joseph Prestejohn. The senior Prestejohns began the business in 1969, naming it for the Cabot area in Newtonville. Catherine, 87, still works at the shop. Joe’s wife, Carol, and their daughters, Katelyn, 25, and Danielle, 23, and Sue’s son Eric, 23, are all there, and have been since they were young. Young means 11 years old, which is the age Joe was when he started.

At breakfast one morning, a western omelet ($5.99) would be great if the onions didn’t taste steamed. Pan-browned corned beef hash (6.59) is delightfully crusty and the kitchen poaches eggs (thank you!), though they should have softer yolks.

Grilled Reuben ($7.99) is just the way I like it: with lean corned beef, along with sauerkraut and Swiss. But Russian dressing comes in a plastic packet, rather than tucked between the slices of rye. Chicken fingers ($7.99) are huge, juicy nuggets of breast tenderloin strips, along with crisp thin fries. An all-white-meat turkey dinner ($7.99) is a delicious bargain, with good gravy, nice mashed, but stuffing that tastes like a mix.

You have to stare at the ice cream menu in order to decide. All the frozen scoops come from Richardson’s Ice Cream of Middleton and Reading, which is one of the best local brands. If you’re looking for something to slurp, get a frappe ($4.39), which contains syrup, ice cream, and milk. (“The rest of the country calls them shakes,’’ Joe Prestejohn tells me.) Chocolate malted is exceptional. Sundaes ($4.29 and $5.29) come with butter fudge (regular fudge), mellow cream (milk chocolate), bittersweet (semisweet) sauces. And there’s much more: cones, frozen yogurt, floats, puffs, brownies, shortcake, parfaits, waffles, banana boats.

The place seats 85; with college kids home and hungry for the haunts of their youth, Cabot’s might serve a couple hundred a day. “The holidays are a good time of year,’’ says Prestejohn. When the snow and ice come, the spot slows down a little. When the sun shines and it’s real chilly but bright, New Englanders eat ice cream, and everyone within driving distance flocks to Cabot’s. They have for the last 41 years.