Fit for the Square

Foundry’s atmosphere, menu are right at home in Somerville 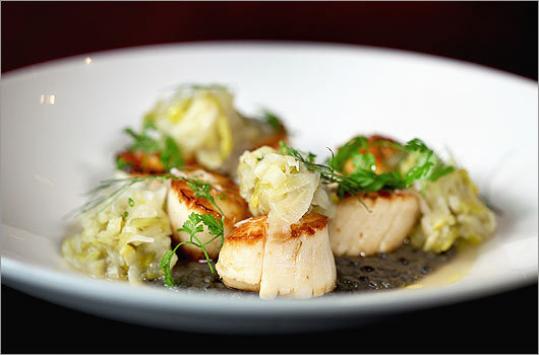 It’s hard to believe a place like Foundry on Elm didn’t already exist in Davis Square. Opened in September, the restaurant is of the brasserie-gastropub ilk Americans haven’t yet coined our own term for. You know it when you see it: It’s got a long marble bar, plenty of mirrors, red leather booths, and a black-and-white checked floor. It’s big and loud and convivial and comfortably priced, and when friends wonder, “Where should we all get together?’’ it’s the kind of place everyone can agree on.

We have our share of restaurants like this in Boston, and two people involved with several popular examples — the Independent, Temple Bar, Brasserie Jo — founded Foundry on Elm. It’s no surprise, then, that co-owners Ken Kelly and David Flanagan know what they’re doing.

First, they hired chef Sam Putnam, formerly of Ashmont Grill. If you know what a brasserie looks like, you can also imagine its menu. Putnam did, then he threw half of it out the window. His roster of dishes includes house-made charcuterie, oysters, tuna Nicoise, and steak frites, to be sure. But Putnam breaks the bistro mold with spaetzle, Middle Eastern meze, and shrimp etouffee. (And poutine, but I’m pretty sure Quebec’s fries-with-gravy dish is now mandatory for any new area menu.)

Then they promised “proper ale’’ along with the “fine food,’’ both terms emblazoned right on the front of the building. There’s a rotating cask selection, a generous roster of bottles and cans, and 32 taps dispensing everything from Sam Adams to the spicy, fruity Schneider Aventinus. The wine list is reasonable and showcases bottles that aren’t the usual suspects. Managing the cocktail program is Andy Kilgore, who has spent time at Stoddard’s and No. 9 Park. He offers classic Sazeracs and Seelbachs, plus riffs such as the lovely Craddock’s Tonic (Bols Genever, Lillet blanc, and fresh citrus).

They created a space that’s comfortably stylish, if a little shiny and new. It’ll break in, because even though it is vast, it is always busy, from the bar at the front to the banquettes at back. Children are here with their parents. Young professionals come in droves. Distinguished gray-haired gents wine and dine their distinguished gray-haired wives. It’s an all-ages show.

The location and the atmosphere (and the beer) draw people in. But it’s the food at Foundry that has made it, already, a neighborhood mainstay. Although the restaurant’s name casts it as a shop where raw ingredients are forged, it’s not the kind of place that lists every farmer on the menu. Reading it, you wouldn’t know that much of the produce is local, the seafood largely from Gloucester, Duxbury, and Rhode Island. Dishes are quietly seasonal and speak for themselves.

It doesn’t get any simpler than roast half chicken, for instance. The bird is juicy, it’s flavorful, and it’s served with fingerling potatoes and kale. A salad features wedges of golden beets, roasted and set in a ring around a bed of arugula with goat cheese, pine nuts, and a sprinkle of lemon juice and olive oil. Exciting they’re not, but these dishes are satisfying and well executed, like home cooking you didn’t cook at home. (You would never make your chicken and potatoes this salty, though. Foundry’s dishes can be overseasoned.)

A charcuterie plate features excellent house-made pates of silky chicken liver, mild pheasant, and more. They come with a silver cup of pungent farmstand pickles, also made in house. A meze plate is not quite as good but is a welcome meatless offering, with hummus, olives, pita, and an amended tzatziki made with shredded beets.

There are several flatbreads; one topped with mushrooms and Taleggio is stupendously delicious. The fragrance of stinky cheese and mellow roasted garlic wafts up with each bite.

Poutine is taking over as Boston’s dish du jour, and the version here is excellent, crisp fries with pepper-laden beef gravy and melting cheddar cheese curds. Spaetzle may be a future dish du jour — the chewy, irregular little dumplings are a satisfying stand-in for yesterday’s mac and cheese. Here, they meld with smoky ham, mushrooms, hazelnuts, and Comte. The dish looks a mess, but it tastes great.

Other entrees are more sophisticated. A dish of seared scallops sings with clean flavors. Tender ribbons of fennel and leek are piled around the shellfish, and underneath is a bed of lentils. Preserved lemon perfumes the plate. Pan-roasted monkfish is served with turnip puree, braised greens, and warm bacon vinaigrette — fish can be comfort food, too.

Foundry on Elm isn’t without disappointments. Calamari isn’t fried long enough, easy to tell from the pale batter. A croque monsieur is dry where it shouldn’t be. An entree of acorn squash stuffed with bulgur, Swiss chard, feta, and walnuts is also dry. “It just needs sauce,’’ a vegetarian diner keeps saying, shaking his head sadly. (There are other meatless entrees, but they all contain eggplant, which is unfortunate if you happen to be an anti-aubergine vegetarian.) And shrimp etouffee doesn’t taste like any etouffee I’ve had before; the stew is light on shrimp and padded out with leaden hushpuppies.

Some may find the noise level in the restaurant unpleasant — it’s loud enough that the attentive servers sometimes find it hard to hear you. (They just keep smiling and pouring water in case you need it. You will not leave dehydrated.)

But Foundry on Elm is a natural in Davis Square. That, it seems from the crowds, is something everyone can agree on.

Noise level Conversation can be difficult.