Super dishes in place of superstition

Deuxave sets its ambitions for the top 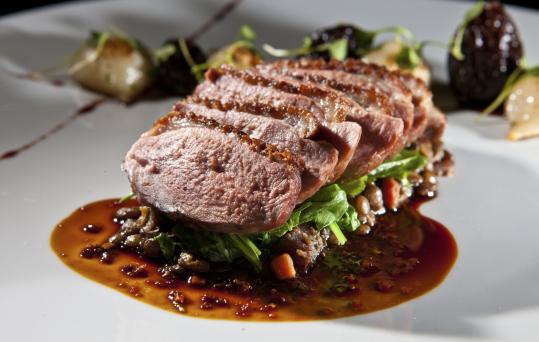 Everyone told chef Christopher Coombs this space was cursed. It was Panificio once, and not for long. For stretches it was vacant. Coombs doesn’t believe in the lasting power of curses. He grew up in Massachusetts.

He and co-owner Brian Piccini opened Deuxave at the intersection of Commonwealth and Mass. Ave. in early September. (It’s pronounced “Dooh-ahhv,’’ with a silent “x,’’ a French-esque name inspired by the location.) The place is redone in sophisticated dark gray, with outsize chandeliers, stone and brick walls, and a merrily blazing gas fireplace. Up front, there’s a sleek marble bar and curved banquette seating set against floor-to-ceiling windows. They do believe in good design.

On a recent evening at the bar, an expense accounter is foisting carpaccio on a colleague. “You have to taste this food,’’ he says. “It’s as good as Mistral!’’ Beside them sits a regular, eating solo with a magazine in his new canteen. Coombs says he wants Deuxave to fill a void for residents looking for less-expensive options than, say, Clio. “We aim to be the Oleana or Craigie on Main of Back Bay,’’ he told the Globe in June.

Sound ambitious? You may know Coombs from Dorchester’s dbar, his first venture with Piccini, where he serves upscale comfort food. Or you may know him from TV — he was a contestant on the Food Network show “Chopped.’’ Before that, he was at Troquet, Aujourd’hui, the Inn at Little Washington in Virginia, Nantucket’s Topper’s at the Wauwinet, and Blue Ginger. Somewhere in there, he went to the Culinary Institute of America. He is 26. Yes, he is ambitious, and his dishes show it.

Is there a better canvas for culinary ambition than duck? So much can be done with a bird. At Deuxave, they butcher them in house — 10 cases a week, Coombs says later by phone. They use every bit. Necks and giblets are roasted for stock, fat is rendered for frying. The legs become confit you dream about, served in duck jus enriched with the birds’ livers, along with white beans, cranberry coulis, and herb salad.

The breast becomes Deuxave’s best dish, with ingredients perfectly prepared and flavors perfectly balanced. Tender slices crusted in Persian spices are served with honey-glazed baby turnips, sauteed arugula, and lentils du Puy, cooked low and slow with pancetta, red wine, and herbs. Because one sauce is not enough, the plate features both a prune Port gastrique and the mustard-based sauce Robert. (A previous iteration of the dish, with lentils, wild mushrooms, gingery spinach, turnips, poached peaches, and sherry-mustard sauce was also excellent.) Coombs often describes dishes in language as cryptic as it is evocative. The duck comes with “French kisses.’’ These do not involve your server. Please don’t try it. They are Port-soaked prunes stuffed with foie gras mousse. The moment you share with them is meaningful.

An appetizer described as “Night Moves’’ Scituate lobster with gnocchi is delicate and unusual. It comes with an unfortunate side effect: Your entire table is likely to launch into an off-key Bob Seger chorus. Our waiter tells us it’s named for the boat that brings this lobster to shore. Shortly after its arrival, it’s making its way onto this plate, along with earthy little gnocchi, green grapes, generously scattered mushrooms, curried walnuts, and pearl onions, with citrus and herbs. (Coombs loves mushrooms, an enthusiasm he wants you to share — one evening, they appear in nearly every dish we order. He forages them himself when he has time, he says later.) More lobster on the plate would be lovely, but the dish is welcome for its unexpected flavors. And in the unlikely event a server should try to clear the plate before you’re done, you get the satisfaction of telling him you’re still working on your “Night Moves.’’

Coombs describes his approach to flavor combinations in nearly mystic terms. “If I think three parts grapefruit, one part orange, lemon, tarragon, and potato, built in with the brininess of lobster, I have the ability to imagine how that tastes on my tongue. I can imagine flavors and interactions and create what I’m envisioning. From the time I was 12, I felt like this is what I was supposed to do.’’

His intuition is often, but not always, right. His roster of ingredients can be head-spinning, sound and fury signifying somewhat less than one would hope. Hawaiian tuna is crusted in pink peppercorns, seared, and served in crimson slices: straightforward. Also on the plate are pork belly, sea beans, radish, cucumber, pineapple and rice wine vinegar aigre-doux, lobster red curry emulsion, a scattered bouquet of tiny flowers, and “Asian flavors’’ (namely mirin and soy). The salinity of the delicate sea beans and the pineapple work well with the meaty fish. The crisp pork belly is almost overkill. “Most people don’t eat it,’’ our waiter tells us one evening. People don’t often pass up pork belly. Here, with the fish, it’s too much.

A dish of seared diver scallops comes across the same way, the subtle shellfish thrown into a maelstrom of potato rosti, dill creme, leek and parsley fondue, lardons, roasted tomato confit, shaved black truffles, gingered cumin carrot emulsion, and lemon-vodka syrup. Coombs is the Taste Whisperer. But sometimes his concepts are hard to comprehend, like a mathematician’s attempt to explain simple addition.

Even so, he executes basics with brilliance. His nine-hour French onion soup is nine times better than your average crock. The broth is an intense reduction of caramelized onions, enhanced by a bone marrow crouton, married to a thick, gooey layer of Comte. His version of tagliatelle Bolognese includes tomatoes, as well as veal, beef, pancetta, and foie gras. His fries are divine, as they should be for $9. Some dishes split the difference between comfort and style: a simply beautiful salad of fall vegetables, set fancily in a basket made of potato; a duet of beef tartare and Wagyu carpaccio with quail egg yolk and chanterelle escabeche; prime aged New York strip with baby carrots, crispy wild mushrooms, goat cheese and potato croquette, and a double whammy of garlic soubise and sauce Bordelaise.

There are no tablecloths at Deuxave. Servers serve, and sometimes schmooze. They don’t fuss or fawn. The restaurant signifies its fine-dining intentions in other ways: fresh flowers, Echire butter with your bread, mignardises. And, more significant, it does so with wine and dessert.

Jason Irving is general manager and sommelier. Formerly the wine director at the Four Seasons, he is a walking dictionary of knowledge. He shares it with enthusiasm, explicating joyously on the inexpensive bottles he feels will pair well with both your beef and your pal’s halibut. The wine list comprises more than 250 bottles, with a French slant and a wide range of price points. Deuxave has a 4,000-bottle wine cellar.

For restaurateurs who feel a good pastry chef is an expense they can’t afford, I sympathize, but come here to remember what a difference it makes. Olivier Maillard has worked for Alain Ducasse, Joel Robuchon, and Barbara Lynch, among others. When he serves cheesecake, it’s made of lime-infused ricotta, light and tart, beautifully plated with strawberry sorbet, strawberries, herbs, and flowers. When he turns his eye toward New England fall, it means a poached apple in a bowl of hot cider, a scoop of tangy creme fraiche sorbet perched on the lip with three caramel-filled doughnut holes (problematic when four people are sharing). Maillard’s desserts are, as they’re meant to be, the cherry on top of a meal at Deuxave.

On a recent weeknight, we notice Coombs surveying the half-full dining room with concern. Then his expression softens. “Every day here is a good day,’’ he says with zeal to the co-worker beside him. He doesn’t believe in curses. You make your own luck.