THIS STORY HAS BEEN FORMATTED FOR EASY PRINTING
The food issue

10 Boston restaurants richly influenced the last decade’s dining out – and now they’re shaping this one, too. 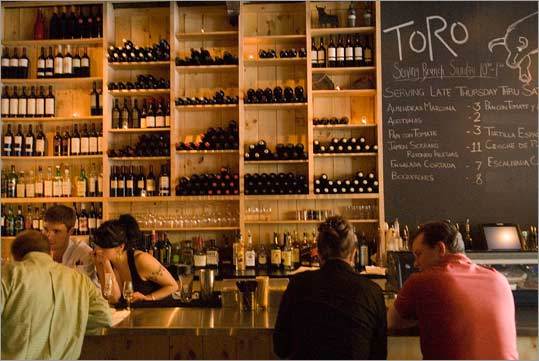 "It's hard to remember that 1999 wasn't all caviar and foie gras,” wrote then restaurant critic Alison Arnett in the Boston Globe a decade ago, reflecting on the state of local dining at the time. At the end of 2010, it's hard to remember that restaurants were that way at all. These days, we eschew excess for high-quality ingredients prepared simply, the dishes of our childhood given a twist, the carrot grown a few miles away by a farmer we've met. How did we get from there to here? The same way we get anywhere: on the shoulders of giants. The restaurants of the last decade shape the way we will eat in this one. Here are 10 of the most influential.

The first Anna's opened in 1995, but the last decade saw its destiny manifest. Now there are two locations in Brookline, two in Cambridge, one in Somerville, and one on Beacon Hill. Chances are more will follow – wherever Anna's goes, hungry hordes follow. Local restaurant entrepreneurs have taken note, and burrito joints have beset Boston, particularly Anna's birthplace of Brookline, which could now nearly qualify as the Mission East. 1412 Beacon Street, Brookline, 617-739-7300, http://www.annastaqueria.com

Chris Douglass was already the chef-owner of the South End's Icarus, one of Boston's premier fine-dining spots when, in 2005, he opened a casual and fun restaurant in his own neighborhood. The prices were reasonable, the food was relaxed, and Dorchester rejoiced. Who could have foreseen that in 2010, Icarus would be history and Ashmont Grill still going strong? Perhaps Douglass. He predicted the increased importance of the neighborhood restaurant and the rise of upscale comfort food in one fell swoop. Now countless high-end local restaurants all around Boston have reinvented themselves as more casual, more affordable dining destinations. 555 Talbot Avenue, Dorchester, 617-825-4300, http://www.ashmontgrill.com

Perhaps you've heard of food trucks? Just kidding – of course you've heard of food trucks. A utilitarian concept reinvented for foodie tastes, recently gourmet vehicles have taken off. This early adopter opened in 2008 serving local, fresh, often organic vegetarian fare at MIT in Cambridge and now also operates in Dewey Square (the corner of Summer Street and Atlantic Avenue) in Boston. Since Clover has proved you don't even need to have a restaurant to be a restaurant, it's reverse-engineering itself as a brick-and-mortar spot, to open soon in Harvard Square. When someone has Mayor Menino eating soy BLTs, you know they're on to something good. 20 Carleton Street, Cambridge, and Dewey Square, Boston, http://www.cloverfoodlab.com

When Tony Maws opened Craigie Street Bistrot in a basement near Harvard Square in 2002, he was one of the few local chefs who let the market dictate what would be on his menu each evening. If it was available and beautiful, he would buy it and cook it. His rustic French fare featured pig's tails and cockscombs and other parts more commonly discarded in high-end kitchens at the time. Since then, "local,” "market-driven,” and "nose-to-tail” have become buzzwords in Boston dining. And Maws now runs Craigie on Main, a bigger, above-ground version of the same restaurant. Pig's head, charcuterie, and seasonal ingredients are still among the main attractions here, but now you'll find them in many other restaurants around town, too. 853 Main Street, Cambridge, 617-497-5511, http://www.craigieonmain.com

Barbara Lynch has brought all kinds of interesting ideas to the forefront of Boston's restaurant scene. (A butcher shop/wine bar? But of course.) Bespoke drinks may have been the most brilliant – each made to order according to its recipient's taste and mood. You like gin and want something made with fresh herbs? Here, try this. Yes, Drink is mostly a bar, although it serves a rotating menu of canapes. Still, it's a bar that treats cocktails with more care than some restaurants treat food. Lynch began to elevate mixology at No. 9 Park, and Eastern Standard and others followed suit. But it's here that the craft cocktail truly achieves primacy in Boston. Before, we wanted to sip something well made off the rack. Now we want our drinks tailored. 348 Congress Street, Boston, 617-695-1806, http://www.drinkfortpoint.com

A Chestnut Hill steakhouse influential? Yes. The Metropolitan Club opened at the tail end of 2004, a modern-feeling place with a stylish vibe and just-creative-enough side dishes, cuts, and preparations. A few years later, everyone from Ken Oringer to Jamie Mammano to Pino Maffeo was doing the same. In 2007, just as the economy was starting to show signs of distress, the Met Club spawned Met Bar & Grill – a Natick spinoff that featured a gourmet burger bar. A Dedham location followed. Suburban residents swarmed. Now owner Kathy Trustman is launching Met Back Bay on a Newbury Street corner. The restaurant features classic cocktails with hand-chipped ice, a ham and cheese bar, and a private lounge with a membership fee. Given Trustman's one-step-ahead modus operandi, this could be a very good sign for the city. 1210 Boylston Street, Chestnut Hill, 617-731-0600, http://www.metclubandbar.com

This is the great little seafood restaurant the likes of which should be all over Boston – that's what we're famous for, after all. This North End jewel offers sparklingly fresh oysters, inventive crudi, some of the best lobster rolls in the city, and more. Since Great Bay's closing, it's the reference point for seafood, along with Legal Sea Foods. There should be more places like it, and there are starting to be, with the new Island Creek Oyster Bar and the Citizen Public House & Oyster Bar. May they be the first of many under the influence of Neptune. 63 Salem Street, Boston, 617-742-3474, http://www.neptune-oyster.com

Ana Sortun opened this restaurant in 2001, using local ingredients to paint a flavor portrait of a part of the world far, far away from the Cambridge restaurant. She gives diners a taste of haloumi and tahini, za'atar and dukkah, and more in her inventive versions of traditional Eastern Mediterranean dishes. Yet her carrots and kale and garlic are grown less than 25 miles away, at Sudbury's Siena Farms, owned by Sortun's husband, Chris Kurth. Farm-to-table dining is becoming ever more popular, with chefs such as L'Espalier's Frank McClelland and dbar's Chris Coombs starting up their own farms and growing rooftop gardens. Sortun's been at it for almost a decade. 134 Hampshire Street, Cambridge, 617-661-0505, http://www.oleanarestaurant.com

O Ya's influence is more symbolic than practical. The tiny temple to Japanese dishes raw and cooked shows that Bostonians are eager for options beyond meat and potatoes, that we eat to be delighted as well as to get full. It shows that we are willing to pay for expensive food in a setting that is more streamlined and minimal than the city's usual high-price-tag spots. And in capturing the imagination of former New York Times restaurant critic Frank Bruni, who in 2008 named it the country's most intriguing new restaurant (outside of New York, of course), it shows Boston restaurateurs and patrons that our city is growing into a dining destination. 9 East Street, Boston, 617-654-9900, http://www.oyarestaurantboston.com

At Ken Oringer's South End restaurant, everyone went crazy for tapas. Grilled corn slathered in cotija cheese, aioli, lime, and espelette pepper, dates stuffed with blue cheese and almonds and wrapped in ham, head cheese, Kobe sliders, and churros. If it doesn't all sound authentically Spanish, that's because what everyone really went crazy for was sharing these scaled-down dishes. Toro represents the Rubicon for small-plates dining in Boston. After it opened in 2005, there was no turning back. 1704 Washington Street, Boston, 617-536-4300, http://www.tororestaurant.com

Devra First is the Globe's restaurant critic. E-mail her at dfirst@globe.com.