Tavern near the green 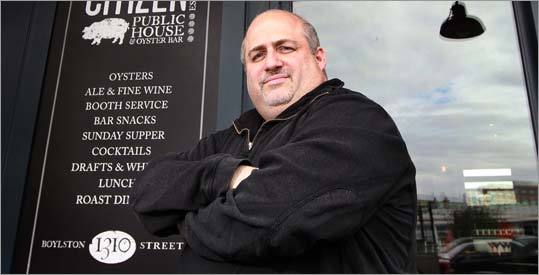 How did you finance the first Franklin Cafe? I was 29. The restaurant opened on credit cards. At that time, everyone was sending out credit card applications. We mailed them in. Sure enough we got them all back. My business partner, Maureen McLaughlin [“Mo”], got $20,000 from her parents. Mo was one of Boston’s premier bartenders.

The original Franklin is still mobbed. The South End is only nine tables. Early in the evening it’s like a real restaurant, late it becomes an urban chic restaurant, at the end of the night it becomes an industry place.

Your restaurants are all like their neighborhoods. Southie has a loft-like feel because it’s in an area that has a lot of lofts. The Franklin in Gloucester has an Old World feel, like a place in one of those bow fronts. There are loyalists in each of those locations.

How is Citizen Public House & Oyster Bar different from your other restaurants? A lot of roasting. With 72 hours’ notice, we’ll roast a whole pig for 10 people. We’re going to roast pork loin with melted cabbage and warm applesauce, we’re going to do a roasted whole fish. We have a full oyster bar. There’s a little more elaborate bar program: Napa wines on tap in kegs, 80 whiskeys.

You began with the idea of an English pub. Citizen sounds American. We went to London, to 60 gastropubs – me and Phil Audino and Brian Reyelt, partners who came in seven and eight years ago. English pubs have to serve a lot of purposes. Everyone meets for Sunday supper, they go after work to pull a pint of beer. It’s the social activity. For the most part, people go to the pub in their neighborhood. Once we got there, we realized we didn’t want to be an English pub as much as we wanted to be an American tavern.

What else did you learn? London doesn’t really have these neighborhood joints the way the States do. The pub culture fills that gap. London would be a great place for a Franklin Cafe.