A hangout spot for grown-ups 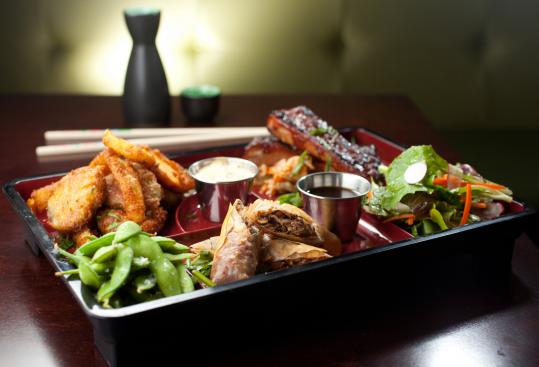 You work hard, open a new restaurant, start to see success, then bam! The heavens open up, the rains pour down, and almost as soon as you’ve opened, you’re closed. This is what happened at Think Tank, a groovy little rec room devoted to Asian flavors, mixed drinks, and good music. Launched in June, it shut in July, the basement space disastrously flooded. Would it reopen?

It would. At the end of September, Think Tank was back — photo booth, video games, vinyl-spinning DJs, and all. We should celebrate its triumphant return, not just because it’s good to see a local business back on its feet. Think Tank is one of those great hangouts for grown-ups that grown-ups are always on the lookout for. It’s fun, relaxed, welcoming, and well located, in the 1 Kendall Square complex — an alternative to the Hungry Mother-Emma’s Pizza-Blue Room-Friendly Toast rut that’s been worn into that part of Cambridge.

Think Tank has termed itself a “bistrotheque.’’ It has a pared-down retro vibe, with vinyl booths and mod light fixtures (sadly, no shag carpet). A U-shaped stainless steel bar anchors the room. In spirit, the place seems more oriented to good times than good food, so it’s a pleasure to find a menu of carefully prepared, exuberantly flavored bites and bistro twists. Chef Collin Davis has worked at places like Toro and the Franklin, but here his food heads east, with a rucksack full of kimchi and sriracha.

The best thing to do at Think Tank, at least until you figure out which appetizers you like the best, is order a bento box. The Japanese lacquered containers are samplers, with each compartment holding a small portion of a different snack. It’s after-work-with-a-beer nirvana.

There are two versions, both of which come with edamame. Bento A also offers cold peanut noodles, disappointingly mealy and lacking flavor. But its fish and chips are excellent — light, crisp batter, moist haddock, and thick planks of fried potato. Also included: pork belly that’s been rendered into a crunchy bark, its salty, smoky flavor concentrated. I miss the texture of the fat. Sriracha wings taste more like really good Buffalo wings, with the vinegary mien of Frank’s hot sauce. I love the idea of sriracha wings, so I wish the rooster sauce would crow a little louder, but these are still completely inhalable.

The highlight of Bento B may be a serving of fried pickles. Davis goes beyond dills, adding pickled carrots and onions to the mix. Cloaked in golden-brown batter, they’re a great bar snack. Another compartment contains a salad of lively fresh herbs such as cilantro and mint, radishes, and sweet and citrusy vinaigrette. Spring rolls incorporate duck confit and shiitake mushrooms; ribs are sticky and tender with just enough chew; they’re made from heirloom pork and come with house-made kimchi.

The bento boxes and Think Tank’s Seoul burger are most likely to become its signature dishes. The latter brings the joys of bibimbap to a bun. The beef has been marinated in the style of Korean barbecue. The patty is topped with a runny egg and sriracha aioli. You get sweet potato fries or greens on the side, as well as kimchi, which you can eat on its own or add to the burger.

It all requires a beer, and you’ll find a range from Sapporo and Schlitz to Long Trail Imperial Porter. Sake and soju are also on offer, as well as a short list of creative house cocktails made by bartenders you may recognize from places like the Gallows and Pho Republique. (Try the Thai chili daiquiri, which tastes like a spicy caipirinha. The heat is warm and lingering.) The wine list is disappointingly uninspired — there’s that Kung Fu Girl riesling and Burgans albarino again, that Cortijo tempranillo and Cono Sur Bicycle pinot noir. Why not just offer an interesting house white and house red and be done with it?

If Think Tank isn’t a wine kind of place, it doesn’t seem a lobster roll kind of place either, but there’s one on the menu. (Davis is from Maine, so it’s mandatory.) The lobster is fresh and sweet, but lemon pepper aioli isn’t enough of a twist for this dish to feel at home on this menu. A lobster banh mi would work, but there’s already a banh mi here. The sandwich includes your choice of roast pork loin, duck confit, or smoked eggplant, plus lettuce, herbs, carrot pickle, and cumin aioli. It also fails in the bread department. A banh mi must be on crackling fresh baguette; this bread is leaden.

Ramen is another dish that must be done right, and here it is done wrong. The broth is bland, and what’s in it? Okra, bell peppers, and green beans? And — soba noodles? May the ghost of “Tampopo’’ writer-director Juzo Itami haunt Think Tank until this dish gets fixed (or at least renamed).

But entrees like duck confit and green curry are so good, one can forgive the ramen misstep (soba!). The confit is perfect, juicy meat beneath skin like a crisp sheet of rice paper. It’s served with a sassy take on the iceberg wedge — the lettuce is grilled, and there are apples, lardons, and gorgonzola to complete the mix. It’s classic, yet not.

Green curry is also classic, it’s just not something one tends to see outside a Thai restaurant. The same vegetables that appeared in the ramen make more sense here, in a deeply fragrant, nearly floral house-made green curry sauce ladled over jasmine rice.

Dessert is more creative than successful. A dish called “coffee and donuts’’ is the one everyone immediately wants to order. It’s a great idea: Turkish coffee mousse with warm beignets. But the doughnuts are skinny circles of dough with the texture of soft pretzels, not plump, sugary morsels. And the mousse is dense and cold — definitely not dippable.

On a Friday after work, Think Tank is so crowded one must yell to be heard. Staff members play the service industry version of Whac-A-Mole, getting to customers as quickly as they can, maybe missing a few here and there. Original Boston hipster Brother Cleve spins lounge and Tiki selections until 8; a big group of 20-somethings clears out, leaving a roomful of 40-somethings with small, carefully manicured patches of facial hair and Kangol caps. Where you younguns going so early?

But on a recent Tuesday, the place is so mellow the host is catching up on his knitting while he mans the door. Why aren’t you here? The floods have subsided, and Think Tank’s right as rain.

Noise level Can be very noisy.