The restaurant is opening at a time when grilled cheese sandwiches are being eaten less outside of the home. Grilled cheese consumption in restaurants is down 11 percent for the year ending in June, according to NPD Group, a market research firm in Rosemont, Ill. By contrast, in June of 2009, consumption was up 13 percent from the same period a year ago.

“We don’t order much in restaurants,’’ said Bonnie Riggs, an NPD analyst who explains that Cheeseboy’s biggest competitor will be at-home preparation. “We want our grilled cheese at home.’’

Despite the decline, Cheeseboy founder Michael Inwald said there is a market for America’s beloved grilled cheese sandwich, which he calls “a part of national culture.’’ He said consumers are turned off by restaurants that offer gourmet cheese sandwiches at a high cost, but they will like the affordability of his menu. For instance, a Cheeseboy “Cheddar Delight’’ sandwich, with cheddar cheese on rye bread, is $3.79. By comparison, the average price of a grilled cheese sandwich in full-service restaurants is $6.58, according to Technomic Inc., a research firm in Chicago.

“The concept of grilled cheese is oftentimes sit down, but their price point is high, and they are trying the gourmet angle,’’ said Inwald, 29, a New York native who avoided the high overhead costs of sit-down restaurants with a to-go concept. “Ultimately, grilled cheese is a comfort food that shouldn’t be too expensive.’’

Susannah Osborn, 62, of Wenham agrees. She ordered a cheddar on Italian bread yesterday, en route to catching a train to New York City.

“I devoured my grilled cheese,’’ Osborn said. “It was next to the ones my mom used to make when I was little. Probably the best one I have ever had.’’

Still, some analysts say specialty to-go menus like Cheeseboy’s pose a challenge for a developing brand. After all, the percent of all restaurant orders that include a grilled cheese sandwich is 0.3 percent compared with 15.4 percent for hamburgers, according to NPD.

Additionally, there’s plenty of competition, including fast-food restaurants such as McDonald’s and Subway that offer $1 or $5 menu items. And Dante of Cambridge holds “Grilled Cheese Tuesdays,’’ offering half sandwiches for $2 in its lounge and bar, and Petit Robert Bistro’s restaurants in Boston and Needham offer croque monsieur, the French grilled cheese with ham, for $6.75.

“These concepts get too successful, then others add the items to their menus,’’ said Ron Paul, president and chief executive of Technomic, noting grilled cheese is a menu selection, not an entire concept.

Paul said the viability of the brand depends on the location. South Station is consistent with the “grab-and-go’’ style menu, but like any high-traffic area, food vendors succeed at the will of the consumer. “It is the same thing in any food court, the consumer decides what they want,’’ he said.

Indeed, Cheeseboy will have to contend with other food vendors at South Station, which include McDonald’s, Cosi, and Au Bon Pain. “We believe we are one of the stronger brands there,’’ said Ed Frechett, vice president of marketing at the Au Bon Pain chain in Boston. Still, “We welcome new ideas. It will bring more people.’’

Inwald said he dreamed up the grilled cheese restaurant concept after friends and family were impressed with the quality of his homemade version. Last year, he took a leave of absence from earning his MBA at Yale University and invested $20,000 of his own money to test his sandwiches at fairs.

Inwald then got additional funding from a private investor and polished the Cheeseboy menu in the first restaurant pilot at Connecticut Post Mall, which opened in November of last year in Milford, Conn.

Cheddar, American, light Swiss, Muenster, and provolone make up the menu, along with Italian, rye, multigrain, and wheat bread. Customers can add vegetables and meats to their grilled cheese, including ham, bacon, pickles, and jalapeños. The selections were expanded with the help of feedback and suggestions from the pilot.

Inwald declined to give sales figures from the pilot, but said: “We found out there is demand for my particular grilled cheese.’’ 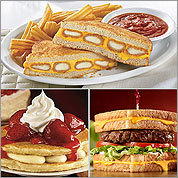