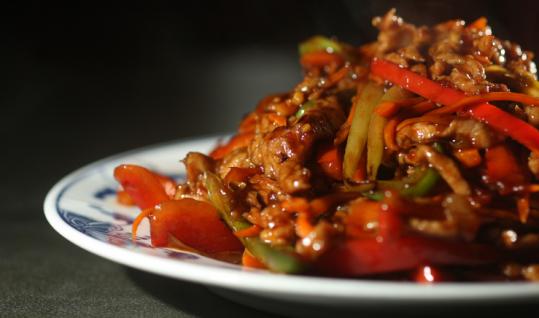 Every weekend by 11 a.m., a line for Taiwanese brunch forms outside Chung Shin Yuan in Newton. At 11:30, there’s a rush for tables. Brunch is over at 2:30. Arrive too late, and you’re left behind. Diners on a recent Saturday were nearly all Asian, with a smattering of adventurous foodie types sampling 41 items that vary from the accessible (spring rolls) to the odd (spicy chilled pig ear salad).

When the waitress comes, her attention is limited. And don’t taunt her by asking for extra water, or rice. She may never return.

The food is interesting, and often delicious. Large pan-fried buns ($4.50) are prepared using a traditional steam-fry method. Twice-risen dough is wrapped around a cooked filling of pork, chives, onions, and spices. Bottoms are golden-crisp fried, tops are creamy steamed. Both complement the filling, which, after cooking, swims in a savory, encapsulated broth.

Chinese fried dough ($1.95), airy and baton-shaped, could become an obsession. It’s delicately crisp and glistening on the outside, and best eaten seconds after arriving at the table. Shao-bing, a flat sesame-coated bread ($1.95), makes a hearty entree in a five-spice beef sandwich ($3.95). And spicy stewed beef noodle soup ($7.25) is an oddly comforting late breakfast, with complex spice, pleasantly fatty beef, and no distracting vegetables.

A favorite is pan-fried white turnip cake ($4.25), a fun plate of perfectly triangular two-bite cakes with crispy geometric sides and a mildly savory center. The cake contains no turnips, but rather finely grated Chinese radish (daikon) and rice flour.

The menu does have its hazards. Some dishes are simply too challenging. Fried chitlins, for one, have an alarmingly visceral taste and texture.

Turnip cake is one of the few items on both brunch and regular menus. Dinner offers a choice of 130 traditional Taiwanese and Chinese dishes. Most are competent but unremarkable, and the service — if this is possible — is even less attentive. Szechwan shredded spicy beef with celery (below; $9.25) is one standout. The rare dark soy meaty flavor manages to be perfectly spicy, salty, fresh, and crisp all at the same time. You’ll need to ask for rice — if you can get a server’s attention.

There are really two restaurants here: a neighborhood Chinese place that’s not that welcoming, and a great Taiwanese brunch that’s a destination. Ike DeLorenzo can be reached at ike@theideassection.com.