The talk of Towne 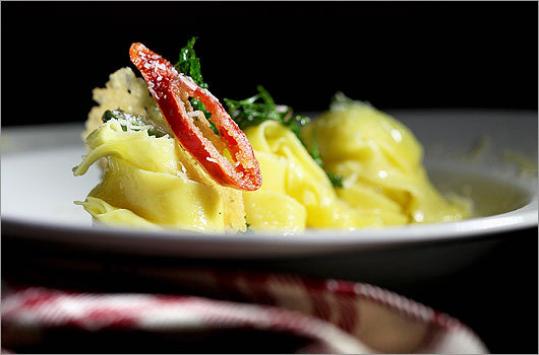 The fettuccine Alfredo is one of the highlights at Towne Stove and Spirits (Wendy Maeda/Globe Staff)
By Devra First Globe Staff / October 6, 2010

Towne Stove and Spirits is 13,000 square feet of overstimulation. There are two levels, three bars, three dining rooms, almost 400 seats, and more than 50 dishes that flit from continent to continent like a hippie trekker following his bliss. To even reach the hostess station, one must first penetrate a scrum of socialites and post-work partiers at the bar by the entrance. This requires pantomime and pushing — no one will hear your polite “pardon me.’’ Holler the name your reservation is under, and maybe you’ll be in luck. Or maybe you’ll have to wait 10, 20, 30, 60 minutes if Towne is busy. Towne is almost always busy.

Opened at the end of July, it is located in Hynes Convention Center, in a part of Back Bay that lacked such a venue and was ready for one. But the restaurant’s pedigree is what is really creating buzz. It’s a collaboration between night-life magnate Patrick Lyons and a pair of New England’s most famed chefs, Lydia Shire (Biba, Locke-Ober, Scampo) and Jasper White (Jasper’s, Summer Shack). Old friends, the two have shaped Boston’s restaurant scene over decades of chowder and pan-roasted lobster, lobster pizza and elaborate offal preparations. If they hadn’t made these dishes, how would we be eating now?

Towne is a blur of colors, noises, and tastes. The decor is a conglomeration of barn-wood beams, reflective ceilings, long windows, and chandeliers shaped like outsize slide carousels. The second floor features a glassed-in kitchen, and you can watch chefs play with knives as lobsters lie on the grill like sunbathers in hell. There’s a wood-fired rotisserie, a tandoor, and what may be the most beautiful vintage stove ever, a copper beauty turned outward, for display only. Beakers double as water glasses. Waiters’ outfits steer far clear of the sober monochromes favored at other establishments. They wear red and gray vests, the backs festooned with a pattern of swirls. Towne doesn’t do restraint.

On the menu itself, everything is a jumble. Type runs vertically, then horizontally. Category headings don’t match up — “ocean’’! “carnivore’’! Some dishes (but not all) are marked with their country’s flag. Burgers and lobster rolls fly the stars and stripes, ravioli and porchetta are marked as Italian, and Peking chicken with potpie as Chinese. Is this Boston or Epcot? And why is the menu laminated?

Then there is the quirky verbiage. Several beef items are described as “xtreme,’’ yellow split peas are “quite unctuous,’’ and fettuccine Alfredo is “the truth as it was invented for our friend paul pierce.’’

It’s a name-dropping kind of place. I have yet to visit when I don’t see at least one Person of Interest. ( owner Wyc Grousbeck is an investor, which may account for a strong team presence. Or maybe Doc Rivers just likes the white sangria.) Mario Capone, Shire’s longtime right-hand man, is executive chef. This gives Shire leeway to roam the room, getting her schmooze on. At some tables, she pulls up a chair. At others, she delivers a dish wordlessly, her gaze already moving on. “Do you know who that is?’’ a server asks kindly in her wake.

Yes, and expectations are high. Some of Towne’s dishes are as good as you’d expect from this team. There are light, eggy lobster popovers, part of a separate all-lobster menu. Attached to a stick, it doubles as a fan, for those moments when contemplating lobster dogs and lobster melts gets to be too much. The use of lobster to luxe-ify comfort food is by now a Boston tradition, and if we have anyone to thank/blame (choose your verb) for this, it’s Shire herself. So a whole list of such dishes is appropriate. Her famous lobster pizza is reserved for the main menu, however. It is topped with lobster, corn, ricotta, and just enough honey to register, a perfect sweetness that lingers after each bite is gone.

As for that fettuccine Alfredo, I do believe it is the truth. The dish, usually heavy and gummy, is here something else altogether: golden and toothsome and light. Long strands of pasta, more like pappardelle, are mounded into nests, barely cloaked in cheese and butter. There is no cream. It’s hard to believe something made out of almost nothing can be so delicious.

The menu is marked by exuberant dishes that communicate Shire and White’s glee at working together again for the first time in years. That Peking chicken and potpie is an impressively lacquered red-brown half-bird with crisp, glazed skin. It gets an extra zing of flavor from a little dish of salt mixed with five-spice powder. Dunk or sprinkle — the stuff is intense. The daikon potpie that comes with the chicken lends more humor than flavor, but greens spiked with ginger juice compensate. The plate comes with a winking punctuation mark: a bright pink cocktail umbrella.

Beet carpaccio is so beautiful a table of hungry people can barely bring themselves to eat it. It’s vegetable eye candy, rounds of yellow and red beets topped with cubes of pink watermelon and feta, everything placed just so: a little modernist sculpture garden of a salad. The flavors don’t have the same pop as the presentation, however.

In a cod entree, New England is deconstructed on a plate. A bit of thin chowder pools around the fish, which is topped with a handful of clams. It’s served with thick and luscious tartar sauce, its texture approaching that of creme fraiche. Clever without rubbing your nose in it, merging high and low, traditional yet creative, the dish modestly distills and merges the White and Shire traditions.

But the uneven kitchen serves up more than its share of duds, perhaps unsurprising for a new restaurant of this size. A duo of tartare features sustainably raised Cleanseas bluefin that’s pallid in flavor. It’s paired with sirloin tartare, which is better by virtue of being laden with pungent capers.

Porchetta, available on Wednesdays and Sundays, is a dry, hulking piece of pork prepared on the rotisserie. The best part of the dish is the broiled peaches that come with it. And chicken “brick’’ style is a bird flattened like road kill that tops the porchetta for tastelessness, although it is dressed up with bits of gold leaf. Other dishes — chewy razor clams a la plancha, bland short ribs — are simply forgettable.

Towne is fortunate to have Maggie Scales as pastry chef. She builds inventiveness into classic, flavor-packed sweets. A brown sugar angel food cake, light as ever but with a warm flavor, comes with bruleed brown sugar, excellent caramel ice cream, and an impressive puff of maple cotton candy. Warm dark chocolate cake gets extra dimension from cherry gelato and splendid, syrupy Amarena cherries.

The wine list is designed to suit everyone from tourists on a budget to high rollers looking to impress. (The restaurant’s PR people have stressed that this is a restaurant for everyone, at every budget, but realistically the average tab per person is likely to be $50-$100 after tip.) All of the beers on tap are local, from Cisco’s Sankaty Light Lager (Nantucket) to Mercury Brewing Company’s Clown Shoes Black IPA (Ipswich). Results are mixed when ordering cocktails, but the Towne daiquiri compels, taking a page from the lobster pizza with a beguiling touch of honey.

In an atmosphere this chaotic, service might be a disaster, but it’s not. Wish for chopsticks and they arrive. Admire a server’s pen and he’ll try to give it to you. Bread baskets come with a lengthy preamble explaining the varieties and dips. Hosts are kind and apologetic when tables aren’t ready, rather than copping attitude. In a restaurant that has attained instant popularity, this isn’t a given.

For those looking for a scene, an experience, Towne is just the ticket. For those in search of a predictably excellent dining experience, this is not it, not yet. On a menu of 50-plus dishes, consistency manages to get left off.

Correction: Because of a reporting error, an earlier version of this review, incorrectly characterized Towne Stove and Spirits’ policy on charging for bread basket refills. The restaurant stopped charging about a month ago.