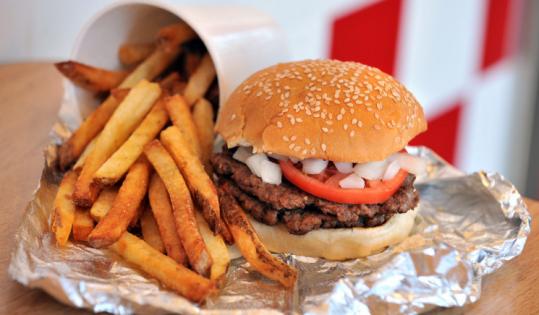 The guy waiting next to me leans back against a stack of sacked Idaho potatoes and emits an amused sigh. “It’s a new concept,’’ he says to his friend. “Slow fast food.’’

He’s right, but that doesn’t keep the Natick outlet of Five Guys Burgers and Fries from jumping on a Saturday night. The Virginia-based chain, which only recently expanded here, already seems to be working its cultlike hypnotic powers on the burger-buying public. So what’s the attraction?

Partly it’s the novelty — a burger joint without golden arches — and partly it’s the friendly, retro-chic feel of the place, with its red-and-white tiles and open “kitchen.’’ It’s just a long steel griddle, a couple of deep fryers, and a counter where the resulting burgers are assembled, wrapped in foil, and shoveled into an iconic, grease-spotted brown paper bag with a heap of fries.

Oh, and the food? Five Guys’ signature product will never replace a real hamburger, but as a quick, flat, superheated slab of chopped meat it’s not bad. Signs proclaim that all burgers are served “well done and juicy,’’ which sounds oxymoronic until you sample the damp, almost steamed-tasting beef in its equally soft bun.

The good news is the toppings: 15 of them, all free, and ranging from the commonplace ketchup through onions (both raw and grilled, a nice touch), jalapenos, and A-1 Sauce. The Midwesterner in our group thrilled to the homey pleasure of a “little hamburger’’ (that’s a single patty, as opposed to the double of the “hamburger,’’ which is all more confusing than it needs to be) with mustard and grilled onions ($3.59); the New Englander, smelling a bargain, went straight for a bacon cheeseburger “all the way’’ ($6.29), meaning all the toppings in a sloppy yet weirdly satisfying mess.

Both were tasty, greasy, and dense, and honestly took only a few minutes longer than fast-fast food. (And you can pop a few free peanuts while you wait.) There’s also a decent hot dog, but skip the “veggie sandwich’’; it’s just all the toppings slapped on a bun.

In any case, the real reason to go back — either to Natick or to the new Walpole outlet, smaller and quieter but otherwise identical — is the fries. Not the Cajun, which we found fatally salty and weirdly redolent of instant-ramen flavorings, but the “Five Guys style’’: hand-cut, fried in peanut oil to crisp yet tender golden goodness, and generously portioned. Now that’s worth waiting five minutes for. Louise Kennedy can be reached at louisekennedy330@gmail.com.

May we suggest Little hamburger with grilled onions and mustard, bacon burger all the way, fries Five Guys style, free peanuts in the shell.