Riches from the Silk Road 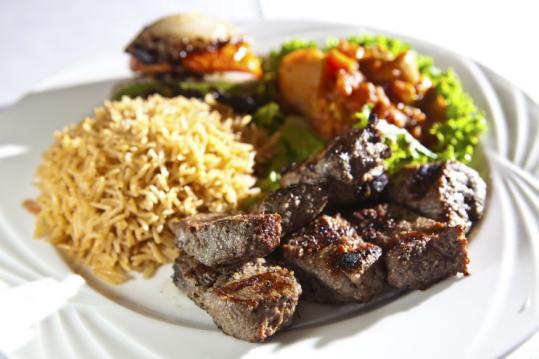 The waiter sets down a basket of naan (hot from the oven) with three sauces: yogurt, cilantro, and hot pepper. We tear apart the puffy, yeasty rounds, and spoon the condiments on them. When that seems slow going, we drag the delicious bread through the sauces to mop them up.

Four-month-old Ariana is an upstart rival to the area’s best-known Afghan restaurant, The Helmand in East Cambridge, and chef Zahir Mohammad and owner Najeeb Rostami spent some time in the Helmand kitchen. While their own establishment isn’t quite as stylish, the 60-seat dining room has the same warm tones, with mustard walls, gold-framed artwork, Oriental rugs, burgundy upholstered banquettes, and fine stemware.

Afghan cuisine, Rostami says, isn’t similar to Middle Eastern, Indian, or Pakistani. But it is! Naan tastes like a cross between the Indian bread and pita fresh from the oven, as you get it in the Middle East. Afghan cuisine is very fresh, rice-based, and a dish of lamb cut into large chunks, served with rice, is called shish kabob (pictured, $14.95). In a departure from Indian tradition, nothing is particularly spicy; even if something says curry, it’s hardly detectable.

Pastas are brilliant. Mantu ($5.95), described as stuffed “pastry shells,’’ is, in fact, feathery pasta shaped into square packets, filled with meat, served in a pool of overlapping sauces, one with yogurt, another with beef. Aushak ($5.95) is nearly identical, but filled with leeks. Bowlawni ($5.95) are long, crisp, deep-fried strips of pasta, one stuffed with leeks, the other with potatoes, set on minty yogurt.

Many dishes come with one of two rice preparations. Challow is white, tossed with cumin seeds; pallow almost rust-colored, flavored with cinnamon, nutmeg, and cumin.

One waiter is moving around the room gracefully, but he has his hands full. Word is out that Ariana’s food is remarkable. Dinner ends with bucklawa ($4.95), which is nothing like baklava. This is an addictive, dense, walnut, almond, pistachio and caramel pastry. Homemade vanilla ice cream with pistachios and cardamom ($4.95) is heaven in a bowl. If food could bring peace to a region, I would nominate Ariana to do the cooking.