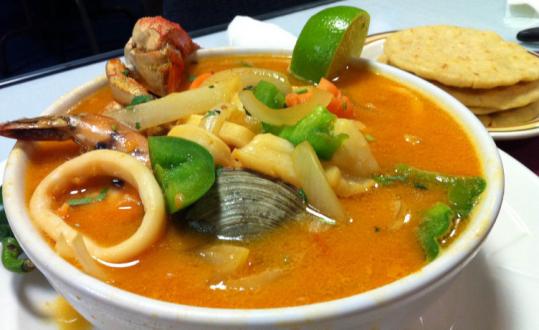 The lighting could be better. Fluorescent ceiling squares with frosted plastic diffusion panels give the cavernous dining room a bright bluish pall. And the TV is hard to ignore. The mounted television blares a telenovela’s low-fidelity ebb and dramatic flow: moue, slap, cue crescendo.

Then sopa de mariscos (pictured) arrives and suddenly nothing else matters. The deep bowl of seafood stew features scallops, clams, mussels, calamari, and crab. The large version (for two) adds half a lobster.

As good as the seafood is, the star of this dish is the rich, pale-orange broth. Homemade stock is seasoned with adobo (a mix of ground chipotles, cumin, oregano, and other spices), garlic, black pepper, and achiote (a spice containing the natural golden orange coloring agent annatto). Seafood in its shells is cooked in the soup, and served with a large jalapeno and half a lime.

Lopéz, a native of El Salvador, opened Topacio in 1994, after 10 years as a line cook at Durgin Park. His standout steak these days is an interesting take on the traditional carne a la vinegreta, where a thin steak is quickly pan-fried with lemon juice, vinegar, garlic, and white wine. He adds a splash of lobster sauce, which makes it rich and creamy, and serves the tender half-pound meat with a half-lime and, again, a whole jalapeno on the side. To cool down between bites, there’s cashew agua fresca, a light, sweet, and earthy drink.

My dining companion describes the tacos here as “the best since I had one off the food truck in some industrial neighborhood in San Francisco.’’ It’s high praise, and I agree. I also found myself remembering San Francisco — a center for excellent Salvadoran cuisine — when I tried pollo encebollado, grilled chicken smothered in sauteed onions, with achiote and spices.

Diners at Topacio are overwhelmingly Spanish-speaking, and many appear to know the owner and staff. Avoid driving and the $3.50 tunnel toll by taking the T. It’s a pleasant 10-minute walk from the Airport stop on the Blue Line.

I will charitably call the service casual. Don’t come when you are in a hurry. There’s plenty of time to snack on thick, warm, house-made tortilla chips, excellent salsa, and a purists’ guacamole (no distracting garlic or cilantro). “We make each dish by order, nothing is prepared in advance,’’ explains Lopéz. It’s worth the wait.